H.E. Ilan Mor, The Ambassador Of The State Of Israel Visited Vác And Százhalombatta 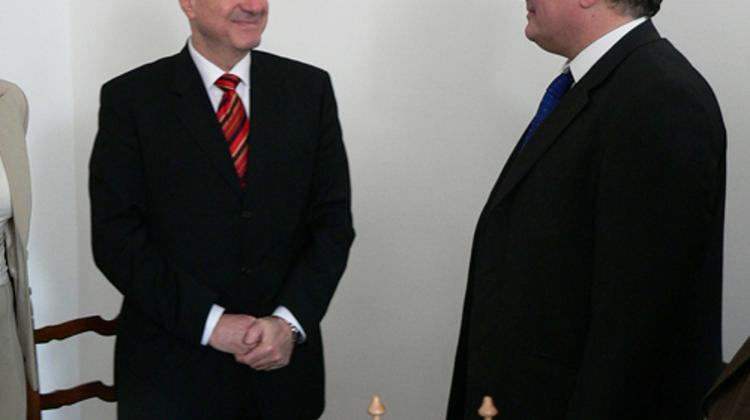 "Ilan Mor, the Ambassador of the State of Israel accredited to Hungary continues his visits to the countryside where he is about to meet with responsible leaders in all fields of life. This time he visited Vác on March 13. In the Mayor's Office he met Mayor Attila Fördős, Deputy Mayors Tibor Pető and Zoltán Mokánszky, Lajos Varga Assistant Bishop, Zoltan Nemeth President of Vaci Gypsy Minority Self-government, and János Turai was also present, who is the President of the Jewish Community and the Hungarian-Israeli Friendship Association.

The Ambassador informed the mayor of the city and those present about the internal and foreign affairs political situation in Israel, talked about the importance of the sister city relations of Vác & Givatayim. Each party believes that these relations have to be strengthened and revived and the Ambassador promised to contribute to it. Then the Mayor provided information about the economic, commercial and cultural life of Vác.

After the visit in the City Hall, they walked together to the synagogue, where János Turai explained the history of the church. He talked about the funding of the renovation work that beside the own sources, in addition MAZSIHISZ, the local government, the episcopacy, and funds were used for the project to be carried out. They also visited the Jewish cemetery, where they looked at the Holocaust Memorial Park that commemorates Jews who were deported from Vác and the surrounding area.

In noon time at Boronkay Technical High School & College H.E. Ilan Mor delivered a lecture to more than 200 students and their teachers about Israel today. The Ambassador finds it very important that the young generation should get acquainted with Israel through the spirit of innovation that characterizes the country and get to know the successes in all fields of culture and high-tech and learn about the great number of Israeli Nobel Prize laureates. H.E. Ilan Mor suggested Director Gábor Fábián that they should contact a similar Israeli high school, promised to help and finds it important that there would be exchange of students between the two schools. The Director supported this idea and hopes that in the future students can share experiences with one another.

The last event of the visit of the Ambassador was visiting the Nagyboldogasszony Cathedral, where Lajos Varga Assistant Bishop spoke of the history and construction of the church.

On Sunday H. E. Ilan Mor visited Százhalombatta and met with Mayor Mihály Vezér, and together they opened the Auschwitz Album wandering exhibition."