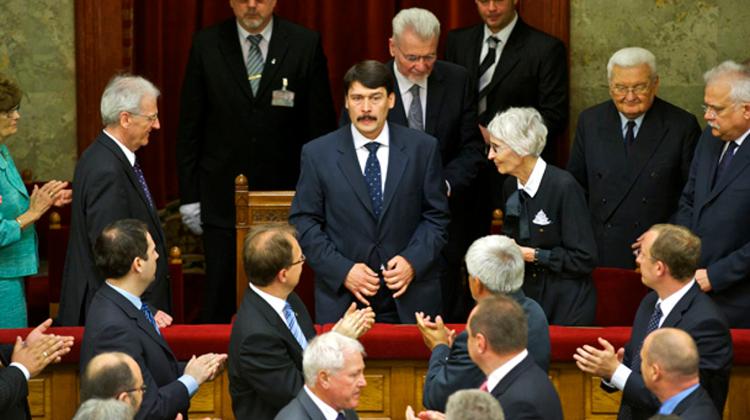 Yesterday the Hungarian parliament elected János Áder, 52, to be the 5th president of the Republic since the change of political system in 1989/90. He called upon Hungarians in his acceptance speech to show one another respect even if they disagree. Áder said he would reach out to all sections of society and to Hungarians around the world. "Let me reach out to believers and to non-believers alike, and ask them to see in each other what unites us, as understanding one another will enrich us all," he said. The new president will take up his post on May 10, read on for what the Hungarian PM had to say about him, and more from Áder's acceptance speech including his view of Hungary's controversial new constitution.

"It is my earnest belief that we Hungarians will be able to prove our vitality only if we are able to discuss our problems, gently on occasion, fiercely on other occasions and if need be, but always maintaining our respect for one another," he said.

He also stressed the importance of upholding Hungary's new constitution, which took effect on Jan. 1 this year.

"As president of Hungary I will spare no efforts to fulfil my share of that responsibility as stipulated in the Basic Law. Likewise, I am sure that all of you expect me to avail myself fully of both my constitutional rights and obligations," he said.

"Our Basic Law declares that Hungary is an independent and democratic republic governed by the Rule of Law. It is based on universal human values and our national traditions. I am convinced that our new Basic Law outlines the right track and the right framework for us to always find the right answers as a political nation to the basic questions and challenges of the 21st century."

Ader, nominated by the ruling Fidesz-Christian-Democratic alliance, received 262 votes in favour in a secret ballot.

Prime Minister Viktor Orban said on Wednesday that parliament had made the best possible decision by electing Ader. Describing him as an "anchor", Orban told journalists the decision had been the best one for the task of "setting in motion and stabilising" the constitution.

"We know the president, we respect him and think highly of him ..." he said.

After being elected Ader took his oath of office and signed the oath documents. He then was congratulated on by Prime Minister Viktor Orban, Parliamentary Speaker Laszlo Kover, Deputy PM Zsolt Semjen and four parliamentary group leaders.

He then proceeded to shake hands with his predecessor Pal Schmitt, former Prime Ministers Peter Boross and Peter Medgyessy and Jozsef Palinkas, the president of the Hungarian Academy of Sciences.

Before the election of the new head of state, Sándor Lezsák, Deputy Speaker of Parliament and acting Speaker, gave an account of the career of János Áder, nominee for President of the Republic.

Mr. Lezsák described how Mr. Áder’s life has taken him from a small provincial town in Hungary to the European Parliament, and now to candidacy for presidency of Hungary. He described Mr. Áder as a straightforward man of humble origins, which have provided him with the moral foundations for a life in public service as an MP, Speaker of the House and MEP, among other roles. He described him as well-versed in the complexity of legislature, and no stranger to hard work.

While still a law student in Budapest, the death of his father meant that at times he had to take on night work to pay for his studies. In the opposition roundtable negotiations of 1989 he gained his reputation for determination and straightforwardness. At the same time, Mr. Lezsák praised Mr. Áder for his openness and willingness to take part in debate, whilst always doing his utmost to uphold the values and principles he expounds.

Mr. Lezsák gave a brief summary of the prospective president’s political career. Mr. Áder took part in the historic meeting in the Hungarian settlement of Lakitelek in 1987, at which the first opposition party was formed, and he had an important role in the formulation of the democratic electoral system at the Opposition and National Roundtable talks in 1989. He became an MP for Fidesz in 1990, and took part in the work of the Parliamentary Constitutional Legislative and Justice Committee.

Orban nominated the Fidesz MEP for the post on April 16 after Pal Schmitt resigned in the wake of a plagiarism scandal. Ader will take up his post on May 10. He has sixty days to relinquish his post as an MEP.

A total of 307 lawmakers registered to vote and 302 votes cast were valid. Forty lawmakers voted against Ader, who will hold office until 2017. The opposition Socialist and LMP parties and lawmakers belonging to the Democratic Coalition party did not participate in the vote. Jobbik MPs voted against.