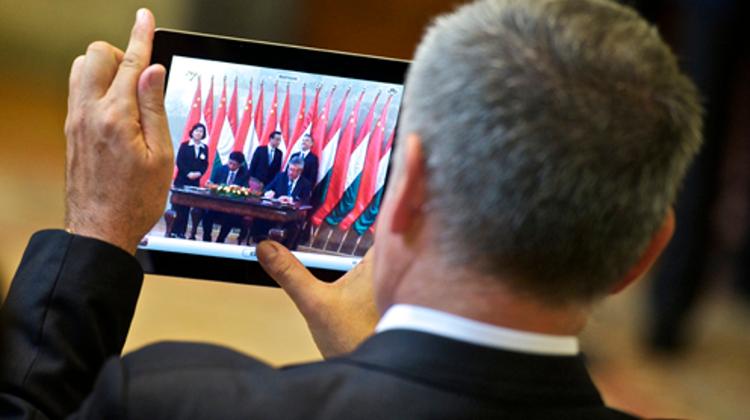 Hungary and China signed seven agreements. The agreements were signed on Tuesday in the Parliament Building in the presence of Hungarian Prime Minister Viktor Orbán and Chinese Deputy Premier Li Keqiang.

Minister for National Economy György Matolcsy and the Vice-President of the China Development Bank signed an agreement on the planned utilisation of a development facility worth one billion euros to be provided by the bank.

An agreement was also reached by György Matolcsy and the Vice-President of Huawei regarding the construction of a European logistic centre in Hungary for the Chinese corporation manufacturing telecommunications network equipment.

The Ministry for National Economy entered into a cooperation agreement worth some EUR 10 million with the corporation ZTE with respect to a European regional network management centre project to be implemented in Hungary by the Chinese telecommunication company.

MÁV, the Hungarian railway company and the Chinese railway company also concluded a cooperation agreement on the promotion of the fast railway line project that connects the Liszt Ferenc International Airport with Budapest’s Keleti Railway Station.

A memorandum of understanding was signed for the purpose of promoting cooperation between SME businesses, and the Ministry of Rural Development and the Ministry of Agriculture of the People’s Republic of China entered into an agreement for the establishment of a Hungarian-Chinese scientific and technological centre.

Li Keqiang arrived in Budapest for a two-day official visit on Monday. He had talks with Deputy Prime Minister and Minister of Public Administration and Justice Tibor Navracsics and Speaker of the House László Kövér. A Chinese-Hungarian business forum was also held in conjunction with the visit of the Chinese Deputy Premier.

According to Viktor Orbán, Hungary and China look upon one another as strategic allies; in addition to its alliances in Western Europe, Hungary must also consistently embark on and bring to successful fruition a policy of opening towards the East. The Prime Minister said China is important for Hungary in the light of the wisdom of the proverb of „why stand on one foot when we have two”. He added, „if there is a strong wind in the world economy”, those who stand on one foot may easily fall, and Hungary must therefore stand on both its feet and must, in addition to maintaining its alliances in Western Europe, also pursue a consistent policy in opening towards the East.

We must stand on two feet both for the purposes of financial, development policy and investment policy criteria and from the respect of political friends and political allies, the Prime Minister said, adding that, with the visit of the Chinese delegation, we took an important step towards enhancing Hungary’s economic and financial security.

Viktor Orbán said in connection with the one-billion-euro facility that this is only a fraction of the money that has been made available for the development of the Hungarian economy. He said the Chinese are of the opinion that if we use the one billion euros for sensible and reasonable programmes, further funds will be made available which, if not unlimited, will be „well in excess of Hungary’s wildest dreams”. He stressed, in actual fact, Hungarian developments today are not restricted by financial constraints; the question is whether there are well-defined economic programmes also regarded as feasible and viable by members of the business community and whether the Hungarian private economy is able to present programmes which are worth financing from a Chinese-Hungarian development fund.

Viktor Orbán also made mention of the fact that he had received an invitation from Chinese Premier Wen Jiabao at last week’s Poland-Central-Europe-China economic forum held in Warsaw, and he would pay a visit to Beijing for the reinforcement of bilateral relations before the end of this year.

The Prime Minister stressed China regards Hungary as a stable country which has qualified work force and whose economic growth once again reached and slightly exceeded the European Union’s average. He added, China also deems Hungary stable from a financial point of view because while its state debt is around 80 per cent, Hungary has strong financial ties not only with the European Union and the IMF but also with the Chinese and other emerging markets which lend the country a high degree of stability.

The Prime Minister highlighted that a breakthrough was achieved in Chinese-Hungarian relations in June last year when the Chinese Prime Minister paid a visit to Budapest after more than twenty years. He said Hungary has consistently pursued a policy of opening towards the East ever since 2010, one of the key players of which is China, and the Chinese have a firm Central-Europe policy as part of which they established bilateral relations with the states they consider important, amongst which Hungarian relations are some of the most profound.

The Prime Minister pointed out the strategic cooperation of the two countries has also been extended to business, development policy and finances, in addition to culture and science, and the parties are now working on the development of cooperation between civil societies. The two countries will therefore receive hundreds of scholarship students in order to reinforce economic relations.