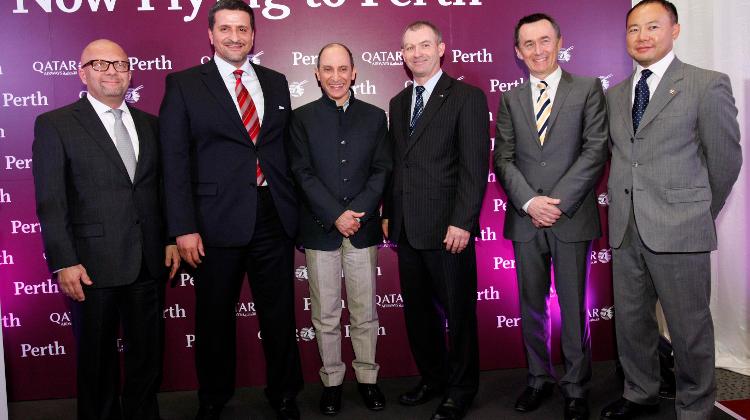 Qatar Airways today launched scheduled flights to the Western Australian city of Perth, officially marking the start of thrice-weekly services to the country’s mining and exploration hub. Perth becomes Qatar Airways’ second gateway in Australia after Melbourne – and the carrier’s 117th destination worldwide. It is also the latest of several route launches by the rapidly-growing global airline this year.

Operated by the award-winning airline’s flagship long-haul Boeing 777 aircraft, passengers will fly in supreme comfort, with fine dining onboard and access to more than 1,000 in-flight audio and video entertainment options in every seat.

Qatar Airways’ Chief Executive Officer Akbar Al Baker led a high profile delegation onboard the non-stop flight, QR900 from Doha to Perth, including His Excellency Mr. Pablo Kang, Australia’s Ambassador for Qatar based in the UAE, along with airline executives, as well as international and local media.

The delegation was officially welcomed to Perth by Deputy Premier and Minister for Tourism for Western Australia, The Honourable Dr Kim Hames MLA, for a special airport arrival ceremony that included a traditional ‘Welcome to Country’ performance by local Dance Troupe, Wadumbah.

"Today marks a very special occasion as we celebrate our arrival into a city that shows enormous potential and growth, both as a competitive tourism destination and as the hub of Australia’s mining and exploration industry.

“There has never been a better time to expand in Australia – a time when the Australian dollar is strong and business and leisure travellers worldwide search for easier and quicker ways to connect and do business.

“Our flight connections to Africa in particular will greatly please the people of Western Australia, whose strong links with the mining and business communities in East Africa signal enormous growth potential.

“Qatar Airways remains committed to opening up access to destinations that are largely underserved by international airlines and have great market potential. Perth is an example of this and 2012 will continue to be one of our biggest years of expansion addressing the underserved markets that our strategy has focused on.

“We sincerely look forward to growing the Perth route and we are already looking to improve frequency to a daily service by the end of the year,” added Al Baker.

“Tourism is the major economic driver in Western Australia and Qatar Airways arrives at a time when tourists and business travellers seek easier connections worldwide, as well as superior service that will easily exceed expectations.

“The people of Perth and Western Australia now have connections to more than 100 destinations worldwide, including Venice, Istanbul, Kigali, Nairobi, New York, London, Paris, Johannesburg, Zagreb, Athens, Sao Paulo and many, many more.”

Since the beginning of the year, Qatar Airways has begun services to Baku (Azerbaijan); Tbilisi (Georgia); Zagreb (Croatia), Kigali (Rwanda), Erbil (Iraq) and Baghdad (Iraq), with many more new destinations planned during 2012.