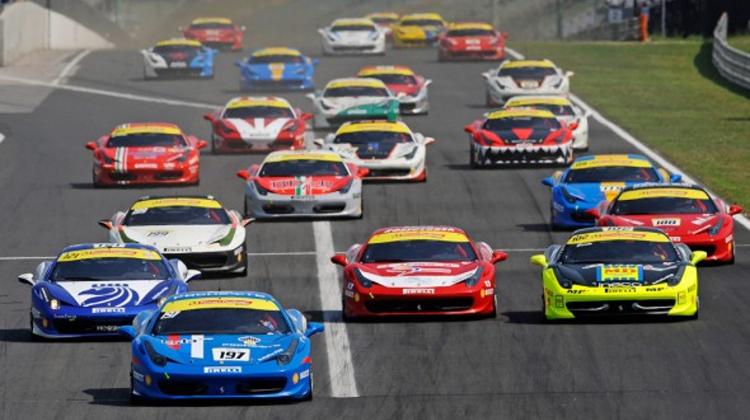 More wins in the bag for Alessandro Balzan (Trofeo Pirelli) and Alexey Basov (Coppa Shell) as they dominated both legs of the fourth round of the Ferrari Challenge at the Hungaroring today. Presenting the prizes to the winning drivers was Italy’s Ambassador to Hungary, Maria Assunta Accili, a guest of honour at the event, which drew a crowd of over 22,000 spectators.

Having secured both poles in yesterday’s qualifying, Balzan (Ferrari Moscow) took off into the distance to move into the lead of the overall classification, which until that point had been headed by his team-mate, Bjorn Grosssman. 9 points separate them, while in third, Niki Cadei (Motor/Piacenza) is 46 down.

Balzan’s winning margin in Race 1 at the Magyar circuit was over 14 seconds on Grossmann and 20 over Stefano Gai, who completed the podium trio, ahead of Russia’s Alexandr Skryabin, who staged a thrilling climb up the order from seventh place, to also win the Coppa Giovani. There was an identical finishing order for Race 2, with just the gaps changing: Balzan finished 9 seconds ahead of Grossmann and 13 ahead of Gai, with Skryabin agains the best of the Under 22s.

In the Coppa Shell, yet another win for Ferrari Moscow as Alexey Basov did the double, beating Italy’s Raffaele Giannoni (Motor/Piacenza) and the German Dirk Adamski (Autohaus Saggio) in Race 1 and then Giacomo Stratta (Forza Service) and Venezuela’s Fernando Baiz (Rossocorsa) in the second. Drives worth noting in the Coppa Gentleman from Giorgio Raffaeli, ninth overall in Race 1 for Kessel Racing and Vincenzo Sauto (Ineco MP) fourth in Race 2, at the end of some very close racing which featured 24 Ferrari 458 Challenge cars. With this result, Basov seems to be uncatchable in the Gentleman Driver category on 137 points, 33 clear of Raffaele Giannoni (Motor/Piacenza) although Stratta can entertain hopes of taking second, as he is 18 points off Giannoni.

As usual, the races were shown live on Sky Sport Italia, with repeats coming during the week, while the races are also shown in sixty other countries.

The next round of the European Ferrari Challenge takes place at Spa Francorchamps over the weekend of 15 July.

Published on XpatLoop.com with permission from the source: corseclinet.ferrari.com