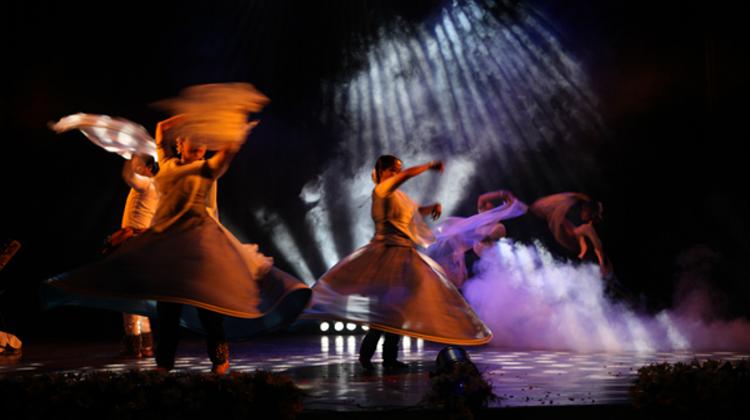 SHE- Tales of Ancient Goddesses Kathak Dance Performance of Sharmistha Mukherjee and her dance group. In Rig Veda, one of the earliest literatures in history roughly dating between 1700 to 1100 BC, there are references of several goddesses. Though none of them are central to the text, they are treated with curiosity and love for the powerful natural phenomena and abstract forces they represent.

Bringing them from periphery to the central focus, this production deals with six female deities mentioned in the Rig Veda. Each represents a force of nature; and by the interpretation of the choreographer, also aspects of human emotion and divine spirit. The performance has six parts; each dedicated to, and interpreted in contemporary terms, one goddess.

1. Aditi: She is the primordial energy, the creative force behind all creating, the mother goddess.
2. Vāc: the goddess of speech, the vehicle of knowledge, the harbinger of communication
3. Bhumi: the mother earth
4. Aranyāni: the goddess of forest
5. Rātri: the goddess of night, mysterious and powerful, containing potential for destruction only to pave way for a new creation, a new dawn
6. Ushas: the goddess of dawn, the final awakening of human spirit

“SHE” is dedicated to the mystery and the power of the feminine principle of the universe.

As a part of its European tour, ‘SHE’ will be performing in the following Hungarian venues: Summer University, Kaposvár on 17th August; Summerfest, Százhalombatta, on 18th August; Festival of Folk Art, Budapest on 19th August; Flower Festival, Debrecen on 20th August.

Organizer of the Hungarian tour: Embassy of India, Budapest in coordination with Indian Council for Cultural Relations, New Delhi.

Sharmistha Mukherjee is a highly accomplished Kathak dancer with many years of performing experience. She has received extensive training in Kathak from three of the most prominent Kathak gurus-Late Pandit Durgalal, Vidushi Uma Sharma and Shri Rajendra Gangani.

Over the years, Sharmistha has developed a unique personal style which is natural, spontaneous and full of joyous abandon. As once a critic commented: “Sharmistha is perhaps the most unpretentious and natural Kathak artist around”. Her strength lies in building an immediate rapport with the audience, even converting a totally lay audience in a foreign country, which has never been exposed to Kathak before.

Sharmistha has performed extensively in India and abroad including U.S.A., Europe, China, Nepal, Bangladesh, Middle East, Jordan and Indonesia. An empanelled artist of ICCR (Indian Council for cultural Relations). She has been sent on performance tours to South and East Africa, Madagascar, Germany, Spain, Norway and Venezuela.

In 2005, Sharmistha performed in Iceland on the occasion of Indian President Dr. Kalam’s visit there. The tour created history as it was for the first time any Indian classical dance performance took place in Iceland. Her performance was attended not only by the Indian President, but also the President and the Prime Minister of Iceland.

During the course of her tours, she has conducted a number of workshops with children and dancers from various parts of the world. Her extensive travels and interaction with prominent artists from different art forms at an international level has helped her develop an integrated approach to art and aesthetics, which is the philosophy behind her art which gets reflected in her work.

A keen choreographer, Sharmistha has created a number of compositions, experimenting with space and movements, different sounds of ankle bells, on contemporary themes, using different kinds of music, thus constantly trying to outreach the traditional boundaries of Kathak. Her choreography on the western classical music of Johann Sebastian Bach received standing ovation from the audience in Europe. Her experimental choreographies using multi-media has been highly appreciated by the critics and general audience.

Sharmistha’s creativity took a new direction when she conceptualised and directed a 6-episode Tele Serial 'Taal Mel' on dance reflecting on various components of dance which are universal. She was the Executive Producer of a film, “Children of the Pyre” made by noted director Rajesh Jala which has won many international awards. Sharmistha has recently co-directed a film on contemporary dance in India named “Beyond Tradition”. She is a regular columnist on art for The Sunday Standard Magazine of New Indian Express group.