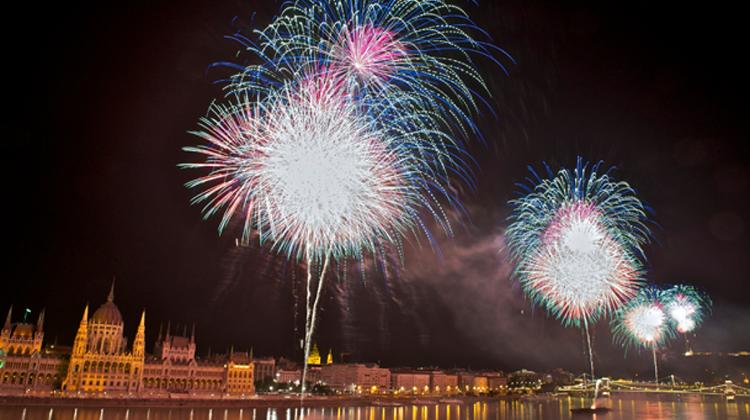 On 20 August, celebrations across Hungary have marked the national holiday in honour of the first Christian king of Hungary and the foundation of the Hungarian state. In the morning, the national flag was hoisted in front of Parliament in Budapest, in a ceremony attended by President Janos Áder, Deputy Prime Minister Zsolt Semjén and other government members, as well as diplomats, representatives of the churches and several hundred others. Read on for more official details, and a video of the fireworks.

In his speech, addressing the inauguration ceremony of young officers, President Áder said that Hungarians are at the threshold of a new era as the old one is in crisis and only nations that are able to "raise their soul" will become winners of the 21st century.

Deputy Prime Minister Zsolt Semjén pointed out that christianity and being Hungarian formed a natural untiy for Saint Stephen who was able to commit himself and the Hungarian state to Europe „without becoming a vassal” to the Byzantine and the Holy Roman Empires.

State secretary in charge of the Prime Minister's Office János Lázár attended a ceremony in his hometown Hódmezővásárhely and said that August 20 was also a holiday of the nation's survival. "Stephen implemented radical changes which enabled the nation to eliminate old ways and create its new world," he said, adding Hungary's success lay in governing the country in line with national traditions and those of Saint Stephen.

Celebrations across the country were attended by tens of thousands. The spectators could enjoy a remarkable show with military and civilian aircrafts, parachute jumpers, stunt planes and a watercraft parade on the section of the Danube. Meanwhile, the Parliament building was open to the public all day long.

In the afternoon, at Clark Ádám Square, the blessing of bread took place, a symbolic gesture to greet this year's harvest along with a harvest march.

In the Puskás Ferenc Stadium, the István Gyulai Memorial Athletics Grand Prix was held with some of the world's top athletes attending, and a reception in honour of the Hungarian Olympians.

Festivities run until the late hours, with the traditional fireworks in central Budapest starting at 9 pm.