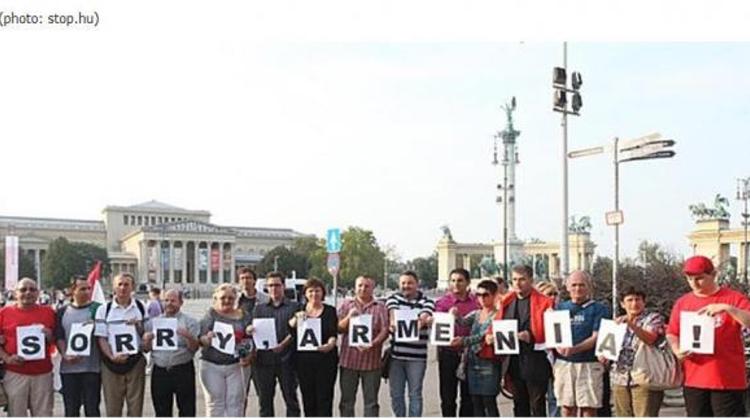 Ever since Magyar Nemzet received a facsimile of the Azeri promises concerning Ramil Safarov’s continued prison sentence, people in the opposition press kept asking why the Hungarian government was silent on the issue. If the Azeris went back on their word, why don’t the Hungarians protest and condemn the action of Azerbaijan?

Late yesterday afternoon there was a belated protest from the foreign ministry. The Azeri ambassador was told that the Hungarian government disapproves of his country’s handling of Safarov’s case because “it is contrary to the promises given to Hungary by the undersecretary of the Ministry of Justice of Azerbaijan.” But the foreign ministry’s protest was phony at best, and it is clear from the ambassador’s reaction that the Azeris didn’t take the protest very seriously either. The government of Azerbaijan had no reason to apologize. It hadn’t transgressed any international law. And Hungary had no reason to protest; the protest was merely part of a cover-up of the real story.

To my knowledge it was Péter Balázs, foreign minister in the Bajnai government, who first pointed out in an interview on ATV’s Start program this morning that the August 15 letter sent to the Hungarian Ministry of Administration and Justice didn’t include any guarantee, “and if the Hungarians saw any guarantee in this text they have problems with reading comprehension.” I assume that Balázs spoke with an edge and didn’t intend to accuse the government of either naivete or stupidity. The text of the August 15th letter was written as a result of a prior agreement between the negotiating partners. The Hungarians didn’t ask for anything more than they got.

So, let’s go back to see what was promised in the letter signed by Vilayat Zahirov, deputy minister of justice of Azerbaijan. It promised to adhere to Art.9 ¶1 of the Convention on the Transfer of Sentenced Persons of 1983. This passage states: “The competent authorities of the administering State shall: a. continue the enforcement of the sentence immediately or through a court or administrative order, under the conditions set out in Article 10, or b. convert the sentence, through a judicial or administrative procedure, into a decision of that State, thereby substituting for the sanction imposed in the sentencing State a sanction prescribed by the law of the administering State for the same offence.” But there is another article, no. 12, entitled “Pardon, amnesty, commutation.” It is brief: “Each party may grant pardon, amnesty or commutation of the sentence in accordance with its Constitution or other laws.”

In conclusion, Azerbaijan is innocent in this ugly affair. They didn’t promise not to pardon Ramil Safarov. The only guilty one is Hungary who wittingly assisted Azerbaijan in this dirty business. They had to know that the convicted murderer had become a national hero in Azerbaijan right after he committed that unspeakable murder in 2004. Surely, they also had to know that the Azeri government had no intention of keeping Safarov in jail and that more than likely he would receive a pardon from the president of Azerbaijan.

I wouldn’t be surprised if the Hungarian request of August 8 specifically mentioned that a reference to Art.9 ¶1 would do. At the very least the negotiating partners had to agree at one of their several meetings that the Azeris’ so-called guarantee would focus on Art.9 ¶1. That would be enough for a cover story. They could blithely forget about Art.12.

This morning at last Viktor Orbán said a few words about the Azeri-Armenian-Hungarian crisis that erupted on Friday. Although he didn’t look exactly calm and rested, he tried to give the impression of a man who doesn’t care what’s going on with regard to his decision to release the Azeri “national hero” or the consequences of this decision. He tried to look cool and give the impression of a man who handles “everything according to its significance.” The indication was that this affair is simply not important enough to worry about. The Armenian government’s decision to break off diplomatic relations with Hungary also didn’t seem to bother the Hungarian prime minister.

Among the opposition parties it was the Demokratikus Koalíció that formulated the clearest condemnation of the Hungarian government’s role in this crisis. It was also DK that outlined the most likely scenario. Csaba Molnár, the second in charge in DK, summarized the party’s opinion this way. “After a day of silence the government began to lie.” By dragging out the August 15th letter of the deputy minister of justice of Azerbaijan they kept claiming that “Azerbaijan conned Hungary.” But nothing of the sort happened. Viktor Orbán knowingly left a loophole for the Azeris by not insisting on guarantees concerning a possible pardon. Surely, Molnár continued, “the experienced and talented lawyers in the ministry of justice were fully aware of Art.12 of the Convention.” So, “the whole responsibility for this fiasco lies entirely with Viktor Orbán and his government.”

The deal, it seems, was struck on the strength of a promise by the Azeris that Azerbaijan would purchase 2-3 billion euros’ worth of Hungarian government bonds. The first news about this possibility appeared in Figyelő, a financial paper. On August 23 the paper reported that “a source close to the economy ministry of György Matolcsy” said that the negotiations with Azerbaijan includes the possibility of floating Hungarian government bonds in Azeri currency, the manat.

The amount received from Azerbaijan would cover the greater portion of Hungary’s sovereign debt for this year. However, István Madár, an economist working for Portfolio, has his doubts that anything will come of the deal. He was told by an expert close to the government a few months back when Hungary made a futile attempt to tap Arab funds that “you can hardly expect a country to invest in your government securities before establishing trade relations, relations between parent companies and subsidiaries and personal business experiences….. Azerbaijan eerily resembles a country with which Hungary has no meaningful trade relations.”

According to Madár, Azerbaijan can easily go back on its word unless “honor will rule over rationality in President Aliyev’s mind.” As far as the costs and benefits of the case, he continued, “there is a good chance that yet another attempt at an unorthodox way of debt financing has gone up in flames, and that Hungary’s perception worsened even further in the eyes of the country’s creditors.”

A Turkish bank has confirmed that it is in fact preparing the manat bond issuance. The only question is whether there will be a ready buyer.

After DK’s comments on the Azeri-Hungarian deal were released, Attila Mesterházy, chairman of the Hungarian Socialist Party, also spoke. He asked twelve questions from Viktor Orbán.
1. Did the question of Ramil Safarov’s release come up during the talks between the Hungarian prime minister and Ilhan Aliyev, president of Azerbaijan?
2. Does Novruz Mammadov, the foreign relations chief of the office of the Azeri president, tell the truth when he says that negotiations between Hungary and Azerbaijan have been going on for at least a year?
3. What were the new facts on the basis of which the government decided to change the opinion of the former governments about the release of Ramil Safarov?
4. Did Azerbaijan offer anything for the release of Ramil Safarov?
5. Is it true that the Azeri government offered the purchase of 2-3 billion euros’ worth of Hungarian government bonds? Is there any connection between the offering and the release of the murderer?
6. Did the Hungarian government study the reality of the Azeri guarantee that the murderer will not be pardoned after his return?
7. Did you [Viktor Orbán] receive any objections against the extradition from either the foreign ministry or from the ministry of administration?
8. Why was the government silent on the topic for 48 hours after the news broke?
9. Was the final decision yours or that of your deputy, Tibor Navracsics?
10. Did you anticipate the domestic and international scandal caused by extradition and did you think of the potential damage caused by it?
11. Did you think of the potential national security threat as a result of this decision?
12. Given the situation do you [Orbán] contemplate the dismissal of Deputy Prime Minister Tibor Navracsics and Foreign Minister János Martonyi?
Finally, Mesterházy called on Orbán to apologize to the relatives of the murdered Gurgen Margaryan.

In the past Tibor Navracsics had the reputation of being a moderate man in the the top Fidesz leadership. There was also talk about his disapproval of certain aspects of government policies as dictated by Viktor Orbán. I for one never thought that anyone who got as far as Navracsics did in the Orbán administration could offer a significantly better alternative to Orbán. And indeed. After DK released its conclusions concerning the Azeri-Hungarian deal, the ministry of administration and justice released a communique claiming that the Azeri letter was a sufficient guarantee as far as the Hungarians were concerned. After all, Azerbaijan is a member of the Council of Europe.

This story will go on and on.