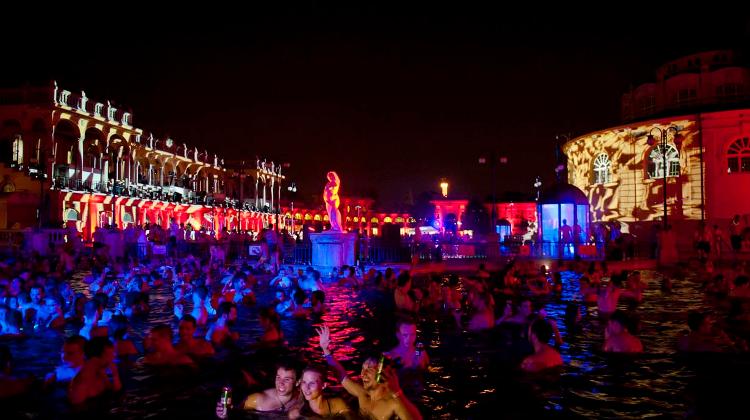 The world-famous bath sparty has reached its 15th anniversary, and as a lucky consequence, they're holding a 'non-traditional fire-water' Sparty on the last Saturday of December. Having entertained over 100.000 visitors throughout the years, Cinetrip will shed a different light on the spectacular and healing properties of Széchenyi Bath in Budapest.

During its long and colourful history, the sparty series has brought many unforgettable memories in various baths and formats. From the early times, when famous DJ's from around the world received a movie title and the surprising task prior to their performance requesting them to reconceptualise their soundtrack live during the party, up till the summertime water parades deploying the latest visual technologies.

In addition to the DJ's of international fame, local musicians also played and important role, at times in 4 rooms in 4 different styles. At the time of Cinetrip's birth, the deeper underground genres of electronic music were not really represented in Budapest night life, nowadays, however, various organizer teams, DJ formations are pumping the bass all over town. On the occasion of its 15th anniversary, local resident DJ's from its whole history will be lining up: almost 10 during the five hours of the sparty.

The so called "musical relics" of Budapest spas will be in charge of the audio domain, who always fully attune their soundwaves flowing from the given format to the spirit of space. In the name of eclecticism, you will hear generation-gap-bridging Palotai, Titusz of Bëlgian fame, telepathic Superman; house, its ancestors and successors will be covered by Waxman, Marvin and Crimson, and the representatives of pure electronica will be Naga, Kevin and Kaszi.

The experience will be made complete by the steaming open-air theme pools and the performances around them. If you manage to survive the end of the world, you should not miss it!

Flip-flops almost a must, and of course, don't forget your towel.

Tickets
In advance: 10.000 HUF - available at Hütte Café (in the middle of Szabadság square), Mozaik Teahouse and Café (Király u. 18.), Szimpla (Kazinczy u. 14.)
At the door: 10.000 HUF
Artists: Palotai,Titusz,Superman,Waxman,Marvin,Crimson,Kevin,Naga,Kaszi

How to Get There: by trolley bus No.72 or by the millenium underground (No.1.) to Széchenyi Bath stop.