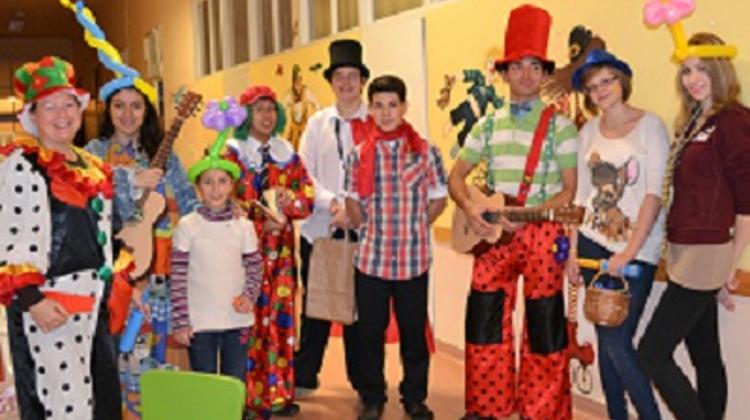 Bronze Award participants at the Britannica School in Budapest go above and beyond the requirements of the Service section to bring joy to disdvantaged children at Christmas. Award Leader Stephen Colliver and his group of ten Bronze Award participants are only a few months into their first Award experiences, but they have already immersed themselves in activities including learning piano, railway model making, cake baking and languages for the Skill section, and cross-fit, tennis, swimming and athletics for the Physical Activity. But it is through their Service section that they are really making an impact.

Bronze Award participants clowning around in a hospital in HungaryTeaming up with a Hungarian non-governmental organisation called Love is the Answer, some students volunteer weekly at the children's ward of a local hospital in Budapest, dressing up as clowns, singing songs, telling jokes, doing magic tricks and making balloon animals. A second group visits a local orphanage playing games and teaching crafts to young children.

At Christmas the whole group of Award participants got together to run an appeal to bring some joy to young children from impoverished families in the north of Hungary. Having made stars with the names of almost 400 children on them and hung them on a Christmas tree at the front of the school, they encouraged parents to collect a star and return it with a gift attached as well as food and clothing donations. The students also organised fundraising events including a bake sale and non-uniform day, the proceeds from which were used to buy food for the disadvantaged children.

Just before Christmas, the Bronze Award students loaded all the gifts, food and clothing onto a truck and went to the remote villages to give in person the goods they had collected, ensuring that every child received a wrapped present for Christmas. Stephen Colliver, the participants' Award Leader, said it was an extremely rewarding experience to bring a smile to so many young faces and is pleased that many of his participants have chosen to volunteer further, choosing to do their Service section for six months as their longest section.

With thanks to Stephen Colliver for the initial information and photographs.