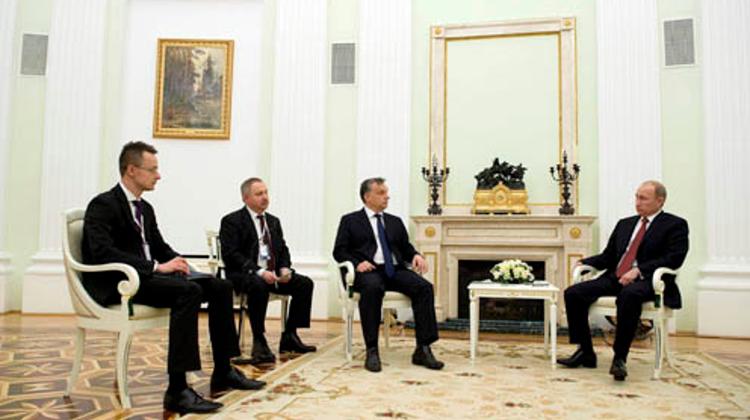 It is in Hungary's fundamental interest to pursue good relations and close cooperation with Russia, Prime Minister Viktor Orbán said when he met President Vladimir Putin in Moscow on Thursday. The Prime Minister stressed Russia’s importance and apart from its economic power, he also praised the richness of Russian culture. He pointed out that Hungary has always regarded Russia as a great nation with a great future.

Hungary therefore would like to encourage Russian investments as well as maintain bilateral cooperation on energy, and it relies on Russia’s “excellent professional credentials and world-ranking technology.” Viktor Orbán expressed his hope that Hungary will also be able to increase its exports to Russia.

Hungary is unquestionably Russia’s priority partner in the Eastern European region, Vladimir Putin said, adding that bilateral relations are developing in a promising manner. According to the President, Russia is Hungary’s second most important trading partner after Germany: trade between the two countries amounted to 11 billion dollars in 2011. He also mentioned that over the past three years the volume of joint investments has eased, and so there is room for further cooperation in this field.

President Putin noted that Russia plays a leading role in supplying crude oil, natural gas and electricity to Hungary; and it also supplies nuclear heating materials for Hungary’s sole nuclear plant in Paks. He also said Russian companies are ready to participate in Hungarian energy projects, such as renovating power plants and building new ones.

Putin was thankful to Hungary because it supported the construction of the South Stream gas pipeline project, the realisation of which will mean investments worth EUR 610 million to the Hungarian economy. In addition, transit fees will generate further revenues and gas supplies will improve as well.

The brief statements were followed by a plenary discussion in the Kremlin.