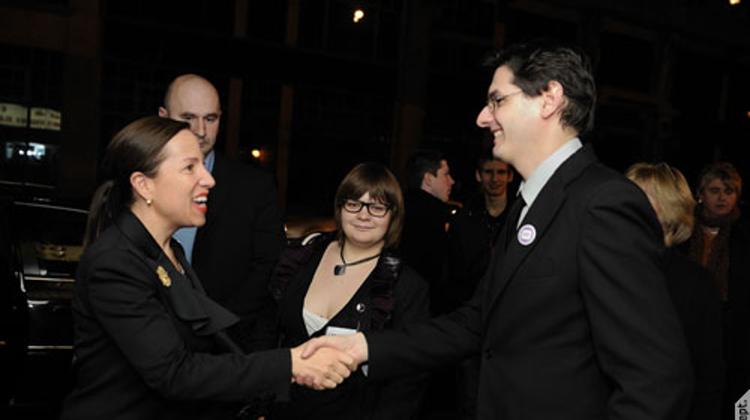 Remarks by Ambassador Eleni Tsakopoulos Kounalakis at the launch of LGBT History Month in Hungary on February 1.

Thank you, Klara [Spilak] for the introduction, and I’d like to thank the Labrisz and Hatter organizations for the invitation to say a few words this evening.

Hungary, along with seven other EU nations, including the United Kingdom and Ireland, has declared February to be LGBT History Month. Over these 28 days, many activities have been planned: Film nights, discussion panels, lectures and parties. Many of the subjects are serious and reflective – and then there are others that help recognize the important contributions to culture – such as Mark Lakatos and his fashion presentation.

For our contribution, the U.S. Embassy is proudly supporting the visit to Hungary of Senator Katherine Zappone. Katherine Zappone is a member of the Irish Senate, but she was born and raised in the United States. Love took Senator Zappone to Ireland, and she became an Irish citizen after she met and married her partner Dr. Ann Louise Gilligan, a noted human rights advocate. Two years ago, Katherine Zappone was appointed Senator by the Irish Prime Minister and later this month, she will be in Budapest to participate in a panel to talk about her experiences growing up gay in America.

As has been mentioned, I walked with pride among you last June as the first U.S. Ambassador to Hungary to march in the Budapest Pride parade. As I said then, the Obama Administration has taken considerable steps in recognizing LGBT rights, including repealing the U.S. military policy of “Don’t Ask, Don’t Tell,” and speaking out in support of same-sex marriage.

I had the opportunity to be present just two weeks ago, when the President delivered his second Inaugural Speech on January 21.st President Obama made history as the first president to use the word “gay” in his remarks, in reference to the LGBT communities and marriage equality. The President proclaimed that America’s “journey is not complete until our gay brothers and sisters are treated like anyone else under the law – for if we are truly created equal, then surely the love we commit to one another must be equal as well.”

Of course, Secretary of State Hillary Clinton has always noted that: “The story of America is the story of people coming together to tear down barriers, stand up for rights and insist on equality, not only for themselves but for all people.” Although Secretary Clinton’s last day in office is today – I have every confidence that her successor, Secretary-Designate John Kerry, will continue to find new ways to advance basic human rights for the LGBT community.

Part of your discussions this month, I am sure, will include not only an overview of your history in Hungary – but also a look ahead to identify the very real challenges that LGBT people around the world face. The United States and Hungary have made strides in preserving universal human rights, but more hurdles must be overcome. I admire the courage and perseverance of the Hungarian LGBT community against adversity and I stand with you all on this journey to raise awareness of the value of diversity and the acceptance of LGBT rights as human rights.

Once again, I thank you for this opportunity to address you this evening, and I wish you a fulfilling, instructive and enjoyable LGBT History Month.