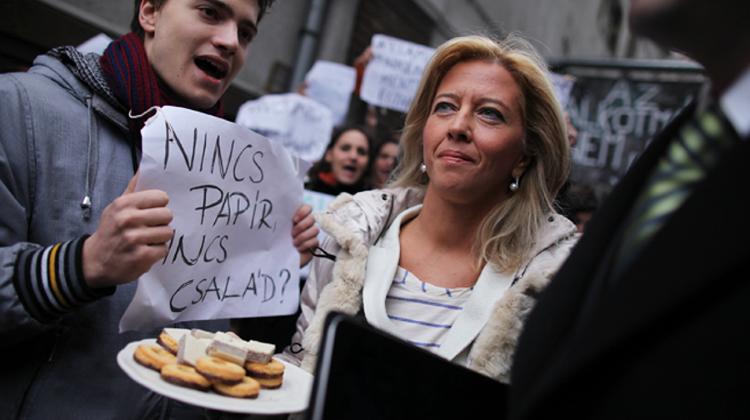 A pro-government columnist accuses opposition protesters of provocation and radicalism. A left-wing pundit, on the other hand, fears that the government is about to create a volunteer army of its supporters and steer the country to the brink of civil war.

On Thursday afternoon, a group of mostly young demonstrators climbed over the fence of the Fidesz party headquarters in Budapest in protest against the constitutional amendments to be voted by Parliament on Monday (see BudaPost March 9). Fidesz politicians called the police, but did not ask them to force the protesters out of the headquarters’ garden. The only demonstrator who was taken away had kicked in the door of the building.

Fidesz spokesperson Gabriella Selmeczi and communications chief Máté Kocsis MP offered the shouting demonstrators cookies, and told them that they would have invited them onto the Fidesz premises, had they been asked. Later, Fidesz supporters gathered around the building, protected the gates and later locked the protesters in the garden. Some of the volunteers who came to protect the Fidesz premises were well-known fans of the Ferencváros Football Club.

One of them, who is currently employed by the Ferencváros FC, was allegedly convicted of murder eighteen years ago and served a 10 year prison sentence. Fidesz politicians linked the demonstrators to former PM Gordon Bajnai and his Together 2014 party. The protesters denied that they had any ties to political parties.

The left-wing opposition is provoking the government in order to gain publicity by posing as martyrs, Szabolcs Szerető comments in Magyar Nemzet. Szerető likens the Hungarian opposition to their Russian counterparts, who stage actions against Russian President Vladimir Putin in order to provoke violence and get into the CNN headline news. This time, however, the Hungarian anti-government protesters have not succeeded, since Hungary has become a free country where the right to free assembly has been guaranteed for all, and, in contrast with the 2006 events, brutal police force is not being used against protesters, Szerető notes.

He suggests that the occupation of the Fidesz headquarters and the foreign criticism of the fourth round of constitutional amendments are orchestrated by the left-wing opposition parties. Szerető notes that all this foreshadows the 2014 elections, and that the country can expect what he terms a bitter and disgusting anti-government campaign by the frustrated and desperate opposition parties, which lag behind Fidesz in the polls (see BudaPost March 7).

Those in power should stop provocations, otherwise the country will soon approach the brink of civil war, Róbert Friss writes in Népszabadság. The left-wing columnist believes that Fidesz is setting up its own volunteer guard. On Saturday, Klubrádió reported that Gábor Kubatov, Fidesz party chief of staff and President of Ferencváros FC is recruiting volunteers who could be deployed within an hour to protect Fidesz party offices. Friss contends that by setting up such ‘shock troops,’ similar to the paramilitary Hungarian Guard allied to Jobbik, the government is challenging the State’s monopoly on force.