Xpat Opinion: The War Around Utility Tariffs In Hungary 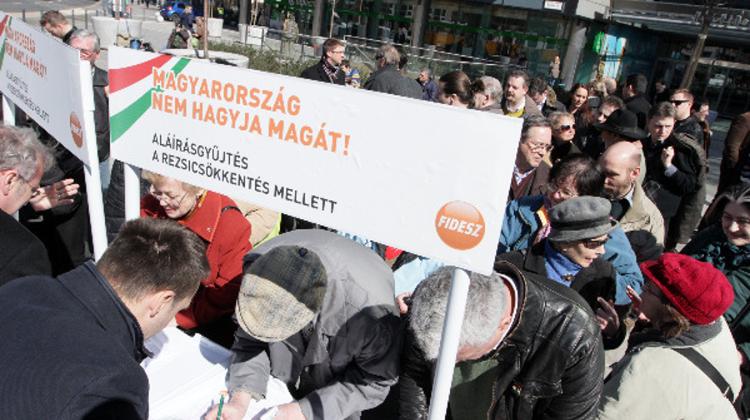 The planned legislation on a 10% reduction in all utility prices for households is described as a popular but risky move by business analysts, while partisan commentators criticise or praise it according to their political affiliations.

In his regular biweekly Friday morning radio interview, Prime Minister Viktor Orbán announced this week he would cut utility prices “by force if need be.” Fidesz also began a campaign to collect signatures in support of this policy which, they claim, is under attack from international utility companies and other foreign interest groups. The party regards this as part of a concerted assault on Hungary, which started in the wake of the Fourth Amendment (see BudaPost March 9th and 18th). MSZP, the largest opposition party reacted with a street campaign to collect signatures to demand the reduction of VAT (currently 27% across the board) on foodstuffs and other basic commodities.

In a long article examining the role of energy prices in Hungarian politics on Portfolio.hu, a financial news site, Gábor Patkó points out that gas consumption is strikingly high in Hungarian households, with four fifths of homes connected, and gas prices are usually a popular item on the campaign agenda. Although the gas unit price is not particularly high in Hungary as compared with the EU average, the purchasing parity statistics show a different picture. Many households are at the end of their tether, and must increasingly cut back on consumption or chose other ways of heating (mainly burning wood).

Since Hungary has to import two thirds of its energy carriers, which puts companies at the mercy of the world market, it is clear that “governments have an obligation to pay attention” to utility prices. However, while reducing utility costs is a logical choice for a government looking for more popular support without spending public resources, the long term solution is better insulation, alternative heating solutions and targeted social support, Portfolio warns. Price control simply spreads the costs among utility companies and non-household consumers who are hard-pressed anyway, and therefore amounts to what the analyst calls (borrowing a phrase from the government campaign), “political profiteering”.

The left-wing business blog, Napi.hu, also warns that lower utility prices might end up as a costly experiment. After the mid-March snow storm, tens of thousands of people were left without electricity and in some areas supply could not be restored for several days after the storm. Yet the government is about to ’bleed utility companies white’, with the inevitable result that resources for maintenance and reliable service will be scarce, Napi contends. If providers are to be left with lower margins, they will have to cut back on personnel and maintenance costs.

Thus, the analyst continues, price fixing in the long term will be equally painful for the state, consumers and utility companies alike. The nationalisation of energy providers, an idea the government mentions time and again, will not help: customers would simply put the blame for bad service on the state, as a result. “Do we really want that to happen?” – Napi asks.

In Népszava Tamás Bihari finds it unclear if cuts in utility costs would help the retail market, because no feasibility studies are available. The government consistently fails in its attempts at fostering demand, “and consumption levels seem to spiral into a freefall.” In fact, the commentator argues, after last year’s 2 per cent dip, the very best prognosis is stagnating retail demand for 2013. The “trump card of the flat income tax” introduced in 2010 did not help consumption, the author claims, and neither will the regulation of utility prices: people use these resources as stop-gap measures, reducing their debts.

Quoting a report of the market research company Gfk Hungária, the analyst says consumption is about trust, and there is a “consumers’ trust deficit” in Hungary. People prioritise according to price even when it comes to food or other basic daily items, so Bihari thinks Mihály Varga, the newly appointed Minister of the Economy, who once ”expected an upturn from a return of consumers to the market after years of postponing consumption,“ is bound to be disappointed.

Magyar Nemzet columnist Gábor Stier takes a similar perspective, but draws very different conclusions from the same premises. He says people are interested in living costs not the Fourth Amendment (see BudaPost March 9th) – the latter is only kept on the political agenda by the opposition. As the left “cannot promise a better life, because that would be a hard sell after their eight years in power,” he continues, they start attacking the government abroad, manipulating foreign public opinion with “the bogeyman of a sly dictatorship” and anti-Semitism.

The author admits that Hungary “is not perfect and things could be run better.” For instance, he finds it difficult to understand why the constitution had to be amended four times, and racism is a serious problem, he adds. But he deems it utterly unfair to claim Hungary “is on the way towards Nazi type massacres,” by weakening the rule of law, as Paul Shapiro, director of the American Holocaust Memorial Museum claimed at a Helsinki Commission hearing on Capitol Hill. “He must have been misinformed,” the journalist concludes.

In any case, the United States administration “is not in a position to tell off Hungary for her alleged democratic deficit,” as, he says, the Republican Christopher Smith emphasized after the same Helsinki Commission hearing. The EU, too, had better put self-righteousness aside after its Cyprus intervention. Hungary is entitled to more patience and empathy, Stier concludes, while she admittedly needs to make herself better understood amongst her allies.