Have Your Heart Set On New York With Jet2.com 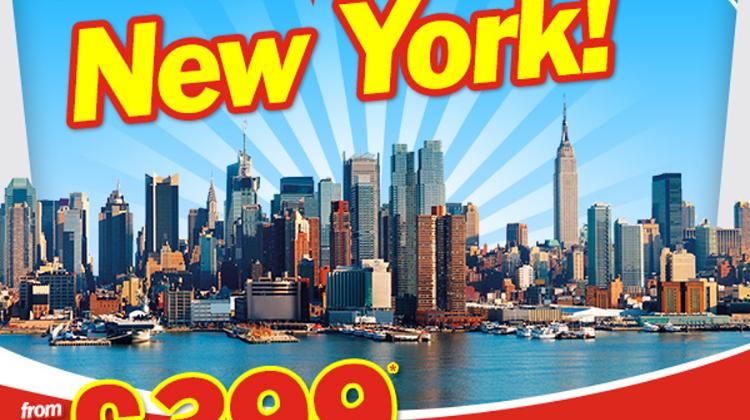 You'll be wide-eyed with wonder when you fly to the city that never sleeps – New York! And like all the best sequels, this year we're back and bigger than ever to bring you our largest choice of flights over four weekends in November and December. Get set to shop like you've never shopped before in huge department stores, see towering skyscrapers and just enjoy the festive atmosphere of this mighty fine city.

Stepping out in New York is like stepping onto your very own film set. And it’s the Statue of Liberty that takes the starring role. An iconic emblem of the United States, the famous mint green statue holding a torch with glistening gold flames dominates Upper New York Bay. You can even stand at the very foot of the statue after taking the scenic boat ride to Liberty Island.

Although when you wander the glitzy streets of Manhattan you’ll soon recognise that everything in New York is played out on a grand scale. Look up and admire the Art Deco styling of the Chrysler Building and the Empire State Building, both created with clean, straight lines, marble adorned interiors and perfectly symmetrical patterns. From below, the Empire State Building’s rows of glistening black windows seem endless, but from above, you’ll see the endless tiered towers of the city in all its 3D depth.

In fact, New York seems to specialise in great views, as you’ll note at the Top of the Rock Observation Deck at the Rockefeller Centre. It stretches right the way round its 70th floor, giving you a unique 360° panoramic – a sight that’s especially alluring at night when the skyscraper windows shimmer like stars in the darkness.

But even if you haven’t got a head for heights, sights like the Brooklyn Bridge give you plenty of picture perfect scenes. You can choose to walk or drive across this great suspension bridge that has featured in films as diverse as Godzilla, I Am Legend and of course, Gangs of New York! However, we’d really recommend walking so you can really get up close to the web-like criss-crossed cables that make up the bridge’s suspension.

Your sense of wonder also continues indoors at the city’s many galleries and museums. The Metropolitan Museum of Art has a simply staggering 2 million works, spanning from ancient Egyptian figurines to the paint splatters of Jackson Pollock.

After endless exciting scenes in New York, you should make sure you visit Central Park before the credits roll. This 850-acre park is the evergreen heart of the city amidst the glass and metal of Manhattan. Peaceful pathway strolls here take in bottle-green lakes, storybook castles and the famous gleaming bronze Alice in Wonderland sculpture. It’s a beautiful end to your own story of the city too.