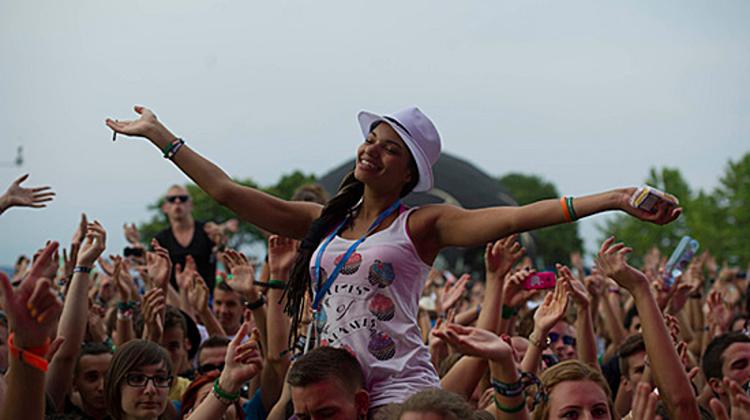 If you are interested in seeing a killer opening day for a festival you don’t have to go any farther than Zamárdi! Just one look at the line-up makes it obvious why MasterCard Balaton Sound became one of Europe’s most popular festivals. International stars such as Wu-Tang Clan, Crystal Castles, Justice, Baskerville or the Bloody Beetroots as well as the most popular Hungarian bands will be celebrating the grand opening of the festival.

Taking the Main Stage first will be the Canadian electro-duo of producer Ethan Kath and singer Alice Glass, Crystal Castles. They perform their powerful lo-fi songs in a chaotic and sentimental manner. With their third album released 6 months ago the band has a repertoire that is perfect for setting the mood for the upcoming days.

Wu-Tang Clan is bringing you one of the most anticipated festival tours this summer and finally the entire crew will be performing in Hungary. The originally ten-piece band (that is only a nine-piece since the death of Ol’ Dirty Bastard) is a real institution of American hip-hop.

While the west coast was ruled by G-Funk, the east coast started its own offensive led by Wu-Tang with at least as much success as the others. The band officially formed in the early 90s and released its debut record, Enter the Wu-Tang (36 Chambers) – a milestone among debut records – exactly 20 years ago, so we can take part in a reminiscence of a lifetime at the Zamárdi beach.

Closing the programme of the main stage from half past nine is Avicii with his electronic set. The Swedish titan appeared on the scene four years ago and he immediately became a headliner of the biggest festival. His first own songwriter album, True will be released in September so his show will probably feature some never before heard jewels along with his biggest hits.

Hitting the decks at 9 o’clock in the Arena is the lord of Budapest-break, Metha. Following him is Gábor Jónás, aka Stereo Killaz who started off around the same time as Metha did about 10 years ago. Next up is Sikztah who started his career as a hip-hop DJ and MC back in the early 90s before diving into the world of electronic music as a producer and remixer only later.

Starting from 1 o’clock is on of the most anticipated performances of the night, the DJ set by French artists Justice. Songs like D.A.N.C.E. or Phantom prove that they are for sure among the elite of French electro artists such as Daft Punk. Following them is another Frenchman, Brodinski starting at 3 o’clock. Since his start five years ago the admittedly bass-sensitive artist became well known among electro lovers, started his own label and we are sure we will hear some brand new stuff from him in his set. Closing the night is Andro starting from 5 o’clock, easing our transition into the next day.

Opening the night at the Telekom Terrace is the dark, atmospheric-melancholic synth new-wave of Volkova Sisters. Next up is the Norwegian genius Todd Terje who is hard to categorise. This eccentric, unpredictable electronic artist mixes everything that has a strong effect on all senses and turns every dance floor into a pure disco orgy. Continuing the madness at ten are two major figures of the Budapest club scene, Naga & Beta. They conquered every stage they’ve played in the last two decades and so they will in Zamárdi this year. From midnight Scuba will hit the stage followed by the house set of the German Solomun from 2 o’clock and the techno set from Secret Factory starting at half past four.

The warm-up on the OTP Bank Stage celebrated by Syrup will start from 1 o’clock. From 4 o’clock Ganxsta Zolee és a Kartel will prove that they still party as hard as they used to. The hip-hop Buddhists of Akkezdet Phiai will squeeze some street poetry into the festival line-up. Pumping our adrenalin high from 7 o’clock is the live act of Dutch Baskerville with their music from drum and bass, through break beat to techno. Presenting their sexy and energetic new record is Irie Maffia from 9 o’clock. Spicing up the mood from 11 o’clock are the Italian Bloody Beetroots followed by Dublic and by another Italian artist Belzebass.

The Sziget Lounge won’t be all chill out throughout the day. DJ sets from Zoohacker, Rony Breaker and Zagar will make sure to keep your blood pumping.