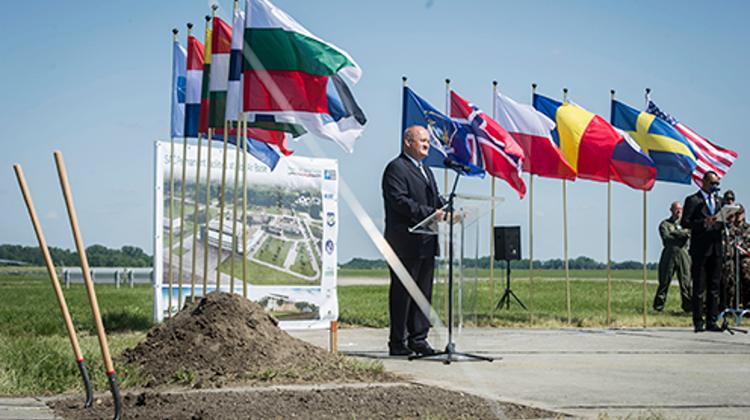 The Secretary General noted that the Heavy Airlift Wing had been operating at the air base since 2009, conducting strategic airlifts for the 12 members of the Strategic Airlift Capability (SAC) consortium. SAC comprises ten NATO members (Bulgaria, Estonia, Hungary, Lithuania, Netherlands, Norway, Poland, Romania, Slovenia, United States,) and two members of the Partnership for Peace program (Finland and Sweden). Since 2009 the strategic planes have carried 30 tonnes of cargo and 30,000 passengers, he added.

Speaking at the press conference following the event, the Secretary General called the SAC programme operating at the Papa base "exemplary". Its C17 aircraft have covered long distances on repeated missions between Hungary and Afghanistan, providing basic airlift for troops, just as they have served on other long-distance missions to Haiti, carrying aid to victims of the earthquake, he stated.

He emphasised that the SAC demonstrated a country's abilities were not linked to its size, and it also shows that smart and cooperative work is of the essence. He noted that ten NATO countries and two partner states fly missions together, sharing the costs and maintenance duties. This is the very point of NATO's Smart Defence, the Secretary General pointed out, adding his thanks for Hungary for hosting the programme.

Minister Hende announced in October 2012 that the Government agreed with NATO on upgrading the Pápa base into a logistics hub suitable for receiving both civilian and military freight aircraft. He told the press conference that to make up for failures of the past 20 years the Ministry's main objective now is to strengthen Hungary's military capabilities on offer to NATO.

After the ceremony, the two parties consulted on developing strategic airlift capabilities as well as other projects at the base. The Secretary General, who arrived in Hungary for a one-day visit at the minister's invitation, is scheduled to meet President János Áder and Prime Minister Viktor Orbán.