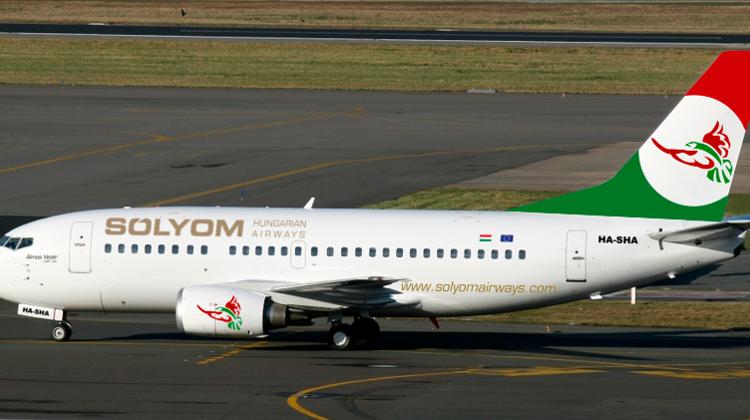 Here's an overview of how Sólyom Hungarian Airways came into existence, its current situation as well as future plans. Also included below is info about its owners, strategic investors, and a few interesting stats such as, "Route network: 31 destinations in 2013, 51 destinations in 2014, and 96 destinations in 55 countries around the world by 2017". Oh and as you probably know, Sólyom is best pronounced 'shoiom', more on that below too.

"Over the past year and a half, we were pondering what could best express how much this undertaking means to us emotionally, the intent we had and the purpose we wish to achieve by founding this new Hungarian airline. It was very important for us to choose an emblem which is closely associated with Hungary in people’s minds and also considered a well-known and respected symbol both by future passengers internationally and our business partners as well as investors.

Eventually, we settled on the hawk (falcon) because it is one of the most well-known and respected symbols in Hungarian history, having accompanied the history of the Hungarians, and having an important mythological role on many religious objects and in numerous depictions.

The hawk is the link between the Skies and the Earth. It embodies strenght, courage, agility, endurance, respect and protection.

Earlier doubts about possible pronunciation problems with the name of the new Hungarian airline dissolved completely when we saw that after hearing the word only a few times, each one of our business partners from America to India could learn how to pronounce “SÓLYOM” perfectly. We are confident that before long the whole world will learn how to say this beautiful Hungarian word as our passengers spread our fame.

For us, SÓLYOM also symbolizes a passion to adopt and promote basic social, community and religious values and to conduct ourselves in a way which helps build and shape communities.

The SÓLYOM Group considers it an important mission to actively contribute to the rise of Hungary and to promote Hungary’s international acceptance and recognition. In this context, we want to become one of Hungary’s leading employers. In the next four years, we are going to offer jobs to 5,000 Hungarian fellow citizens directly while providing livelihood opportunities for an additional 20,000 people through our suppliers.

We prefer Hungarian domestic producers and suppliers in the process of selecting our partners. Our invitation to tender will be published on our website and in leading daily newspapers on August 1, 2013.

What's the background to the founding of SÓLYOM Hungarian Airways?

Preparations for the establishment of a new Hungarian airline started when an e-mail was sent to a potential investor on February 6, 2012. Since then, we have conducted serious negotiations with several investors and leading international airlines to partner with them.

We have always kept the Ministry of National Development posted concerning our plans. The only exception to the rule was our current investor with whom we had managed to make an agreement on the establishment of SÓLYOM Hungarian Airways and its financing before we informed the government agency.

Who are the owners of SÓLYOM?

SÓLYOM Hungarian Airways Ltd. is a flagship of SÓLYOM INTERNATIONAL GROUP, which is in the process of being formed. Within the SÓLYOM Group, discretionary functions are performed by SÓLYOM Investment and Asset Management Holding Ltd., which in turn is wholly owned by three Hungarian natural persons: Mr. József Vágó, Mr. Róbert Hurtyák and Mr. János Lucsik. The owners of SÓLYOM Investment and Asset Management Holding Ltd. have entrusted the management of the company to Mr. Lucsik.

According to the above, at this point SÓLYOM Hungarian Airways Ltd. is exclusively owned by SÓLYOM Investment and Asset Management Holding Ltd. which is where a strategic investor may become a minority owner by purchasing shares.

The structure of the Group is completely transparent, with no off-shore interests. For tax purposes, each company in the Group and their employees are subject to taxes in Hungary.

Who are the strategic investors behind SÓLYOM?

• A tourism enterprise registered in Muscat, the capital of the Sultanate of Oman is a minority owner in the airline.

Our investors have accepted relevant EU rules on ownership and effective control as laid down in Regulation (EC) No 1008/2008 of the European Parliament and of the Council on common rules for the operation of air services in the community. Accordingly, in the operation of the airline (both in terms of ownership structure and actual management functions) Hungarian (EU) participation will always be predominant.

What are the future plans for SÓLYOM?

We have an approved Business and Financial Plan for the period 2013-2017. Below are some of its more important parts:

What reasons can you give for the success of SÓLYOM?

• The airline is privately owned. Decision-making is fast, never slowed down by bureaucratic discretionary procedures.
• The State does not participate in the airline as an owner.
• In spite of what competitors have been spreading in the media, after the bankruptcy of MALÉV there is still significant market potential, and many passengers have been forced to use other air carriers for lack of other options.
• As a network airline, we can contribute to boosting conference tourism in Budapest and filling the vacuum in the charter market.
• SÓLYOM Hungarian Airways is currently the only airline in Hungary which is competent and able to operate as a national airline. This is made possible through Hungarian majority ownership, Hungarian management, our Hungarian seat and staff as well as paying taxes in Hungary.
• Our investors provide the financial resources needed to start the airline, making sure that a lack of resources cannot hinder the development of the company.
• The SÓLYOM Group has the ability to create jobs, generate revenues from tourism and exports which make it a market actor stimulating national economy, increasing Hungarian purchasing power and people’s enthusiasm for travelling.
• There is huge public demand for premium services if an airline can provide such services.
• When SÓLYOM appears on the market, prices will drop and it will be air passengers who can benefit from that.
• Most routes outside the EU, operated under bilateral agreements, are underused.

Most of the route rights allocated in the recent period will be available again soon.

Finally, let us summarize the current status of SÓLYOM Hungarian Airways. Budapest Airport has provided the space for our first company offices. Furthermore, we have received permission to register our company seat at Budapest Liszt Ferenc International Airport. Our scope of business has been amended in our company documents, and now officially our main activity is passenger transportation services by air.

In a timely manner, we submitted all applications for permits and licenses we are required to obtain to operate under the law, and we can fully meet the necessary conditions so authorities are in a position to be able to process our applications without any delay or problems. Accordingly, none of said applications has been rejected by any authority so far.

Our online ticket sale system will be available soon. We have managed to sign strategic agreements with leasing companies, so the hand-over procedure for the first six Boeing 737-500 aircraft will soon begin.

We are going to start recruiting new staff as of August 1, 2013. We will publish selection criteria and specific job descriptions on our website and in leading daily newspapers.

The Hungarian Conquest is just beginning as you read this. The registration mark on the first airplane is HA-SHA with style. We named it after the Grand Prince of the Magyars Álmos, who was the first head of the Hungarian tribes. Others will follow very soon.