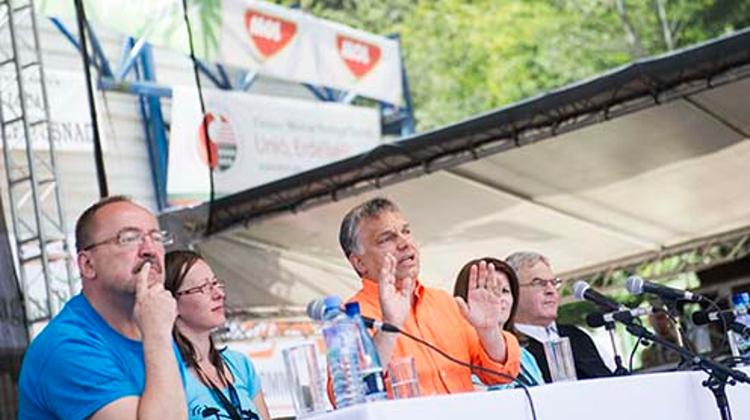 Both left and right-wing commentators missed Romanian politicians at this year’s Fidesz summer university at Tusnádfürdő. A left-wing columnist, however, accuses PM Orbán of trans-border vote hunting while his pro-government counterparts believe that the electoral impact of the Hungarian diaspora will be miniscule.

In his speech at the annual Fidesz summer university at Tusnádfürdő (Băile Tuşnad) in Transylvania, PM Viktor Orbán said that nation states are gaining importance in the current global transition process. He described his government’s decision to repay its IMF loan (see BudaPost July 17) by the end of the summer as an act which bolsters Hungary’s sovereignty, alongside other recent measures intended to support Hungarian entrepreneurs. In a brief aside, he noted that trans-border Hungarians will have the opportunity to influence the outcome of the 2014 election.

The Tusnádfürdő summer course is losing its attractiveness, Levente Szőcs comments in Népszabadság. The left-wing commentator believes that the once popular event with lively disputes between prominent personalities from Hungary and Romania is becoming dominated by the Hungarian right wing with no room for a meaningful dialogue.

The summer university is becoming more like any other summer festival, where the concerts are the main events. Szőcs also remarks that the Hungarian public media has reported int the event rather intensively, which the author considers as a clear sign that Orbán has started campaigning for the votes of trans-border Hungarians.

In Magyar Nemzet, István Pataky also finds it disappointing that no Romanian politicians attended the summer university, and thus no debates between the Romanian majority and the Hungarians could take place. Like his left-wing counterpart, Pataky regrets that the event is increasingly dominated by the same elites and that some of the lectures are of low intellectual quality.

As for the real electoral weight of the trans-border constituency, the pro-government pundit suggests that the votes of Hungarians living in neighbouring countries will most likely have only a symbolic effect, and so their participation in the election will strengthen national cohesion rather than determining the outcome of the vote.

It is no surprise that left-wing liberals read PM Orbán’s lecture as a campaign address, Péter Szentmihályi Szabó writes in Magyar Hírlap. The most important message of the speech, however, was that small nations with far-flung diasporas like Hungary need to show unity in order to defend national interest against “imperial centres”, Szentmihályi Szabó contends.