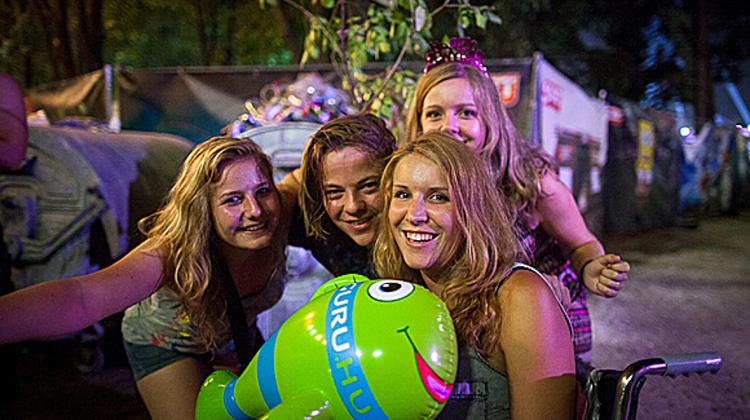 On Friday Sziget will bring legends, big comebacks and some of the freshest new acts around on every stage, once again. To help you find your way among the names and stages here’s our recommender for Friday!

British band Mystery Jets brought pumped some new blood into the indie guitar-pop scene by mixing up the style with some American influences on their latest record. A group recorded their fourth album, Radlands in Texas, the home of the rangers and rednecks, so the songs have a nice retro-country touch to them.

We hope though that they will smuggle some of their older hits into the setlist, like Young Love that they’ve recorded with Laura Marling or Two Doors Down that evokes the sound of the 80s. Compared to the next act Mystery Jets is still just at the start of experimenting with some styles. The dance punk group !!! (Chk Chk Chk) plays everything from funk and disco to rock. They’ve already tested the songs from their new record Thr!!!er in Hungary this year. Singer Nic Offer proved on the A38 boat that he is quite the showman. !!! is becoming the new synonym of a crazy party. A must see!!!

Next up is Seeed from Berlin at 7.30 pm. The 11-piece dancehall group let the fans wait for six years before they’ve released their latest, self titled album. But it was worth the wait. The record opened at the top of the German charts. You might want to warm up before this one! Headlining the Main Stage on Friday is Blur – this is a sentence that a lot of people wanted say for a long time now. The band went into early retirement in 2003 putting a pause to the endless battle for the throne of Britpop with Oasis.

After the big comeback in 2009 the band released new songs, got a lifetime achievement award at the Brit Awards and went on a world tour this year that brings them to Hungary finally. Dear faithful Oasis fans, you can admit now that ever since you heard Song 2 for the first time you just want to party to the music of the arch enemy. See you at 9.30 on Friday! Whoohoo!
Source: Sziget Festival

The OTP Bank World Music Main Stage opens with the flashmob of Appril Project at 4.30. If you would like to dance against corruption join the programme of Transparency International! You shouldn’t miss the performance of Ukrainian DakhaBrakha at 5 pm. The quartet of four that is coming from the avant-garde theatre scene is mixing all sorts of folk music with their own traditions and some electronics into one creepy-crawly potpourry.

After that comes a quite big change. Let’s be honest, rap isn’t really what you would expect at the world music stage. Shutka Roma Rap is lifting the art of rhyming into new spheres backed by Balkan folk music a provocative roma-funk at 5 pm. Coming from Tucson, Arizona Calexico is opening the borders between the US and Mexico with their mix of South-American mariachi and American rock and country.

The duo has recorded its latest record, Algiers in New Orleans so the sounds of the Mississippi delta will be melting into their usual tex-mex melodies, spicing up the dusty desert world of Joey Burns and John Convertino. The stage will turn into one big wedding party at 9.30 pm. A regular guest at the stage, Emir Kusturica & The No Smoking Orchestra is absolutely mandatory for everybody. The Balkan whirlwind of Kusturica will heal your heart and your soul and make you want to shake your hips.

Monophona from Luxembourg will be presenting their new album, The Spy at the Party Arena at 4 pm. After the sweet and gloomy electronics of the trio the crowd at the Arena can get crazy to the sexy dubstep-electro mixes of Left Boy from Austria. We’ll stay on German speaking territory after that with the stars, who grew out of the Frankfurt underground scene, Booka Shade at 7.30 pm. Next up Stereo Palma at 10 pm followed by Muzzaik at 11.30 pm. Representing the elite of Swedish house is Sebastian Ingrosso, member of the late Swedish House Maffia at 1 am. Following the Swedish star is Otto Knows, an artist from his own label Refune Records. After that Julia Carpenter will be closing the night at the Arena.

Forming the core of Skip&Die is Cata.Pirata from South-Africa and Jori Collignon form the Netherlands. They managed to soak in all possible African influences to create a unique sound that is as eclectic as humanly possible. Following the extravagant electro hip-hop shoe on the A38 Stage is Dry the River from London. The band that is often compared to Mumford & Sons says that people coming to the shows are often surprised because they think their shows are very quiet and calm, although the exact opposite is the true.

We hope it is going to stay this way. Charming the audience next with her 80s synth-pop and her brand new record, Nocturnes is Little Boots from 7.50 pm. Peter Bjorn & John will be starting at 9.40 pm. Some things will never change for a specific generation: the band is always going to remain the one with the whistling song because of their megahit Young Folks. One of the most relevant performers of the festival is Woodkid from France. He will present you his contemplative, detailed ethno-pop at 11.30 pm. Following him is a young Danish artist, Rangleklods, who will be hitting the stage with his improvisations at 1 am. The boat brought his own programme series, Technokunst to the island as well. You can party to the sounds of Tommy Four Seven, Marcel Dettman, Isu and Dork from 2.15 am.

Friday is all about hip-hop on the Hungarian Music Stage. Starting the show are the boys from THESHOWCREW, followed by DSP. Singing about her Ghana- Hungarian roots is Sena from 5 pm. After that you can chill with Hősök, Sub Bass Monster and Halott Pénz. Returning to the stage is Sena again, this time with her band Irie Maffia following them are Punnany Massif, Brains and closing at 2.50 am are Akkezdet Phiai.