“Get Home Safe!” Traffic Safety Programme For Motorways In Hungary 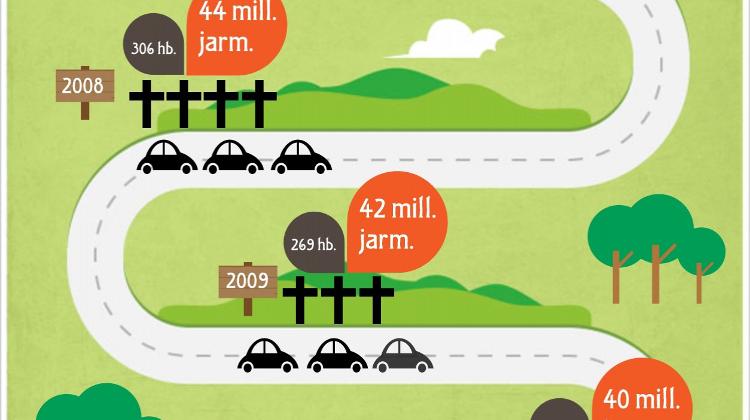 The total value of the New Széchenyi Plan package of developments targeted at the prevention of road accidents causing personal injury is over HUF 55 billion. The investments to be implemented on the expressway system in the first round, from a budget of over HUF 13.5bn, may be completed by the end of next year. The project launching event of the State Motorway Management Co. Ltd. was held at the Company’s customer service at Rest Area M3 Szilas.

The developments are meant to eliminate increased risk at accident accumulation spots, also known as accident nodes or black spots, by the solutions most efficiently applicable at the given sites. The developments which, individually, involve relatively low costs, are useful in helping reduce the number of accidents causing personal injury. The itemized project list was based on the recommendations of public road management specialists.

Along some 25 km of the entry section of M3 motorway towards Budapest, concrete deflector walls are to be erected and protective lights installed in the dividing strip. Along the section exposed to a daily traffic of up to 80 thousand vehicles, the risks of collision and congestion following as a consequence are to be significantly reduced. At the busiest spots along the whole motorway network, variable message displays, traffic surveillance cameras, meteorological sensors and traffic counter loops; at exit ramps, energy-absorbing cushions are to be installed. In addition to accident prevention, up-to-date equipments also serve the faster progress of and the provision of high-standard information for motorists.

At several places, wildlife escape ramps are to be modernised and the water drainage system improved in order to prevent water run-offs especially dangerous in winter; along several sections, high containment level safety barriers are to replace existing ones.

At the project launching event, Minister of State for Infrastructure Pál Völner said the national programme was one of the most significant initiatives in Hungarian transport policy. The results of the investments to be implemented along the entire public road and railway networks could soon be reflected in improved accident statistics. The successful completion of the first phase could be a powerful argument for continuing the work begun. Through the implementation of further developments already prepared, the financial envelope used could grow to HUF 72 billion.

Most accidents on motorways take place because of runoff, rear-ending in congestions or skidding, and collisions due to wildlife on the road are also frequent. The development work started on the expressway system is meant to prevent these most typical accident situations, Chief Executive Officer of the State Motorway Management Co. Ltd. Tibor Börzsei said outlining the major areas of intervention of the project.

The other planning project of the State Motorway Management Co. Ltd. with transport safety investments requiring a construction permit, is closely related to the developments now launched. Within the framework of this, plans for modernising the entry section of M3 motorway, constructing roundabouts at several dangerous junctions and increasing the number of truck parking lots at certain rest areas are expected to be completed by next spring.

For detailed information about the programme, see: http://erjhazabiztonsagban.hu/