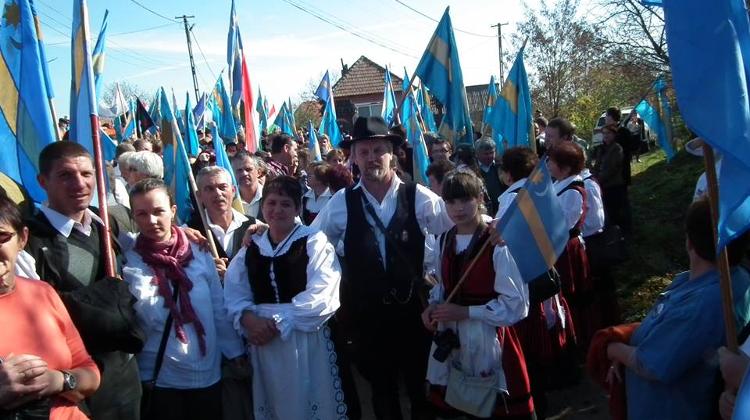 “We want autonomy, not independence,” “Romania is our country too,” read placards under which an estimated 120 000 Szeklers (a subgroup of ethnic Hungarians in Romania) were marching along road no. 11 between Braşov (Brassó) and Bacău (Bákó) on Sunday, October 27.

The marchers met at 14 meeting points, listened to an ecumenical service, then formed 26 column and the northern columns set out southwards and the southern ones northwards. When the columns met, the total column was 53 km long.

The marchers heard the speakers of the event on portable radio sets. Balázs Izsák, president of the Szekler National Council (CNS), read out a declaration. The crowd heard the Hungarian and the Szekler anthem and then dispersed.

Ozun was among the meeting points. Earlier this year a binding court order obliged its mayor, István Ráduly, to remove the Szekler flag from the town hall.

Before a crowd could have left Ozun for the march, the mayor called what he called a “crisis meeting” because local police prohibited the march of hussars (reenactors of 19th century Magyar light cavalry) on horseback claiming that movement of horse drawn vehicles or people on horseback on highroads contradicted the driver’s manual.

László Kádár, commander of hussars, contradicted the police order and said they would march, come what may, even if they are fined. Some of those present asked him how the hussars would respond if police blocked their way. Then László Borbély, a deputy chairman of the Democratic Union of Hungarians in Romania (UDMR) and a former minister, intervened and declared that if need be, he would use his influence to ensure free passage for the hussars. In an improvised speech Borbély stressed the importance of joint action. “We mustn’t yield to pressure! We are strong and mustn’t waste that strength!” he told the crowd. [Eventually the hussars were allowed to join the march.]

The Romanian authorities went out their way to ensure the security of the marchers. That having said, a sabotage was suspected when at Miercurea Ciuc (Csíkszereda) the engine of a train hired by the UDMR broke down. About a thousand passengers were told to wait for two hours until another engine arrives. But then they would have been late for the march. It only took about ten minutes before all passengers cleared the railway station. Some used their own car or pooled other vehicles – this way or another, each of them reached their meeting point, said to this paper Attila Korodi, a member of the Romanian Chamber of Deputies.

The pastor of Ozun told his congregation in his sermon before the march: “We must not give up. Today they order the removal of our flag from the town hall. Perhaps tomorrow they will prohibit our councilors to attend meetings in our traditional Szekler costume. Where would that lead?”

“I doubt that such events can convince the Romanians to grant autonomy to the Szekler Land but occasionally we have to demonstrate that we are here and that they should count with us,” told this paper Attila Markó, a member of the Chamber of Deputies at Reci (Réty). (A court of first instance has sentenced him to three years in jail for returning to the Reformed Church the “Székely Mikó” secondary school.)

“We will not get autonomy just by talking about it. Today the Szekler Land gets more money from the state coffers than the taxes it pays,” told this paper Zoltán Benedek, an entrepreneur. He and his brother rode their bicycle between Sâncrăieni (Csíkszentkirály) and Ozun.

“Let us be realists. If the Szekler Land got autonomy tomorrow, it wouldn’t be viable. But it only takes a few years and everything will change here. Even the Romanians acknowledge that the Szeklers are getting more serious and they can be relied on. Szeklers love to work. What we need now are goals to work for,” Zsombor Benedek said.

Some of the participants commented that it would have been more effective to gather in a single square. A hundred and fifty thousand demonstrators in the main square of Miercurea Ciuc would have been a more striking sight, a young man explained. He and his friend asked not to be named. They think the CNS calls such major demonstrations too often, which can weaken the impact of such action.

I asked him why he came anyway. “There is no contradiction in that,” he answered. “Whatever I think of such events, we have to close ranks.”