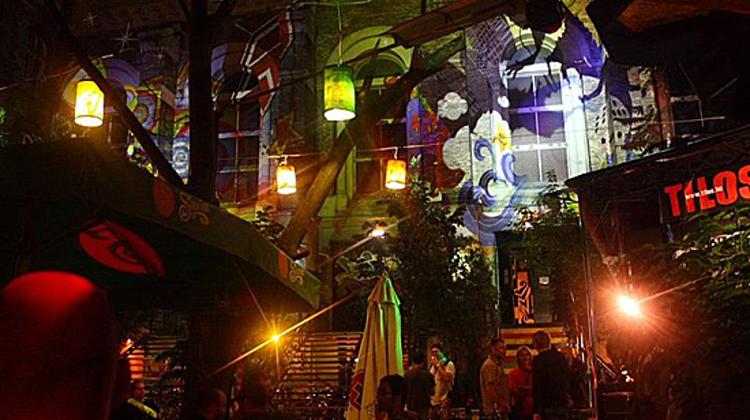 Once Jewish quarter now nightlife hot spot, the centre of Budapest’s 7th district has raised some eyebrows this summer. It’s more than just a landmark area with hoards of drunks consuming premium wheat beer. It’s a densely packed startup scene of blooming characteristic enterprises such as cafes, restaurants, pubs and - wait for it - the signature ruin bars in the backyards of abandoned houses. Eastaste had set to map out the sonic branding strategies of the Ruin Pub Quarter.

Hover over the map to see more!

Although not a new phenomenon, sonic branding is often an unknown expression. Sonic branding is about branding by harnessing music’s power to reinforce brand identity. Sound awakens associations and generates required emotions. It may come across biased from a creative music agency but when it comes to strong brands, strategic integration of relevant music is fundamental.

Music is not only a major force of brand identity in national TV ads or pop industry collaborations but can also alter the perception of drinking joint. Hence the connection between the Ruin Pub Quarter and sonic branding. Our quest was to see to what extent these venues apply sonic branding when they build their brands. While the term itself didn’t really ring the bell at any of the places we checked, many of them made extra effort to have a distinctive sound and nurture culture. Surprisingly, the sonic palette of the Ruin Pub Quarter was more colorful than we expected.

The mapped area is literally the epicentre of the nightlife zone, where pub crawling is usual. It’s not surprising that the majority of venues target the same age group: 25+, mainly between the ages of 30-40. Each management seem to have their own interpretation of the ideal target audience. While Spíler counts on “quality-conscious, cool people but not posers with non-commercial approach.

” Kolor relies on “18+ intelligent music lover youngsters.” Fekete Kutya (Black Dog) simply likes pleasant guests, while Központ focuses on “urban intellectuals, creatives and artists”. Léhűtő is specialised to craft beer lovers, Méter measures the guests’ demands in metric units, and Telep does the same with insider friend scores and so on. Our idea was to create playlists which represent the sonic image of the bars around Gozsdu-udvar, the very hot spot (- click on the map).

First we thought there would be significant corrections, but the result was clear: even though Bob Marley songs and a few last year summer hits appeared everywhere, the majority of the playlists were different in genre and mood. Kolor appears to be most conscious about its music choice; it uses self-developed software that controls and changes tempo and mood by the period of the day.

The weekly program is structured by bpm’s, weekdays are for slower and more experimenting artists weekends are for dance floor oriented house djs. The Gozsdu Manó Klub’s music playlist is managed by the owner. Központ might be more genuine and credible since the owners themselves are djs and active actors of the nightlife scene. They have a local streaming program. Telep might seem as a hipster place but the purpose is to create an intimate atmosphere of friends. The owners consider Telep their own living room.

Spíler has hired a dj to create a playlist for us. The most colourful and eclectic playlist comes from the restaurant 400 providing a selection that includes Goran Bregovic, Maroon5, Fluor Tomi and Tankcsapda. Mika Tivadar Mulató sounded to be up-to-date as well in terms of underground electronic music and alternative Hungarian songs. Csipesz plays the latest trendy R&B/Hip-hop songs such as hits by The Weeknd, Asap Rocky, or Action Bronson. Hip-hop beside jazz and reggae are generally the most popular genres at the venues we observed. Mainstream radio music is not particularly present.

Certainly, there are places where setting up sonic branding strategies is not a conscious decision but rather an instinctive demand. The smaller places typically play background music of their own taste – there is a much smaller virtual distance between the audience and the management here than in a more sizable and commercial place. Thus the sonic image in a modest place is defined by personal taste of the crew.

Ellátó Kert’s manager has admitted not having a distinctive musical taste, while according to Castro’s crew their management is not really interested to put together a playlist which defines the image of the restaurant so we were welcome to make a selection from their music player. The overview is not complete and representative and some smaller places have been excluded.

Even though sonic branding is used by a few bars, most often than not it’s not a conscious choice. The lack of sonic branding might not seem to affect profitability on the short run, but it’s definitely a missed opportunity of cost effective brand building. It’s a tool that not only influences direct feel of comfort but also communicates the venue’s self-definition and affinity. After all, trend-adopting interior design and quality products alone might not cut it. Music can make a big difference in how one percieves a venue, when one is too conscious and picky.