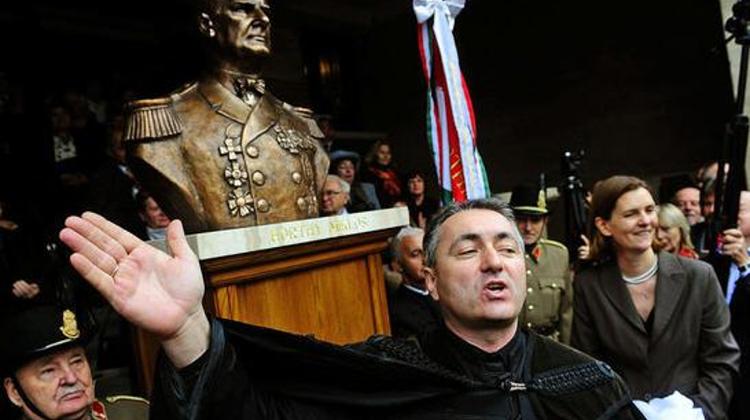 Sunday marked the unveiling of a bronze bust of Admiral Miklós Horthy. The bust is located on the property of a Hungarian Reformed Church in Budapest, but it is visible from the busy Szabadság tér. The minister of the church is Lóránt Hegedüs, whose wife is a Jobbik member of parliament. This is not the first time that Hegedüs has prompted controversy with his extremist political views and actions. A few years back there was already a more modest Horthy bust, but that one was by and large hidden from public view.

The main reason for Hegedüs’s admiration of Horthy is the governor’s alleged role in regaining some of the territories Hungary lost after World War I. We mustn’t forget that November 2 was the 75th anniversary of the First Vienna Award negotiated with the assistance of Nazi Germany and fascist Italy. As a result of the Award, Hungary regained a sizable portion of Slovakia. Less than two years later, on August 30, 1940, the Second Vienna Award, also arbitrated by Germany and Italy, granted Hungary some of the territories lost to Romania.

Naturally, Horthy is only a symbol of these apparent successes of Hungarian diplomacy. The negotiations themselves were done by the Hungarian government, but Horthy was the one who as head of state rode on his white horse into the larger cities of the regained territories. It is this Horthy that the Hungarian extremists who gathered around the statue admire.

One often hears people who admire Horthy say that the admiral was responsible for Hungary’s relatively fast recovery after the war. These people don’t know that, although the whole interwar period is named after him, Horthy’s power was constitutionally extremely limited. Especially in his first ten or twelve years or so in office he had little say in the everyday running of the government. In the thirties, unfortunately for the country, he insisted on and received increased political power. Horthy knew practically nothing about politics before he became governor, and his skills didn’t improve greatly during his twenty years in office.

What these extremists admire most, his alleged skill in recovering former Hungarian territories, was actually his and the country’s undoing. For the good offices of Nazi Germany in November 1938 and August 1940 Hitler demanded loyalty from Horthy and Hungary. It was difficult to say no to the benevolent Führer who took Hungary’s side during the negotiations with Slovakia and Romania.

The other issue is the anti-Semitic nature of the Horthy regime and Horthy’s personal responsibility for the Holocaust in Hungary. It is undeniable that the interwar Hungarian governments actively helped the Christian middle classes achieve economic and intellectual prominence to the detriment of the Jews. The numerus clausus (1920) that restricted the number of Jewish students at the universities was intended to further that aim of the government. Anti-Semites of those days talked about “the changing of the guard,” meaning altering the composition of the economic and intellectual elite. Most leading Hungarian politicians, including Horthy, would have liked to see a Jewish-free Hungary, but they knew that shipping out all the Jews would have terrible economic consequences. Yes, there was pressure from Germany, but many people in the government actually welcomed that pressure since it would facilitate the “changing of the guard” which hadn’t proceeded as rapidly as they would have liked.

As for Horthy’s personal responsibility for the expulsion of the Jews, I have to side with the majority of Hungarian historians who blame him for what happened. First of all, Horthy was not powerless even after the German occupation on March 19, 1944. He could have forbidden the Hungarian administration to make the necessary preparations to send about 600,000 Hungarians to Auschwitz. Because everything that was done was done by the Hungarian authorities. If he could stop the transports in July, he could have ordered the ministry of interior to refuse to cooperate with the Germans earlier on. The Germans simply didn’t have the personnel or the know-how without Hungarian help to organize such a mass expulsion. Without the assistance of the Hungarian Railways, for example, no transport could have left the country. It was only when Horthy received threatening calls from all over the world in July 1944, including Great Britain and the United States, that he decided to act.

Finally, I would like to touch on the Orbán government’s position regarding the Horthy regime and Horthy himself. An unfolding Horthy cult is undeniable. It started with Jobbik, but eventually Fidesz decided not to try to stop the tide. Viktor Orbán himself didn’t promote the erection of Horthy statues or naming streets after Horthy, but he didn’t stand in their way either. Just yesterday in parliament he quite openly admitted that what he wants are the votes of those who voted last time for Jobbik. And if that is your aim you don’t condemn the Horthy regime’s foreign policy or admit its responsibility for the deaths of Hungarian Jews.

Even today, after the unveiling of the statue and after outcries from the Hungarian and the international Jewish community, Fidesz refuses to take a stand. János Lázár already announced that it is the job of historians to determine Horthy’s role. As if historians hadn’t done their job already. Although no full-fledged biography of Horthy has yet been written in Hungary, Thomas Sakmyster’s book, Admiral on Horseback: Miklós Horthy 1918-1944. appeared in English in 1992 in the United States. Since then we have even more information on that period, including archival material that indicates that Horthy most likely knew about Hitler’s plans for the extermination of the Jews much earlier than the summer of 1944.

An incredible number of documents have been published ever since the 1960s on German-Hungarian relations. Selected private papers of Horthy were published in English. Documents from the Hungarian Foreign Ministry were also published in several volumes between 1962 and 1982. Hundreds of articles appeared on different aspects of the Horthy regime. So, those Fidesz politicians who urge historians to work harder should first sit down and read a few books and articles which are readily available. Then they can decide whether it is appropriate to embrace the Horthy regime or not.

The time has come, I think, for the Orbán government to announce unequivocally that it does not seek its forebear in the different governments of the Horthy period. Not even the Bethlen governments because Prime Minister István Bethlen was an arch-conservative whose ideas were behind the times even then, and in the twenty-first century they have no place in a country that belongs to the European Union.

It seems that the Hungarian Reformed Church at least has finally taken action. The church is beginning disciplinary action against Lóránt Hegedüs. I don’t know whether they will have the guts to defrock him, but in my opinion that man has no business whatsoever leading a spiritual community.