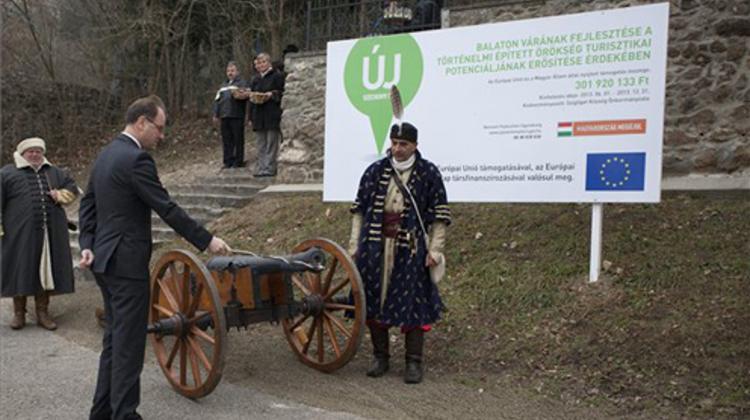 After a renovation amounting to HUF 302 million, the Castle of Szigliget was inaugurated on Thursday. At the ceremony, Tibor Navracsics, Deputy Prime Minister, said that the renovation of the castle was an excellent example of how a community living at one of the most beautiful spots of the Lake Balaton region is able to grasp an opportunity arising out of the historical past.

One of the gems of the Balaton Uplands, Szigliget has had to “provide for” its castle under unworthy circumstances for a long time, the Minister of Public Administration and Justice added. “This is a historical treasure that has for long years missed an added value that could make it more attractive, and elevate it to its proper rank”, Tibor Navracsics noted.

The Deputy Prime Minister also mentioned that since it cannot make a living any longer from serving as a meeting point for East and West Germans, the Balaton Region must come up with something new, something more to attract an increasing number of tourists. This is the very goal served by the Szigliget Castle development project as well.

However, attention should be paid to being careful about making Szigliget over-attractive, and to endeavour to preserve the uniqueness of the place, as this settlement has managed to keep its old intimate atmosphere, and even its character of being a border castle by guarding its traditions, Tibor Navracsics added.

As a result of the project that was implemented entirely from European Union funds, new walls, roofs and towers have been erected to reflect the original state of the castle more accurately. A chapel and a blacksmith’s shop have been built as attractions, and other historical objects and tools also help visitors to get an idea of everyday life in the period. The project also included acquiring modern stage paraphernalia, sound and light technology equipment, castle cameras and touch screen terminals.

According to the concept of equal opportunities, an interactive exhibition area has also been set up for disabled visitors, where images displayed by the cameras installed in the castle may be seen. Delivered to the care of the local government five years ago, the castle has had over one hundred thousand visitors in recent years. Since then all income from entrance fees (about HUF 70 million last year) has been spent on preservation and development of the castle.

he settlement and its castle would like to become one of the key targets of cultural and heritage tourism for domestic and foreign visitors alike. As a result of the project, the surroundings of the castle are reborn as well, and new jobs have also been created in the area. After the date of inauguration, the Castle of Szigliget will be open to visitors as of 1 January 2014.