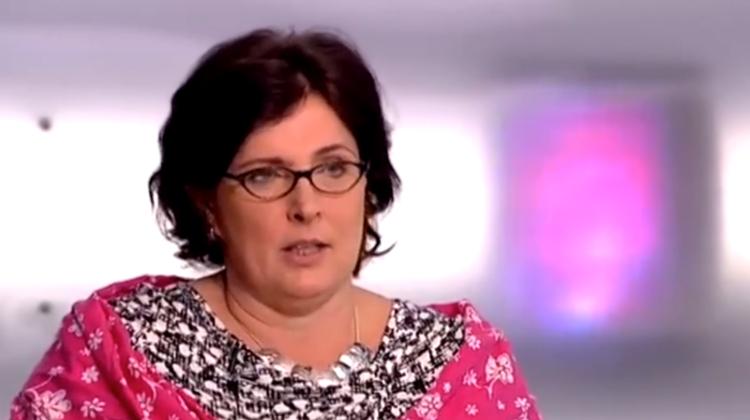 Women make up just 9 per cent of Hungarian members of parliament. In this regard Hungary ranks 122nd out of 140 countries. Upcoming parliamentary elections have sparked public discussion of the role of women in politics, family life, and in the country as a whole.

Politics Can Be Different (LMP) MP Katalin Ertsey (pictured above) publicly challenged FIDESZ politician Ildiko Gall Pelcz to debate women, their representation in government, and their role in society, after Pelcz stated the fact women are underrepresented in parliament is not a problem, and that it is simply a matter of men being more “reliable” and more “successful” in “reaching their goals” given “current societal circumstances”. Pelcz is quoted as saying “we should not be impatient, because there are some changes that will not occur in our lifetime”.

Ertsey believes the Hungarian electorate has a right to know the various parties’ stances on women’s issues such as maternity leave and the introduction of a quota for representation of women in parliament.

The Hungarian Women’s Lobby Alliance asked parties to briefly state their position on women, society and politics by filling in a survey.

MSZP supports the 40% quota encouraged by the European Union (EU).

LMP also supports introducing a quota beginning with state owned companies and later extend it to the private sector as well.

The Liberals believe the government should only interfere in the market where absolutely necessary, and that it would be more beneficial to support women and their development from early childhood by providing them with opportunities to advance and enhance their skills and potential in all fields of work.

Együtt-PM believes the main problem to be wage disparity and that laws on equal pay need to be enforced.

The FIDESZ representative stated that she does not entirely believe that there are ‘male’ or ‘female’ fields of work, as hers is said to be a male dominated profession, but she feels perfectly comfortable working in it as a female. “If a woman feels a strong calling and is passionate about it she can achieve anything”. She acknowledges that there is a need for more women in positions of power, and believes that the extra GYED paid to women on maternity leave will result in more female professionals.

On whether retirement for women after 40 years of work is a good idea, and how their party would address the issue:

The Liberals want to amend existing retirement laws so that women can retire after 40 years regardless when they complete higher education.

MSZP also thinks that retirement after 40 years is a good approach, and would amend the laws to make them more gender neutral.

LMP does not support laws designed to keep women out of the workforce. A system where partial retirement with part time employment is available would be far more beneficial for society.

DK would keep laws that allow women to retire after 40 years, but would also like to increase the possibility of women 50 and over finding employment.

FIDESZ supports the current provisions of the law in that it gives elderly women the opportunity to help raise grandchildren.

Együtt-PM would keep the laws allowing women to retire after 40 years because citizens base their decisions on consistency and laws they expect to follow them through retirement. However, Együtt-PM criticizes the government for perceiving women 55 and over primarily as grandmothers. Együtt-PM intends to focus more energy on women being given the choice of partial retirement combined with part time employment.

The questions and answers can be read in Hungarian here