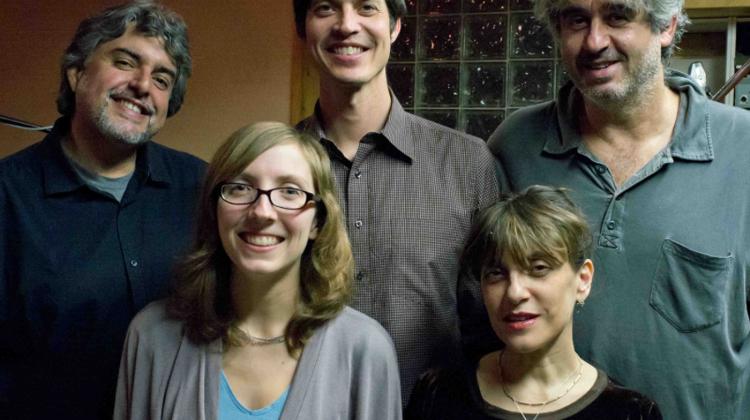 Ches Smith and These Arches set to play Trafo.hu - Ches Smith is a master drummer of the new generation, a self-styled improviser who has studied jazz and modern percussion and is open to alternative rock, noise and metal as well. This wealth of styles characterizes his music for These Arches, the band with which he brings four brilliant New York avant-jazz musicians to Trafó: Tim Berne and Tony Malaby on saxophones, Mary Halvorson on guitar and Andrea Parkins on accordion and electronics.

‘Smith and his sonic buccaneers blow, wheeze, bang and skronk away with merry glee and abandon. But there’s order to Smith’s liberating madness—a deliberate and articulate structure to compositions based in an avant-garde rock aesthetic… the drummer toes the lines between planned and chaotic, tension and looseness, harmony and discord, soul and blues. Underlying humor informs most of the hard-driving work. As does Smith’s familiarity with cartoon music and its spasms of furiousness, movement and zany plot.’ (Downbeat, ****½ review of the album Hammered by Ches Smith & These Arches).

Born in San Diego, CA and raised in Sacramento, Ches Smith came up in a scene of punks and metal musicians who were listening to and experimenting with jazz and free improvisation. He studied philosophy at the University of Oregon before relocating to the San Francisco Bay area in 1995.

After a few years of playing with obscure bands and intensive study with drummer/educator Peter Magadini, he enrolled in the graduate program at Mills College in Oakland at the suggestion of percussionist William Winant.

There he studied percussion, improvisation, and composition with Winant, Fred Frith, Pauline Oliveros and Alvin Curran. One of Winant’s first “assignments” for Ches was to sub in his touring gig at the time, Mr. Bungle (here he met bassist / composer Trevor Dunn who would later hire him for the second incarnation of his Trio-Convulsant).

He also leads a quartet called These Arches (with Mary Halvorson, Tony Malaby, and Andrea Parkins), and a solo percussion project called Congs for Brums. He currently lives in Brooklyn, NY.  More from the source: Trafo.hu