Balaton Sound Festival In Hungary Is Ready To Kick-Off 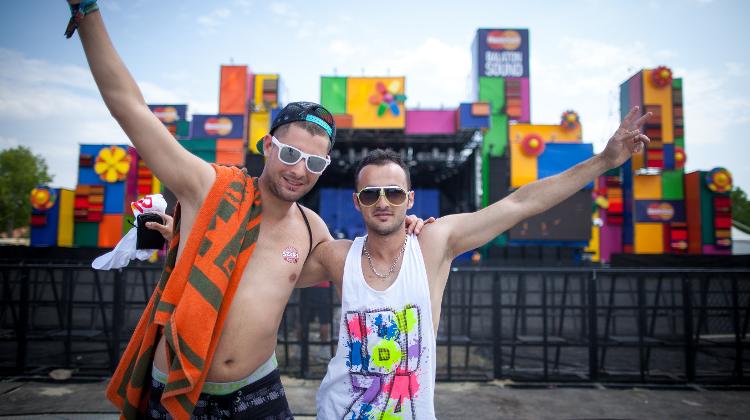 150.000 visitors are expected to Zamárdi at Lake Balaton, Hungary for the 8th edition of MasterCard Balaton Sound. The festival is starting on Wednesday night and presents colorful and quality acts for 4 days and 5 nights. The unique and visually stipulating venues will host headliners like Wiz Khalifa, David Guetta, Alesso, Armin van Buuren, Clean Bandit, Martin Solveig, Richie Hawtin and Disclosure. Passes and day tickets for Friday and Saturday are already sold out, but day tickets for Thursday and Sunday are still available.

At the very first Balaton Sound in 2007 very few insiders actually thought that the ‘Hungarian sea’ can be the right venue for a huge festival. However the organizers did believe in the concept and time proved them right. Zoltán Fülöp, one of the founders of the event, said: “We positioned Balaton Sound as a premium festival that reflects the quality of the environment, services and the program itself. This is why so many people have discovered the beach of Zamárdi and the lake, in spite of not being a typical festival-goer.”

Balaton Sound (today MasterCard Balaton Sound) has been a real success story for seven years now, moreover it has been awarded as the Best Medium-sized Festival two years ago by the European Festival Awards and after Sziget it attracts the most people from abroad to Hungary.

Norbert Lobenwein, the other founder of Sound, has added: “While at the start in 2007 couple of ten thousands conquered the beach of Zamárdi, this time we expect 150.000 guests from Hungary and abroad.” The main organizer also said that Balaton Sound was the first Hungarian festival to sell all passes before the start of the event a couple of years ago. “This year, passes were sold-out months before opening the gates and today only day tickets for Thursday and Sunday are available” - he added. Organizers kindly ask everyone to only buy tickets from the official retailers and avoid street vendors or internet advertisements, as most of these black market tickets are fake.

Starting from Wednesday afternoon the gates will open and festival-goers can explore the new venues. As the organizers said: “the audience will be amazed of the unique buildings and visuals that are made especially for this occasion.” The visuals of the Main Stage won a lot of design awards in 2013.

Approximately 30 concerts will be streamed online thanks to Telekom, available at www.balatonsound.com, ustream.tv/telekom-mastercardbalatonsound2014 and telekom.hu/fesztival pages.

Lake Balaton is one of the most important touristic destinations in Hungary. Gergely Horváth, director of the tourism branch of the Hungarian National Tourist Office, said: “For years now, Balaton Sound has been one of the most important and most attractive events at the Lake Balaton region, not only popular among Hungarians, but also among foreigners, as the number of international visitors is increasing every year.

The Hungarian National Tourist Office awaits visitors with not only tourist information at Sound, but with many fun attractions. A special folk dance simulator will test the dance knowledge of those ready to play, while with the help of a digital postcard sending tool visitors can have their unique postcard taken at any of the Hungarian sights and these could be sent to any address.”

MasterCard Balaton Sound also joins the Green Festival campaign that was successfully tested a week ago at VOLT Festival. When the festival fan gets the Festipay cashless payment card, for a deposit of 500 HUF they get a Green Festival bag in which waste can be collected. When leaving, the bag with the trash should be handed to any of the collecting points and the deposit will be given back with a T-shirt discount coupon and a certificate of being an environmentally friendly festival visitor. The organizers draw attention to the fact that the audience can do the most in everyday life for their own environment.