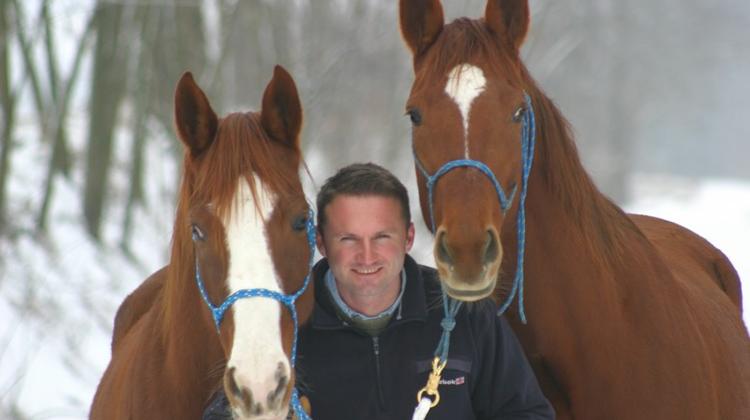 “Horse whisperer” - that's the moniker used of trainers who can develop a special rapport with horses by their presence, words and body language. Gyula Mészáros doesn't use that term and yet he is Hungary's best known horse whisperer.

Magyar Narancs: Why do you avoid the term “horse whisperer”?

Gyula Mészáros: That phrase is not apt because horses mostly communicate with body language but during their training words are used to give them instructions. It has been recently discovered that the electrical activity of the brain of horses is similar to that of the highly intelligent dolphins. Words are not a natural medium for the communication of either dolphins or horses so it is more purposeful to use our body language when approaching a horse.

Q: How to handle a horse?

A: I approach the horse without expectations and gently and empathetically submit myself to its will. Horses are much more intelligent and cooperative than we think but when exposed to pressure, they become withdrawn. I strive to win the horse’s confidence so that it should accept me as its mentor. If I can make that, it will return to me spontaneously.

No horse would ever impose its company on another horse and neither would any horse force another horse to sit or lie down – so I think man shouldn’t do such things either. What I appreciate the most – and my students think the same – is when, during a period of rest, a horse spontaneously lies down next to me: it wishes to have a rest in my company. When that happens, for me it matters more than the trophy of any competitions.

We should handle beings in harmony with their inborn character. Mind you, horses are by nature timid. They prefer standing, walking and browsing. That’s what they normally do – when left on their own, they rarely gallop. By contrast, nowadays it is their holders’ first thought to make them gallop. That is contrary to what a horse wishes to do. A man who considers his horse as his companion should remember the saying: after each gallop, the horse is left with one gallop less.

Q: Who were your instructors?

A: As I have been drawn to be in the company of defenseless beings since childhood, I sought instructors who avoid using force in training horses. I met the famous Hungarian trainer, Gábor Monspart [1906–1997; see http://bit.ly/1l3r49I] in the late 1980s. At that time Monspart, a former cavalry officer, headed the Spanish Riding School at Örkénytábor [today Táborfalva, Pest county]. Besides, he trained the Hungarian national equestrian team for the three-day event [dressage, cross-country and show jumping] in the 1980 Moscow Olympic Games.

Then I and my family resettled in New Zealand, a country with a glorious tradition of equestrian contests, including the three-day event. In New Zealand practitioners regard horses as their companions: horses are usually allowed to browse alongside cattle undisturbed.

Having returned to Hungary I attended the Faculty of Livestock Farming at the Agricultural College of Kaposvár. Upon graduation I wrote articles to Hungarian equestrian magazines. However, with time I grew disillusioned about Hungarian equestrian life. And then, before I quit equestrian journalism for good, my editor in chief told me to travel to Wiener Neustadt [south of Vienna in Austria] to interview an international equestrian celebrity. I thought I would put him some stereotyped questions, put the interview on paper and close a chapter in my life.

The horseman I was supposed to see was Pat Parelli.

The show he conducted lasted for five hours. It blew my mind. I knew that he was the man I had sought for all my life. He handled horses with ease and elegance, which convinced me that there is an ideal attitude to horses after all. Parelli reassured me that what I had earlier thought of horse training was correct. Within a few weeks after his show I managed to lead horses and jump with horses without bridle or saddle.

Later on I attended an equestrian course of the famous ethologist, Dr Robert M. Miller and a so-called imprint training that followed the birth of a foal. [For more information on Miller, click on www.robertmmiller.com/]

Last year I was invited to take part in a colt starting competition in Kentucky. [About colt starting see http://bit.ly/1tRjzvW] In that competition the task was to develop rapport with an unbroken colt so that eventually the colt should walk through a course under saddle. No Hungarian competitor has been invited to such an event before.

Q: The horse industry is booming in Hungary.

A: In Hungary most horsemen and horse owners have become alienated from nature. Horses are viewed merely as hobby pets for weekend leisure and they are forced to spend all their time in riding schools. Horse owners forcibly impose their will on their horses. But it should never be forgotten: God created horses to be our companion animals. The mission of horses is to help humans in peace and war.

Q: In Hungary it is customary to shoe horses, put a saddle on them and use a whip during their training.

A: The problem is not what we expect from horses but how we communicate it for them. Sitting on their back and putting a halter on them is no problem but horse people tend to ignore their pains, natural speed and cognitive capabilities. Parents are unaware that the horses their children sit on might be semi-feral. But all parents check is that their child should wear a riding helmet and a spine protector. Parents want to force their will on child and horse alike. That has nothing to do with natural horsemanship.

It is possible to force a horse to follow such instructions but sooner or later it gets fed up and revenges predatory behavior. That explains the “accidents.” Putting on a helmet and a spine protector will not spare you from accidents: a humane relationship must be developed with the horse. All too often I see horses that are used as slaves. Tell me: if you wished to have a cup of coffee in a café with a woman, how would she respond if you threw a lasso around her neck and hauled her there?

Q: How should we approach horses?

A: Horses deserve better. First of all, we should come to know them. Then we should slow down to their natural pace. If we are impatient and skip the unhurried process of getting to know each other, the human–horse relationship will never become intimate. Let me emphasize once again: horses are very shy. [Before horses were domesticated, they were hunted for their meat. Translator’s note] The first thing that always occurs to a horse is whether or not the creature next to it poses a danger to it. Each horse needs what I would call an advisor/mentor. That’s how a herd of horses is spontaneously organized: the mentor is an experienced mare.

Horse guardians [i. e., the handlers] should humbly adjust their conduct in such a manner that eventually the horse should select them as its mentor. In such exceptional moments the mentor replaces the horse’s dam [female parent], put metaphorically, the mentor gives birth to the horse.

No doubt, the human–horse relationship can also be built on fear but that is light years from partnership. In the wild horses are never aggressive to one another. They only become vicious and intractable due to abuse by humans.

Q: What is the ultimate goal you can achieve with your “horse-centered” methods?

A: Horses are claustrophobic. When they sense being under pressure to accomplish a task, they might mentally close. Thereafter you have what I would call an autistic animal. But if a foal’s life begins in a gentle atmosphere and with time it is the horse that chooses you to be its mentor, then it will fulfill your most various instructions, including putting a saddle on it.

By contrast, if a horse doesn’t like you, it shows that with unequivocal body language gestures, as for instance, jerking up its head, grinding its teeth or twirling its tail. You can never win a horse’s confidence if you use force in its training.