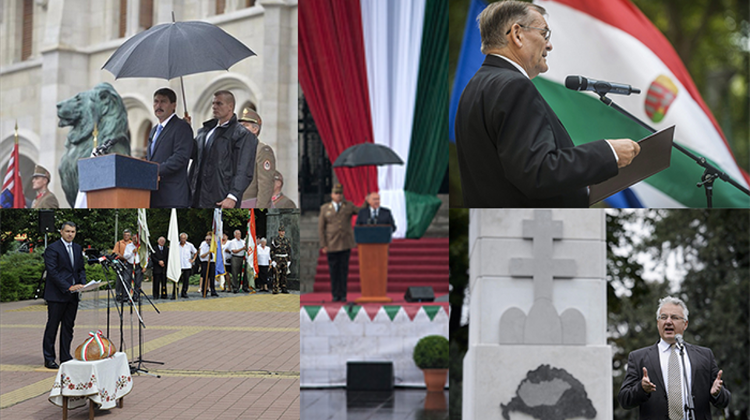 The independence of our country is not a gift, but rather an inestimable value for which every nation must struggle”. - President János Áder, 20 August 2014

August 20th is the celebration of the founding of the state of Hungary. Index.hu notes that “the leaders of our country at this time share with us forward looking thoughts rooted nonetheless in Hungary’s 1000 year old past”.

With municipal elections scheduled to take place in October, various prominent government officials opted to give speeches in their home towns.

Sándor Lezsák (Fidesz), deputy president of parliament, told a crowd in Kiskunfelgegyhaza Saint Stephen connected Hungary to the camp of western latin Christianity in such a way as to preserve the earlier Hungarian tradition. He said that it was a “lie” that the movement towards Europe was necessary in order to fundamentally break with Hungarian traditions. “Saint Stephen himself rejected such cockeyed allegations”. Lezsák told the crowd “even in the midst of great difficulties (Saint Stephen) did not ape the proconsuls of foreign powers here as so many domestic leaders did with such pretense during the system change.” He reminded the crowd that “Hungary has to be run in a Hungarian fashion following its traditions”.

Fidesz managing vice-chairman Lajos Kosa told a crowd in his home city of Debrecen “what Saint Stephen took to completion is without precedent in the history of European peoples”. He told the crowd that a people who came from the East to make their home in the West were able to adopt to Europe, and that with the adoption of Christianity to this day the country is still successful. “Over the past thousand years we have created a community in the Carpathan basin that was able to work as a real integration” said the mayor of Hungary’s second largest city.

Chanceller János Lázár told a crowd in his home town of Hódmezővásárhely “Saint Stephen’s day is Hungary’s birthday. The symbolic date of the birth of the Hungarian state is about building. This day is a symbol in the Christian world of our place and role in the European community going back hundreds of years.”

KDNP chairman and former Deputy Prime Minister Zsolt Semjén told a crowd in the historic city of Eger, famous for withstanding a lengthy Ottoman siege during the middle ages, that “the celebration was an opportunity to draw strength and take pride in the examples of our ancestors” and “to learn the lessons of our history”. Semjén called Saint Stephen’s accomplishment “ingenious” in that it created a Hungarian state so that “the Hungarian nation might remain.” According to Semjén, “souvereign Hungary was the first fundament of Saint Istvan’s creation,” to which he added “this country will only build up if all of us are little Saint Istvan nation builders at the place where providence delivered us”.

On Saint Stephen’s day, in addition to celebrating the founding of their country, Hungarians celebrate the making of bread. Agriculture minister Sándor Fazékas told a crowd in Szolnok “(t)here isn’t a people in the world for whom bread fills so important a role as with us Hungarians. At the same time it means life, livelihood, and the tasty, aromatic sustenance that we need each day.”

President Janos Ader told the crowd gathered in front of parliament “the respect we deserve we ourselves must demand just as we are entitled to the same respect we give others”. Ader said “our values can only develop along western lines”. However, he pointed out that “the independence of our country is not a gift, but rather an inestimable value for which every nation must struggle”.

“Ascension is only born if the responsibility between the state and its citizens is in balance,” he said, “and if the state does not only put responsibility on the shoulders of its citizens, but also behaves in a responsible manner towards its citizens.” He said we should learn from our mistakes, and that we should not seek to increase the number of our opponents, but rather to increase the number of our allies. “This is the best way to protect our country and defend our homeland” said Hungary’s head of state.

Áder evoked the country’s historical turning points from which he said it was worthwhile to learn. The First World War broke out one hundred years ago, after which “our nation was turn asunder for a long time” and, 70 years ago, the Jewish and Gypsy countrymen were deported to death camps. “We’ve had 70 years experience to know that the state should never turn against its own citizens in the name of ideology.” He added that the Soviet troops were able to extinguish the Hungarian fight for freedom in 1956, but could never extinguish its appetite for freedom.

“25 years ago began the irrevocable process of peaceful, bourgeois transformation, and the Hungarians initiated the reunification of a Europe divided by the iron curtain” he said. “It was then that we again made it known that we remain faithful to the legacy of Saint Stephen”, noting the pronounced western orientation of Hungary’s first king.

Áder also cited as important turning points Hungary’s admission as a member of NATO 15 years ago and its accession to the European Union 10 years ago. Delivering the oath to a number of army officer candidates, Áder said that their “duty to serve in a manner so that our homeland, as a member of NATO, could always have enough strength so that no one could disrupt the peace. Ader said that as the head of state he believed the most important task was to express respect for all our fellow countrymen, among them parents, grandparents, and the country’s youth.

Áder said that we should respect that we live in peace and freedom. “Respecting accomplishments advances our personal and collective fates”, he said, adding that “we need to protect our natural resources for the next generation”.

Áder closed his speech by quoting Ferenc Kölcsey, author of the Hungarian national anthum. “Homeland before all else.”

Earlier fears that the traditional August 20th fireworks display would have to be postponed due to inclement weather proved to be unfounded, and tens of thousands gathered along the banks of the Danube in downtown Budapest were able to enjoy a spectacular fireworks display lasting nearly half an hour (at a reported cost of HUF 150 million/USD 435,000).