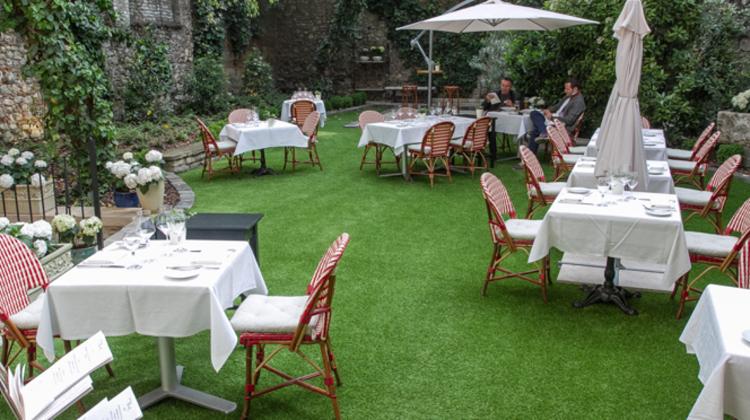 To urban dwellers - who are constantly surrounded by noise, and sometimes smog - a good garden is practically paradise. Being close to nature is refreshing for us all, so here we explore the hidden gardens of Budapest: from art cafés to top restaurants.

Walking down Király Street, one little shop is sure to capture your gaze. It focuses on home decor and souvenirs of the highest quality, a cooperation between Spanish, Italian and Swiss companies. But Arioso Café is more than that. As you enter the place you will see a lonely cake counter without seats or tables. The building is a more than 200-year-old monument; the café part was set up in its backyard, an incredibly silent garden with a magnolia tree, a swing, and sunshine.

Imagine you suddenly find yourself in a romantic French movie. Massolit is just like that: a cosy and friendly atmosphere, café and bookstore at the same time. The name ’Massolit’ is a pun, referring to Bulgakov’s famous novel ’Literature of the Masses’. And a bonus for expats in Budapest: all of the books here are in foreign languages.

Pierrot - the best known restaurant of the ’Várnegyed’ - is famous for its sophisticated elegance. You can also find it among the Michelin Guide recommendations since 2005. The building’s history dates back to the Middle Ages when it was the one and only bakery in Buda Castle. Pierrot opened in 1982 as the very first private café in the city. Nowadays it tries to recall the Austrian-Hungarian-Monarchy’s kitchen with its fascinating menu. The well-made dishes are usually served in a secret little garden with emerald-coloured grass and a stylish milieu. This romantic island is perfect for memorable moments, like a wedding or special rendezvous. From Jeremy Irons to Robert de Niro, Hollywood stars have visited Pierrot.

Focusing on traditional russian cuisine, Arany Kaviár Restaurant has been operating for more than 20 years. During this time the fine dining restaurant has earned plenty of gastronomy awards. Here we can find the city’s most delicious caviar, which is served with a traditional hot blini. For lunch you can choose the three-course bistro menu at a very friendly price. When dinner time comes, the elegant garden becomes more romantic with high-end champagnes, award-winning meals, and white chandeliers.

Half-way between Oktogon and Heroes Square sits Zelnik István’s Délkelet-ázsiai Aranymúzeum, where the former diplomat’s private collection can be seen. Behind the buliding you can glimpse the hidden oasis of Andrássy street. Due to the high moisture it feels like you’re on a completely different continent: waterfall, palm trees, and bamboos guarantee a tropical feeling. They often organize Thai and Indonazian dance performances.

Translated by Zsófia Lay for XpatLoop.com