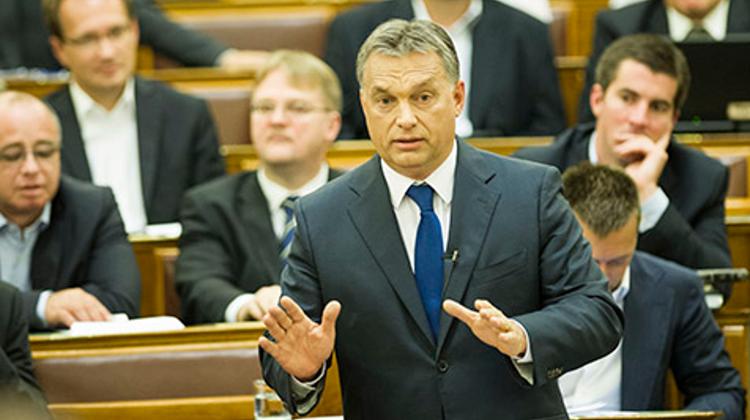 The international press this week responded en masse to the speech made by Hungarian Prime Minister Viktor Orbán (pictured left) near Baile Tusnad, Romania, on Saturday in which he said he would make Hungary an “illiberal democracy” and a “workfare state”.

The Romanian press was unsurprisingly the most concerned by the nationalistic rhetoric Orbán had propounded.

Right-wing liberal daily Romania Libera wrote that Orbán has shown “fascism with a human face” is being built in Hungary, a state of affairs that poses a threat to the whole of Eastern Europe. Evenimentul Zilei posited that Orbán had initially turned against liberal democracy because he felt alienated by the circles of liberal intellectuals in Budapest and chose the road of “collectivist authoritarianism and xenophobia”, political scientist Vladimir Tismanean explained.

Bogdan Diaconu, a nationalist MP, wrote in leading Romanian newspaper Adevarul that “Orbán should know full well that the highly charged nationalism he is advocating is not in the interests of the Hungarians in the neighboring countries.

Nationalism on one side of the border evokes nationalism on the other side. This is exactly what has happened in Romania,” he added. When the article was translated into Hungarian, the nationalistic polemic was countered with equally hateful and obscene comments from Hungarians, local site vs.hu noted in its own round-up of the international reaction.

Headline of the week went to Newsweek, which ran an analysis entitled ‘Hungary’s Mussolini’ Vows to Make the EU Member an ‘Illiberal State’. According to The Financial Times, Orbán had “just cemented his reputation as the problem child of the European Union. Mr Orban’s speech will exacerbate fears in Brussels that democracy in Hungary is at risk.

Nonetheless, some of the countries that Mr Orbán cited – such as Russia, China and Turkey – are hardly encouraging models for those who cherish democratic rights. Hungary’s peculiar path under Viktor Orbán also has implications beyond its borders. The Hungarian prime minister looks like a problem who is not going to go away,” the FT added.

The Wall Street Journal quoted Polish Prime Minister Donald Tusk’s reaction that Orbán’s comment about autonomy for Hungarians in Ukraine was” ill-timed, made when Ukraine was facing territorial claims by Russia”.

The Munich-based left-liberal newspaper Süddeutsche Zeitung said in an editorial that Hungary and the European Union will also have to consider whether an EU member country can remain after openly straying from the path of liberal democracy.

Meanwhile Czech business daily Hospodarske noviny said it is impossible to describe Orbán with Western political adjectives: he is neither left nor right, neither liberal nor conservative, but Kurucz. Contributors to the Croatian website index.hr agreed, saying Orbán is simply serving up “the old Kurucz traditions”.

The Irish Times gave context to the Orbán speech, writing that “he has defied criticism of his new, conservative national constitution, his eradication of many checks and balances in the system, his appointment of allies to powerful institutions that were formerly independent, and his allegedly unfair new laws on elections, the media and other fields.

To bolster weak finances he nationalised private pensions, imposed tough taxes on sectors with strong foreign involvement, and boosted state involvement in an economy that has brought strong profits to politically loyal businessmen.

“He has also regularly lambasted the EU for meddling in Hungary’s affairs, and rallied support by depicting his government as defending the nation against venal foreign bankers and hostile bureaucrats,” The Irish Times’ Budapest correspondent recalled.

Hungary's PM: The Era Of Welfare States Is Over