Video Article: Hungary's PM Speech: The Era Of Welfare States Is Over 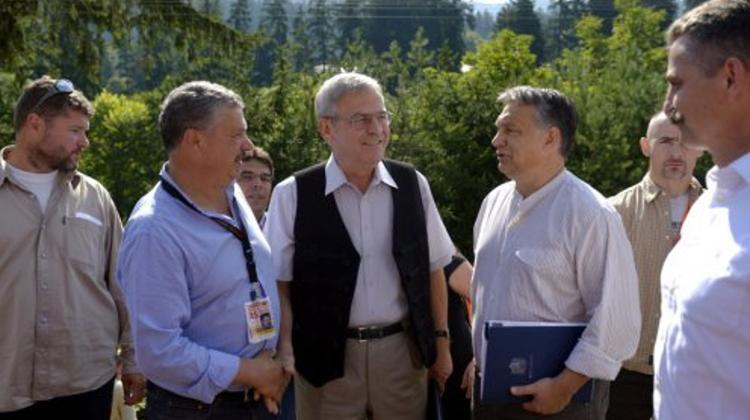 At the Bálványos Summer Free University and Student Camp, Prime Minister Viktor Orbán declared that liberalism is a system of ideals that has a tangible power for social organisation. If people want to change what they don’t like in the world, they must come forward with a similarly mature system of ideals, he added.

The welfare state and social system has used up all of its reserves. Today, it is consuming itself through accumulating huge debts and is not a sustainable way of existing for Western European societies. We should not follow this model, said the Prime Minister, according to whom “it is our duty” to freely reply to the question of what is the right course of action for the next 20-30 years. Provincialism is the copying of the West and it is something we should put behind us, because “it is killing us”, he added.

Mr. Orbán also said it had been self-agitation to state that we would be “swept into the clutches of the Russian bear”. Hungary is a member of NATO and the European Union, and our “biggest problem” is that two-thirds of our exports go to the EU, which is an unhealthy balance. What would be healthy is if this ratio was 50 percent and the other half went to the world’s various other regions so that we “stood on multiple legs”, he noted.

What is now happening with regard to relations between Russia and the Western world is very bad for Hungary, “it would be in our interests” if they did not lag behind western social development, he said.

Mr. Orbán also spoke about the fact that he does not agree with general US foreign policy, according to which the main goal is the proliferation of human rights. According to the Prime Minister, Hungary’s objective should be that every significant player of the world should have an interest in our being successful; this is what the Prime Minister regards as a national foreign policy. Concrete, practical and relation-based cooperation should be developed instead of listing principles of human rights, he said.

On the subject of the South Stream gas pipeline, he emphasised that Hungary is showing solidarity with the people of Ukraine and agrees that territory cannot be taken away from a country, in addition to which they are aware of the terrible economic conditions now prevailing in Ukraine. In the Prime Minister’s opinion, Russia would soon stop exporting gas to Ukraine because they will be unable to pay for it, and this means that the transport of gas to Europe would eventually be blocked. It is in the interests of Hungary that there should exist a method of gas transport that assures a steady supply even in a situation of this nature. We cannot throw our own interests aside in such a conflict, Mr. Orbán stressed.

The Prime Minister also declared that he is firmly against European policy that accepts and supports immigration. This must be stated firmly, clearly and calmly, he said, adding that he has so far been unable to make this an EU standpoint, because he is always voted down. According to Mr. Orbán, instead of financing immigration it would be a much wiser policy to help European ethnic groups who are currently not in possession of suitable training, but who are willing to work.

There will come a time when the ethnic basis of nation states will fall into question, he said, adding that “we do not want to turn Europe into a United States of America”.

On the subject of aspirations towards autonomy, he said that if the community in Transylvania ever found itself in a situation in which it did not receive the resources it was eligible for from the Romanian budget, it could count on the support of Hungary. The Hungarian economy is, however, currently incapable of replacing resources lost in this way. An important part of politics here (in Romania) is that it should be capable of acquiring the budgetary funding Transylvania has a right to.

He said he was “cautious” about taking sides with regard to discussions between political organisations in Transylvania; including such things in debates between either party is not in the interests of Hungary or of the people who live here. Autonomy is often also a question of financing in Western arguments on autonomy, he noted.

On Romanian-Hungarian relations, the Prime Minister emphasised that there had been no statement by the Hungarian Head of State over the past 18 to 24 months that had not shown the required respect towards the people of Romania and their leaders. The list of such statements by the Romanian party is rather long, however. According to Mr. Orbán, the key issues are respect and openness, and he promised to continue to show the Romanian people and their leaders the respect they deserve and to always be open to those issues that require discussion. This is the most we can do and we will continue to behave in this way, Mr. Orbán stressed.