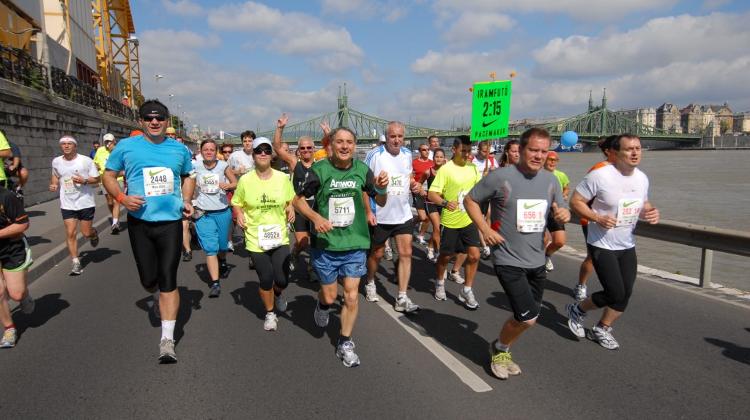 The first Budapest Half Marathon was organised in 1984. During the last 29 years the race grew up into a major event in Budapest with 12 850 runners. 8500 runners on the individual 21 km distance, while others run in pairs or run the shorter distances. Budapest Half Marathon also became a real international event with almost 1600 runners from abroad, from 65 different countries in 2013.

In spite of its physiological benefits the long distance running -however in a little measure- may be a danger. Important, that before a serious strain consult your doctor. Enter a race or an exhausting training only well-prepared. Do not enter a race or training in ill, injured or feverish condition, after vomit or diarrhoea. If you feel any unusual sign on yourself during running, slow down, stop, if it is needed ask for help. The above does not depend on the length of the distance, the meaning of the serious strain is individual. Be responsible for yourself, run sensibly!

registration number
Start package including: start number, sponge,
Chip measurment (except for the FunRun)
Medal at the end of the race (except for Fun Run)
Common warming up before the race with professional fitness trainers
Refreshment stations along the course (9 stations)
Pace makers
Changing and cloack rooms on the spot
First aid during the whole race
Family day at the starting area with different programs for all day long

The course is approved by AIMS (Assosiation of International Marathons and Distance Races). It is mostly flat, the only difference in heights are the driveways leading up and down from the bridges. The course guides the runners through the most beautiful parts of the city passing by famous buildings like the Opera House or the Parlamient, participants run along both sides of the city (Buda and Pest) along the river Danube.

The time limit is 2 hours and 30 minutes. The race will be followed by the closing bus which runners can get up on if they suffer an injury or are forced to give up. The closed roads will be opened after the time limit elapses, for this reason those who are caught up by the closing bus must get up on it. Runners who give up or suffer an injury will be transported back to the race centre by the bus. Please return your chip on the bus should this be the case. It is forbidden to keep on running once the bus passes you because roads will be opened to traffic after the time limit. Part time limits are:

• The start number must be worn during the whole race on the stomach/split split
chest area, while staying visible. (Start number holder belt can be used.)split split
• The chip placed at the back of the start number cannot be removed. Pleasesplit split
do not fold the start number, and do not stab the chip with the safety bins, and don’t cut your Start Number. If you do this you will not only get time penalty, but you will risk to ruin your chip and you will get no finishing time at all.split split
• 10 minutes time penalty can be given to the runner, who folds, cuts or wears the start number in a not visible way during the race. The runner can be disqualified from the race who keeps violate these rules despite of the organisers warnings. The runners who doesn’t finish the full distance of the race, or fulfilled the registration form with invalid data can be also disqualified from the race.

It is forbidden to participate in the race with skates, bicycles, dogs or other pets. Violation of these rules will result in exclusion from the race.

There is no refund for cancelation, no matter what is the reason behind. If due to injury you have to cancel the race, you can do it so before 5. September 2014, via e-mail to info@budapestmarathon.com. You will receive a credit in the value what you have payed for the race, what you can use any of our races until 31st December 2015.

Fair sportsman-like behaviour and other

Fair sportsman-like behaviour is expected of all participants, as well as always keeping to the marked route. The number of entries allowed will be limited upon decision of the organiser. Entry forms will be dealt within the order of their incoming. Early submission of the entry forms will guarantee your participation in the marathon.

All start numbers must be picked up at the race centre (at the start/finishing area in the City Park) during opening hours:

Starting times:
• 09:00- Half Marathon and Half Marathon in pair (Intermittent start will take place. Runners will be starting in 3 waves, according to their pace)
• 12:15 - Fun Run start (planned time)

Start places:
Start gate will be set up on Olof Palme Promenade (Olof Palme sétány) for all distances.

There will be pace makers who run at a stable speed to help amateurs better achieve their own planned time. Each time will have two runners assigned to,and they can be seen from a distance. Finishing times with pace makers:
• 1:30
• 1:45
• 2:00
• 2:15

There will be nine refreshment stations along the course, making sure that you acquire the necessary amount of liquid during the race. The first and last stations will provide water while the other stations will offer banana, lemon, glucose, isodrink and water. All stations will be supplying water to wet your sponge.

Toilets will be set up at the start/finish area and beside each refreshment stations.

First aid will be available from start to finish at multiple locations throughout the course. These are the following: doctors on motorcycles, an ambulance which will follow behind the race, another ambulance will be ready at the Lánchíd (Chain Bridge) in the relay switch area, doctors will constantly circle up and down the course, and finally a first aid station will be set up at the finish line.

The finish will be located on the Olof Palme promenade (Olof Palme sétány) Relay runners will have to enter a separate lane. All half- marathon and half-marathon in pair runners will receive a unique medal and a finisher bag upon crossing the finish line. The finish area is reserved only for runners and race staff - friends, relatives and other company may not enter this area. We ask all runners to return their chips to the race centre

You can get your medal graved with your name and time in the finishing area if you would like to.

Results can be viewed on www.budapestmarathon.com

*  Runners will be shown without ranking , who don’t have measured time in any of the check points during the course.
*  those runners who wear their start number irregularly will receive 10 minutes time penalty, added to their net time. Their names will be marked with a star in the result list.

8. Specifics About Half Marathon In Pairs

Distances are: 11,4 km for the first and 9,7 km for the second runner.
Relay point for Half Marathon in pairs will be placed at the Pest side of Lánchíd (Chain Bridge. You can get there from the start with the yellow subway till the end stop (Vörsömarty tér) and than a short walk to the Danube (5-10 minutes)