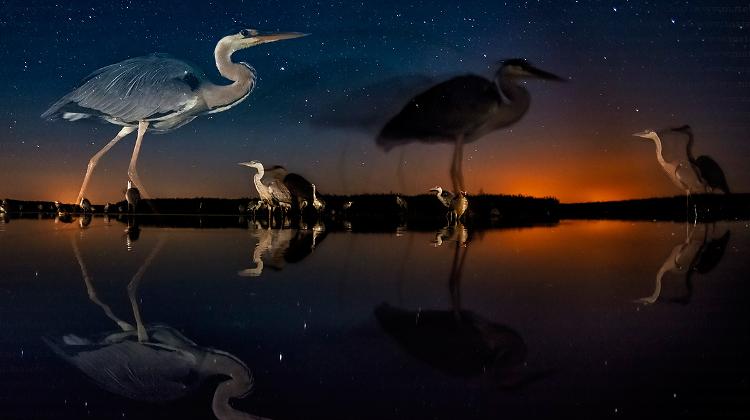 After being selected by an international panel of judges, on Tuesday night the winners of the fiftieth Wildlife Photographer of the Year Competition – co-owned by the Natural History Museum and BBC Worldwide – were announced. The awards ceremony was attended by the Duchess of Cambridge, patron of the Natural History Museum in London. The winner of the Birds category is Hungary’s Bence Máté with his image Herons in Time and Space.

Bence had set up his hide to overlook Lake Csaj in Kiskunság National Park, Hungary. He had a specific image in mind and had planned to use both artificial and natural light. His subject was the shy grey heron. To overcome the various technological challenges of a night-time shot, he had built two timing devices for his camera to execute the single exposure.

One device moved the focus, while the other adjusted the aperture within a single frame, so both the herons and the stars were in focus. It took 74 nights in the hide before the conditions were right and it all came together. The surface of the lake was still, reflecting the stars, and the sky was clear and motionless.

Just after midnight, the seven stars of the Plough (part of the Ursa Major constellation) slid into position above the glow of a distant town. Bence took the shot, with both the stars and herons sharp, but with traces of the birds’ movement leaving ghostly impressions against the sky. Blending technology and passion in a masterful manner, Bence had finally created a picture that he had planned for many years – of herons imprinting their images in time and space.

Bence Máté's images have been awarded four times in this category, but this is the first time he has won the 1st prize.

"This year I did not have a very strong collection, so I nearly skipped the BBC competition, but on the very last day I decided to give myself a chance at this jubilee competition, so I uploaded one single photo. I am so delighted that the jury recognized the speciality of this image, and its novel visual world was honoured with an award I have never won so far", said Bence Máté.

The Wildlife Photographer of the Year exhibition opens in October at the Natural History Museum, in London, and the top 100 images will also be showcased to millions of people when the exhibition is taken on its world tour. This will include the overall winning image by Michael ‘Nick’ Nichols from the USA and the Young Wildlife Photographer of the Year winning image by Carlos Perez Naval from Spain.

Allowing members of the public to get up close and personal with images of spectacular wildlife from around the world, the exhibition showcases the diversity and wonder of the natural world.