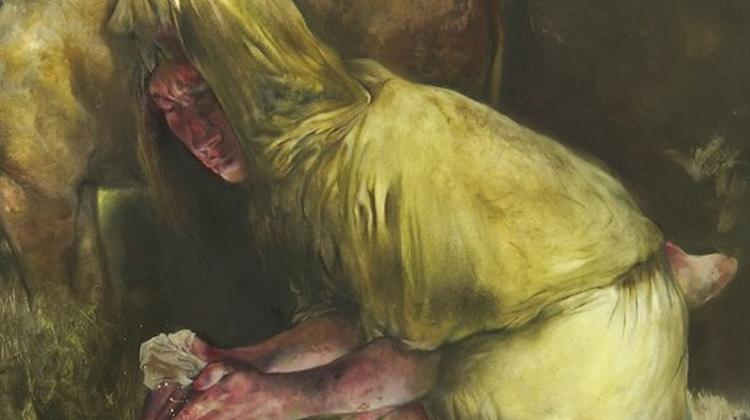 Budapest Art Factory (BAF) is pleased to present the solo exhibition of Sabina Sakoh (DE), who is represented by the Galerie Michael Schultz, Berlin, entitled Rien ne va plus. As the off-site VIP program of Art Market Budapest, a guided tour will be held with the participation of the artist on October 12. Sabina Sakoh is the guest artist in October, 2014.

In addition, the studios of permanent artists: Eszter Csurka, Márta Kucsora, Dóra Juhász, Levente Herman and Sándor Szász will be open to the public.

The role of Sabina Sakoh in the current scene of representational painting is of great significance. She combines design elements of antiquity, Gothic, Renaissance, Mannerism and of the 19th century in her grandiose, surreal canvases by converting the image ideas into the setting of the 21st century.

Her symbol-based imagery draws on the humanistic concepts of freedom, brotherhood and equality. While channeling her attention towards the political situation of the Federal Republic, Sakoh refuses to impose concrete political statements or to provide the viewer with instructions. However, by consciously shifting to figurative painting, she clearly articulates her opposition to the present art establishment, which in her opinion overestimates abstract and conceptual painting.

Sabina Sakoh was born in Munich in 1968. She currently lives and works in Munich and Berlin. Sakoh studied at the Academy of fine arts in Munich / Germany, under Professor Baschang. Between 1989-1992 she attended the German Master School for Fashion and Design.

Her artworks were exhibited in important centers of art in Germany, Austria and also in Beijing. Her pieces can be found in numerous art collections, such as the Dr. Guido Westerwelle, Berlin, Alison und Peter W. Klein, Eberdingen-Nussdorf, Gerling, Chicago. She is represented by the prestigious Galerie Michael Schultz, Berlin.

On view until October 31