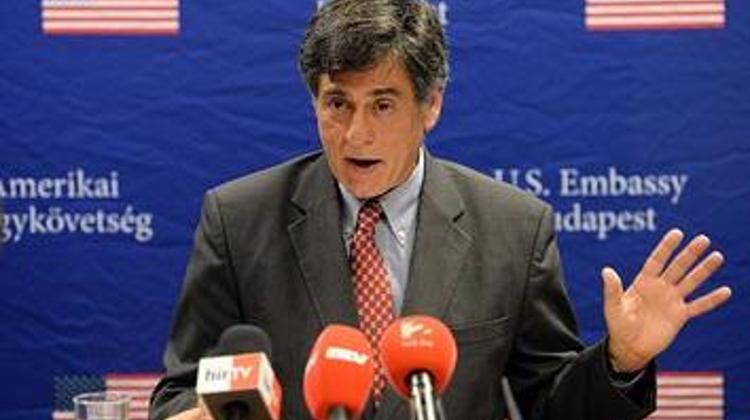 Let me summarize what we know so far about the U.S. action against certain Hungarian businessmen and government employees. Initially it was reported that ten people were banned from entering the United States, but by now that number has been reduced to six. We definitely know of one businessman who reported on his fate to ATV.

It was he who mentioned three employees of the Office of Taxation and Customs (NAV). One of the three was allegedly the president of NAV, Anikó Vida. The spokesman for the tax office did not deny the charge. If the number six is correct, there are still two people about whom we know nothing.

Although the Hungarian government feigns total ignorance of the details and keeps repeating that it is unable to move against the corrupt officials, in fact they have known for two weeks about the American resolve to pursue those Hungarians who have been trying to blackmail American firms and extort kickbacks of billions of forints from them.

M. André Goodfriend, chargé d’affaires of the U.S. Embassy in Budapest, sketched the timeline of events this afternoon. According to him, on October 6 he had a talk with Levente Magyar, one of the undersecretaries in the Ministry of Foreign Affairs and Trade. During the meeting Goodfriend explained the significance of Proclamation 7750, which is an executive order signed by George W. Bush in 2004.

The Proclamation gives the State Department power to ban corrupt individuals and their families from entering the United States. Such a ban can be imposed only by the undersecretary for political affairs–in our case by Wendy Sherman, who is the department’s fourth-ranking official. (Here is a handy chart of the structure of the State Department.)

Levente Magyar must have understood the gravity of the situation because a subsequent meeting was arranged at the request of the Hungarian foreign ministry between Péter Szijjártó and André Goodfriend. This meeting took place on October 13. The American chargé repeated everything he had already told Magyar. Szijjártó then insisted that he reveal the names of those would be affected by the ban. Goodfriend in turn explained that the American government never reveals names in cases connected to Proclamation 7750. What the U.S. expects is swift action against the culprits.

Let’s stop here for a minute. I assume that Viktor Orbán was notified immediately after the encounter between Magyar and Goodfriend on October 6, and I also suspect that the prime minister’s advice was to insist on “proof” from the Americans. When that failed, in typical Orbán fashion the decision was made to launch a counterattack.

NAV leaked information to Napi Gazdaság, a financial paper owned by Századvég, a consulting firm and think tank close to Fidesz, that the United States is contemplating evoking Proclamation 7750 against certain Hungarian businessmen in retaliation for NAV’s tax probes against certain American firms. If the Hungarian government hadn’t decided on this counterattack, we perhaps would never have found out about the travel ban on the six, still unnamed individuals. Colossally stupid move, but I think it is typical. Viktor Orbán always has to have the last word.

Since October 16, the day that Napi Gazdaság published its article containing the disinformation concocted by the Hungarian government, the controversy between the United States and Hungary has been escalating rapidly. The Hungarians kept insisting on “creditable proof” while the Americans steadfastly refused to fall into the trap.

Moreover, while at the beginning the controversy seemed to be connected only to widespread corruption in Hungary, as time went by it became obvious that the United States might also take action against the Orbán government’s increasingly anti-democratic behavior.

A day after the appearance of the accusations against American businesses in Napi Gazdaság, an article was published in Foreign Policy magazine from which we learned that “at a meeting last month, the Community [of Democracies] set in motion a process that could result in Hungary’s removal from the council and withdrawal from the Community. If Hungary leaves, it will be an international acknowledgment that the nation has ceased to be a democracy.”

What is the Community of Democracies? It is a global intergovernmental coalition of states founded in 2000 at the common initiative of Madeleine Albright and Polish foreign minister Bronislaw Geremek. The organization is headed by a Governing Council consisting of 26 countries, among them Hungary.

Apparently it was the United States that suggested that Hungary be removed from the Council and perhaps even from the organization. Or perhaps Hungary might consider a voluntary withdrawal from the Community in order to avoid embarrassment. The likelihood of an American initiative in this case was reinforced by André Goodfriend’s observation that such a move might be warranted under the circumstances.

Perhaps the strongest language could be heard this afternoon when Goodfriend explained the reason for American action. In Hungary prior to 2010 the level of democracy and transparency, especially in comparison to some other post-socialist countries, was high.

But while in other countries the trend is toward greater democracy and transparency, in Hungary the opposite is true. “If that trend continues it may reach a level where the United States can no longer cooperate with Hungary as an ally.” Clearly, the United States is not joking–as Antal Rogán assumed only yesterday during an interview.

Let’s return briefly to the three high officials of the Hungarian tax office who most likely are implicated in the case. In what way can they engage in fraud and corruption? Here is an explanation offered by Dávid Jancsics, who is currently conducting research at the City University of New York. His expertise is corruption. He learned from two independent sources that the NAV employees demanded kickbacks from two American companies in exchange for tax breaks and a lower VAT.

Apparently they demanded 2 billion forints in exchange for these favors, money that the American companies were supposed to pay to a foundation associated with Fidesz for purposes of “research and analysis.” In addition, the NAV officials promised heavy fines on the American firms’ competitors. When the Americans didn’t bite, the NAV officials began threatening them with tax probes. It was at this point that the firms turned to the American embassy and reported the bribery attempts. The implication of this analysis, if it is accurate, is frightening because in this case the tax office is part and parcel of a corruption scheme that appears to be centrally organized.

This takes us back to an old story about a whistleblower at NAV who claimed that high NAV officials refused to investigate obvious fraud cases. András Horváth, the whistleblower, said that he was mostly involved in investigating companies that dealt in agricultural products. Index came to the conclusion that one of the two American companies in question was Bunge, a leading agribusiness and food company. It is a global firm with 35,000 employees in forty countries, including Hungary.

They produce among many other things cooking oil sold in Hungary under the label Vénusz. It was well known that the management of Bunge was very unhappy about the VAT fraud and that their efforts to enlist the help of NAV were fruitless. It is possible that after a lot of complaints from the Bunge management NAV officials offered to do something about the competition’s fraudulent business practices but only at a price.

Hungarian journalists in the last few days have asked several business groups, like the German-Hungarian Chamber of Commerce, about the extent of corruption in Hungary. The answer is that foreign companies have known for years about corruption involving billions. “Hungary is a part of the Balkans” by now, and the situation is only becoming worse. According to foreign business leaders, Hungarian business life is corrupt through and through. Healthy competition is impossible under such circumstances.

Péter Szijjártó is leaving Budapest for Washington tomorrow to meet Victoria Nuland. I wouldn’t like to be in his shoes.