Budapest English Theatre: Great Plays In English, But Not Only For Expats 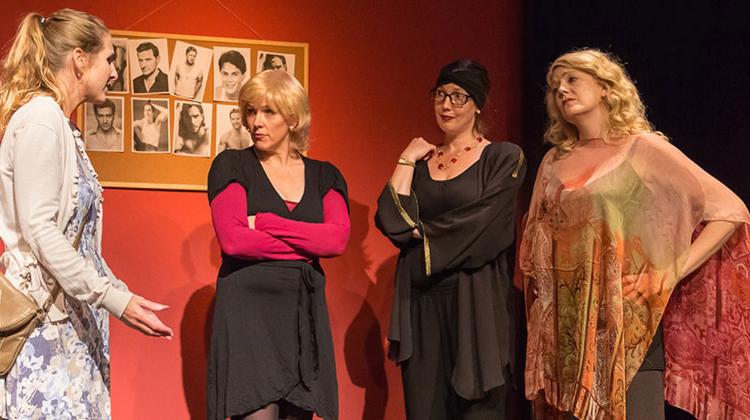 Budapest is a great place to live if you love theatre. Most of the productions are in Hungarian, but fortunately there are also more and more shows in English. One great example is Budapest English Theatre‘s new comedy, called Pretext, written and directed by Virginia Proud.

The play premiered earlier in October and it was a great success with three sold-out performances. Two additional dates have just been announced for November 14th and 23rd (scroll down for the details). I asked Virginia, who is also the Artistic Director and Producer of Budapest English Theatre, about the story of the company as well as about her experiences as an expat living in Budapest.

How did you end up living in Budapest?

Before I moved to Budapest, I lived in Istanbul for two years. Istanbul is an amazing city and it was an incredible experience, but after two years, I needed a break from the noise and stress. I was on holiday in Budapest and I absolutely loved the city; the architecture and the river reminded me of Paris, but seemed a bit grittier, a bit more authentic. I found so many things here that I also loved about Paris when I lived there, so I decided to come and see how I liked it, and fell in love with the place. That was three years ago.

Are you planning on staying in Budapest?

I’d love to stay, I am very happy here and I don’t want to go through the process of moving again, but who knows what will happen? I’ve lived in a lot of different cities now and there is a certain freedom that comes with knowing no matter where you end up – you may not speak the language, you may not understand the culture – but you will be able to figure out how to survive. And I think once you have that confidence, you can go anywhere.

How did you come up with the idea of founding a theatre group in Budapest?

I am a writer with a theatre background, but initially when I arrived here, writing was my sole focus. I wasn’t thinking or planning on getting involved in theatre, but I felt that there was not enough good stuff going on in English and maybe I could do something. It was a kind of serendipity, because at exactly that time, I met three other expats who were feeling the same and so we decided to collaborate and create a group that brought together English speaking actors, writers and directors to work on theatre projects.

Who is your audience?

If you’re serious, that is what you have to decide. Who is my audience? When we produce a new play, one I’ve written or something by another playwright, then obviously we market to the expat community, but to call it expat theatre, immediately limits our audience. Just because we’re making theatre in English, I don’t expect every English speaking expat in Budapest to turn up.

If they wouldn’t go to the theatre at home, if they’d rather be down at the pub watching football, then that’s where they’re going to be. So we looked for a broader audience and found it’s actually quite easy to underestimate how many people here are fluent in English, love theatre and want to see a play in the original language. We get a lot of Hungarians in the audience. Some of our most loyal audience members, who come to every show, are Hungarians. But it creates an extra pressure because they have the option of seeing a great local Hungarian production. I’m saying, choose us. So it has to be good.

How do you decide which plays to put on?

Doing theatre in a foreign environment does influence what plays we choose. Personally I love quite experimental pieces, but we have to work with the constraints of what we’re capable of producing and the experience of our actors. And some pieces can be quite difficult if the language is too nuanced. Generally I’m looking for work that deals with issues that are easily recognized in any culture.

How many plays do you have in a season?

It’s been three or four, but it’s really just a question of good material, resources and people’s time and availability.

Tell me a little bit about Budapest English Theatre.

The original group has changed, people have left Budapest, or moved on to other things. There might be a different cast and crew for each production, depending on who is available and what we need. It’s a very fluid thing! But the joining force is that we love the theatre, and want to make the shows happen. There are great sacrifices in terms of time and energy, and in exchange people get different things out of it. Above all, we want to use and develop our skills, some people want the opportunity to work in English, and some just enjoy the process. I guess I do most of the day to day organising. Someone has to!

What are the main challenges that the company is facing now?

One of the biggest challenges is that we don’t have a home theatre and so we are always struggling with finding venues and scheduling dates. For example with Pretext, to perform four shows, we had to use three different venues, dealing with three different technical and stage set ups. And we are also limited because every show has to pay for itself. My real dream though, is to have a permanent rehearsal space, somewhere we could store props and costumes and maybe even a workspace. That’s probably the next step for us, finding a home.

Do you speak Hungarian?

I studied Hungarian when I came here. I went to Balassi Intézet where I did an intensive course. I understand a lot more than I used to for sure, and if I know the context I can often follow things, but I’m a nervous speaker. And to my shame, I don’t practice it regularly. But I really like Hungarian, it’s a very interesting language. I love the structure of it and I’m fascinated by the sound of it. Turkish has the same agglutinative structure and I managed that OK when I lived in Istanbul, so I don’t struggle with the concept of the suffixes and prefixes in Hungarian.

My problem is my terrible vocabulary. It’s all very functional; my “bar”,“restaurant” and “café” vocabularies are really good and my “theatre” Hungarian is not so bad either. I wish my Hungarian were better because it does limit my ability to make friends. Even when I’m with my Hungarian friends, we’re always in an English-speaking environment, so it’s like people have to come towards my culture instead of me being able to go towards theirs. And where I really feel I’m limited is going to theatre.

There are so many productions and some really experimental stuff and I would love to be able to see these. I still go to shows although I don’t have a clue what’s going on. At least because I’m a director what I’m often taking away from the show are the technical aspects. So I’m always gaining something from it, but I can’t enjoy it the same way obviously.

Do you find it easy to live in Budapest as an expat? Do you feel limited because of not being fluent in Hungarian?

Also, my family was in Hong Kong for a long time and didn’t speak any Cantonese, although it was easy there with English. But you know, that’s what you learn when you move to a new city, that you shouldn’t be stressed about the unfamiliar. And with technology, it’s getting easier and easier. For example, Budapest has the most amazing public transport. Without wanting to be a Google fanatic, when I first got here I used Maps all the time. Put in one address and then the other and click public transport, and it tells you exactly what to take, where, it’s amazing and it’s impossible to get lost. And Google Translate helps me navigate those supermarket labels. There’s always a way to figure it out.

Where do you go out usually?

Since I arrived in 2011, the city has changed a lot, there is so much now, it’s impossible to choose. And each district has a different vibe. Sometimes I find that I’m spending three or four nights of the week in the 7th or 8th district. Kis Üzem is a favourite, or one of the places around Mikszáth Kálmán tér.

Then I’m not in the mood for that anymore, so I head into the 5th or the 13th for a completely different atmosphere. The Kerts are also amazing and unique to Budapest, Kertem in City Park is a favourite, incredible burgers. I avoid Kazinczy Street and Gozsdu Court because it’s jam-packed every night of the week and I prefer more quiet places where I can actually relax and talk to my friends.

My comfort zone is probably Café Zsivágó for coffee or drinks, and there is a great little café close to my flat called Matinée.