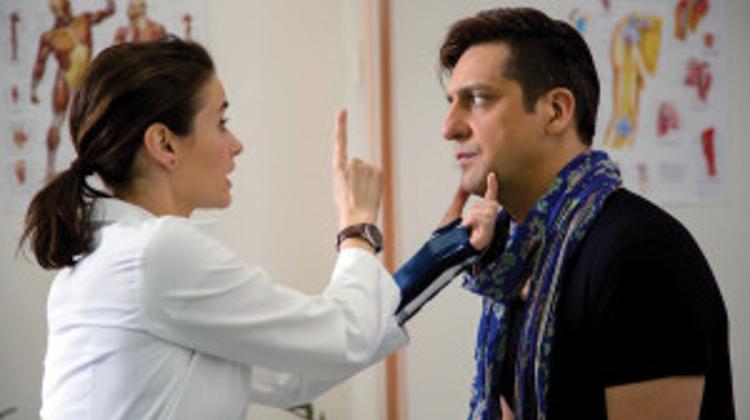 Celebrating its 14th year, the Hungarian Film Festival of Los Angeles begins November 14th until November 20th. Its founder and the head of Bunyik Enterprises, Bela Bunyik, discusses how the festival started and what audiences can expect at this year’s festival.

Opening the festival this year will be the romantic comedy “Coming Out” (2013) starring Sandor Csanyi about an openly gay celebrity, who fights for gay rights and discovers something new about himself along the way. Bunyik called it “the most successful comedy of the year in Hungary”. It’s star will be in attendance as will other filmmakers as well as the Hungarian Secretary of Culture, who will open the festival.

Sandor Csanyi is one of the most popular leading men in Hungary having starred in the romantic comedy “Just Sex and Nothing Else (Csak Sex es mas Semmi)” (2005) , “Children of Glory (Szabadsag, Szerelem)” (2006) inspired by the Hungarian Revolution of 1956 and “Kontroll” (2003) which gave many American audiences their first opportunity to see him.

The Hungarian born filmmaker, Peter Medak, known for American films such as the horror classic, “The Changeling” (1980) with George C. Scott and “The Ruling Class” (1972) with Peter O’ Toole, who was nominated for an Academy Award for best actor, will receive a Lifetime Achievement Award. In honor of the award “The Ruling Class” will also be screened.

“My intention is to make the festival as colorful as possible” declares Bunyik, who as a guest every year at the Hungarian Film Week (the most important national film festival in Hungary since 1965), has the opportunity to see newly released films. “Our festival never has an agenda” he says “it is open to all entertainment” and so every year feature length films are showcased as well as documentaries, short films and animated movies.

Other screenings at this year’s festival include “Heavenly Shift (Isteni Muszak)” (2013) the first feature film from director Mark Bodzsar. The movie follows the lives of an ambulance crew. The movie has competed at various festivals including Warsaw, Luxembourg and Brussels. Then there is “Aura” (2014), the story of four kids who mysteriously wake up in an abandoned field to find the sun did not rise. This sci-fi feature was directed by Zsolt Bernath.

The origins of the festival began when Bunyik Enterprises, which was already a distributor of Hungarian films in the U.S. and Canada, brought Robert Koltai’s “We Never Die (Sose Halunk Meg)” (1993) to the States and the movie met sell out crowds at the Laemmle Theater (home of the Hungarian Film Festival and various other festivals). As a result Buynik thought American audiences might be interested to discover more about Hungarian cinema.

And that is the goal of the festival, to introduce American audiences to the “superb talent that Hungary has to offer in the film making industry” Bunyik says. Every year more and more non-Hungarians attend the festival as Bunyik thinks audiences like to “see how other countries make films” and adds, “film students seem particularly interested in attending.”

The festival proved to be an instant success thanks largely to the early support of the Los Angeles Times movie critic Kevin Thomas and since that time it has grown beyond Los Angeles as there is now a Hungarian Film Festival in San Francisco too, which will begin its third year. It is all a “very pleasant surprise” says Bunyik.

Bela Bunyik was born in Budapest, Hungary and says he has always been a movie buff. His favorite movie is the classic “Somewhere in Europe (Valahol Europaban)” (1948). He started Bunyik Enterprise when he “saw an opportunity to bring Hungarian films to America when VHS stores started to open up”. Currently Bunyik Enterprise does not release DVDs but there are plans to open an On Demand store.

Alex Udvary is a Chicago based freelance movie critic and commentator. All of his work can be read at alex-udvary.blogspot.com