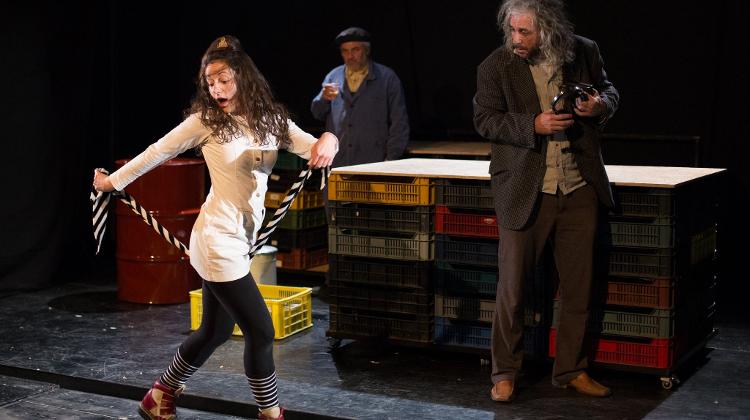 Focus 1: International Conference and Workshops on 5th and 6th December. On December 5, the Heinrich-Böll-Stiftung, in co-operation with the CDF, is holding an international conference accompanied by workshops, as a professional programme of the festival, in Jurányi Art Incubator House, titled Culture for Free? The Theatre of Hope? Myth and reality.

The two day conference consists of 4 parts. On December the 5th there are two panels with international participants. In the afternoon there will be a workshop held by Ulf Schmidt and on the 6th of December the Lifeboat Unit of Sputnik Shipping Company will held its performance presentation accompanied by a workshop.

The participation is free on every event of the conference; registration is required.

Please register  by clicking here and refer to the conference and/or the number of the workshop you would like to attend).

Due to the big success last year, we are going to organize the Industry Series this year, too. This year, the festival also gives an opportunity to those theatre makers, whose works have been mentioned by the jury in the selection process as contenders, but have not become a part of the final line-up of the Hungarian Showcase, to present their performances in the framework of presentations to the foreign guests of the festival.

This way, new relationships and collaborations might set off between Hungarian and international theatres and companies. Here you can see:

The k2 Theatre who is going to present their adaptation of The Good Person of Szechwan by Bertolt Brecht titled Before Night Falls!

STEREO Akt, led by Martin Boross, is going to present its performance Before You Die; this company is specializing in creating diverse, event-and site-specific artistic productions according to the needs of the production.

Troyka Theatre Company, founded by Attila Soós, they are going to present their performance based on Georg Büchner’s Lenz, which was selected into the original line-up of CDF 2014 by the jury, but could not be performed due to disposition problems. These 20-minute long presentations are followed by a workshop accompanied by a presentation.

The Contemporary Drama Festival Budapest was created in 1997 with the aim to facilitate cooperation and dialogue between Hungarian and international theatre professionals. The main goal of the organizers has not changed since the very beginning: to promote Hungarian theatre on an international market and to give professionals a chance to meet each other, and to possibly invite Hungarian theatres to introduce themselves abroad, allowing the creation of co-productions and long-term collaborations.

This year we are expecting 22 theatre professionals (theatre critics, theatrologists, artistic directors, dramaturges and curators, artistic directors from theatre festivals) as our guests, who have the possibility and opportunity to see the performances selected by our Festival Jury with English surtitles or simultaneous English translation.

Parallel is a coproduction between Hungarian and Romanian artists. It is the work of a temporarily formed group. The concept and the choreography are designed by Ferenc Sinkó; his codirector is Leta Popescu, a freshly graduated director from Cluj.

The music of the performance is composed by danaga, a DJ from Cluj, who debuted with his first record in 2013. Parallel is based on experiences of performers Lucia Mărneanu and katabodoki-halmen (sic!).

Created from the proposals of the performers and written by the entire team, the show provokes by its direct approach towards themes like body, sexual identity, repression and acceptance. Movingbodies, drag show as well as original songs by katabodoki-halmen together with live mixed music by danaga create a dynamic and penetrating performance.

Slovakian performance artist-director Sláva Daubnerová’s performance Untitled was inspired by photographs made by an American photographer with a tragic fate; its theme is transiency. Visual solo performance, inspired by work of Francesca Woodman* and the sensation of impermanence evoked by photography. With photography, we observe something already gone, and what hurts us about this is the suggestion of our own mortality. As Roland Barthes had put it, we “shudder over a catastrophe which has already occurred. We are already dying within our life.” Miroslav Petříček

The basis of the festival is made out of the theatre performances reflecting on and reacting to our present, made either in city theatres, or in independent workshops. When we take a look at the directors, we could find not only the already world-wide acclaimed ones, but also the ones who have just entered the Hungarian theatre scene. Among the productions, there are going to be Hungarian performances, two foreign performances of Hungarian concern, and even a foreign guest performance.

You have the opportunity to see performances like: The Government Inspector, directed by Viktor Bodó, shows the nature of corruption, adapting the original play to the current Hungarian situation. Emma Bovary (played by Emőke Kiss-Végh) is telling a story about the mindset of a married woman.

Foam of the Days, by the University of Theatre and Film Arts, goes against the Hungarian theatre traditions, with the use of cartoon like elements, pop cult references it speaks about really important questions concerning the youth. No Place for the Likes of You, performance of the Mohácsi brothers, compels us to remember the victims of World War II. Forte Company asks questions about tolerance in their performance The Clearing.

Diary of the Guy at the Deli Counter is a fantastic puppet-monodrama performed by András Ötvös; it is about love, rigidness, life and dead meat. Anybodyanytime, the new production by Béla Pinter, presents us the designer drug called LIFE. The young creators of Citizenship confront their audience with the shortcomings of their order of values.

Concert-theatre piece Hungary, created by Péter Kárpáti, discusses the topic of immigration based on chat logs and blog posts. Long Day’s Journey into Night, Sándor Zsótér’s performance in Kecskemét, shows us the deterioration of a seemingly idyllic American family - in a manner that is really familiar to us. Slovakian performance artist-director Sláva Daubnerová’s performance Untitled was inspired by photographs made by an American photographer with a tragic fate; its theme is transiency.