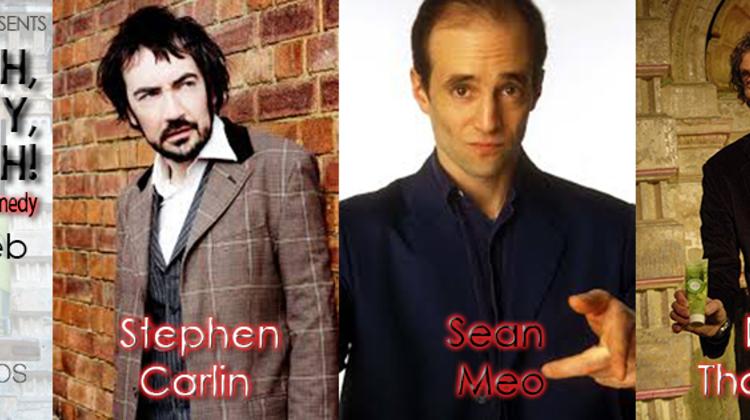 On Wednesday 4 of February, Brody Studios features the eighth in the series of English comedy nights hosted by Dave Thompson, best known as a brilliant one-liner writer and performer in Harry Hill’s TV Burp, and former Tinky Winky from ‘Teletubbies’.

Our eighth comedy night features two international stars: Sean Meo and Stephen Carlin. Former Time Out Comedian of The Year (1998), Sean is widely acknowledged as one of the finest performers and writers on the UK comedy circuit. A former professional snooker player, he turned to a career in comedy in 1989.

He has performed all over the world and made three appearances at the Montreal Comedy Festival (2003/2001/1998). Other festival appearances include Melbourne, New Zealand, Kilkenny, Edinburgh, Singapore, South Africa and Manchester.

Carlin has earned critical acclaim, accolades and a growing fan base with his original and insightful writing style and accomplished delivery. He is a very enigmatic act, using a unique pattern of delivery to amuse the audience with unexpected and off the wall references.

From his sartorial elegance to his in-depth and hilarious knowledge of International snooker, Carlin’s performance takes the audience into the mind of a passionate obsessive. This man is well on his way to become Scotland's newest addition to its history of brilliant comedians.

Tickets must be purchased in advance – contact  with all enquiries  by clicking here
2.500 HUF per person for members | 3.500 HUF for non-members