Hungarian Protesters To Merkel: We Are Drowning In Corruption 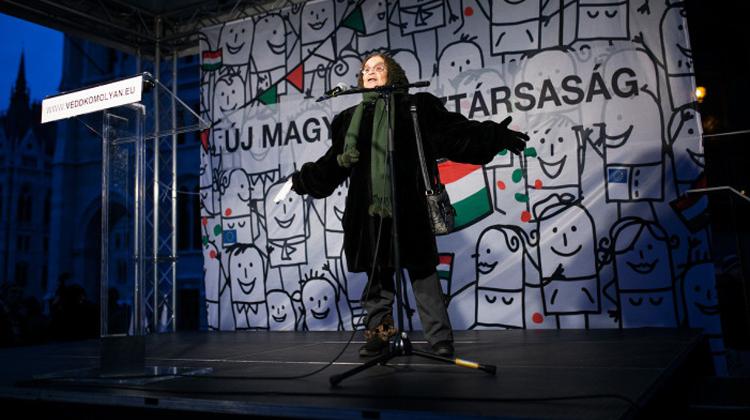 Several thousand Hungarian protesters gathered in Budapest’s Kossuth square this evening to demonstrate against the government of Prime Minister Viktor Orbán and to call on German Chancellor Angela Merkel to stand up for European values.

The demonstration was preceded by an interesting performance. An area in front of parliament was roped off with yellow “Crime scene do not cross” ribbons. Activists dressed in white protective clothing paced back and forth in front of it. Then each activist opened an umbrella, each bearing a different message. The crowd enthusiastically applauded the performance.

Demonstration organizer Balázs Gulyás opened the event by leading the crowd in singing the national anthem. He then delivered a speech in which he humorously observed that the government had retreated on a number of issues, and for this reason Angela Merkel needn’t purchase a vignette to use the few hundred meters of highway connecting the airport to the city of Budapest. He also pointed out that while the government spends huge money on the purchase of vehicles for government officials, every fourth ambulance is more than 13 years old. He greeted the many protesters in other parts of Hungary and abroad.

He asked the protesters to contribute towards the cost of the demonstration and mentioned Antal Rogán’s claim that such demonstrations cost ten million forints (USD 37,000). Lifting an imitation Louis Vuitton bag, Gulyás said “Antal, a demonstration like this would only cost ten million if we filled the stage with half million forint designer bags.” Protesters were invited to deposit their donation in a cardboard box labeled “donations” to which someone had added the name “Gucci”.

Gulyás then reminded the crowd that on this day in 1946 Hungary had proclaimed itself a Republic in order to “put an end to Soviet influence whose brute force was based on a network of KGB informers. Today, however, a former KGB officer is running Russia using the same methods. Viktor Orbán is making our homeland dependent on this former KGB officer” said Gulyás.

He then tried to confront the Prime Minister with the Viktor Orbán of 1989 and 1998. He said the Prime Minister was “difficult to defeat,” and that for this reason it was first necessary to “break his two-thirds parliamentary majority,” for which there was “every opportunity.” He then introduced Zoltán Kész, independent opposition candidate for parliament in the by-election scheduled to take place in Veszprém three weeks from now, whose victory would mean the end of Fidesz’s parliamentary supermajority.

After briefly introducing himself, Kész told the crowd that “Hungary’s ability to bring an end to 5 years of humiliation” was riding on the outcome of the by-election. “So far we’ve paid these Fidesz politicians, but some they are going to be the ones who pay.” He said “we cannot allow the interwoven dreams of our grandparents and our parents to fade away, and we will not allow our children to spend their lives the slaves of some families.” He said the country was awash in “fear and loathing” and that “only a few corruption people kept the Orbán system alive.” He mentioned attorney general Peter Polt and NAV president Ildiko Vida as examples of those supporting the system.”

“Tomorrow the German Chancellor arrives to our country, but it is not her job to send Orbán away, but first the people of Veszprém must do so on February 22nd. They will send the message that there is hope because Hungary has finally come to its senses” Kész told the crowd. He then said he forgave the journalists who had participated in a campaign to discredit him over the past few days because they, too, are afraid, like everyone else. “We have to build a new country because of them and for them!”

He was followed by Sándor Székely, president of the Hungarian Solidarity Movement. The crowd started chanting “Orbán scram!”

Székely spoke of the need to do away with the Orbán system, but that for this everybody needed to engage in politics. “Today in Hungary everybody lies” he told the crowd. “The government lies, but the political opposition doesn’t tell the truth either. Nor do those who organize and blog while claiming they are not engaging in politics.” Székely said that everyone who came to the demonstration was politicizing, and that this was good.

“This is how we can defeat Viktor Orbán. We trap ourselves when we say things will be better later, things will be better for our children, and that we will have pensions.” Székely told the crowd “nothing will be better for anyone if we remain silent. They will continue to take us in everything, just as they have in the past. And for this reason we must not lie to ourselves anymore. Now is the time to take matters into our hands and to start politicizing. We should not only speak our minds in the pubs but in the street as well” he said.

He then introduced philosopher Ágnes Heller as the one who demonstrated for Democracy in 1956 in the Kossuth square. Heller was received with thunderous applause. Heller began her speech by saying that everybody who was present wanted a normal Hungary, but that for this certain things were necessary. “Let us demand media freedom, academic freedom, rule of law, equality in the eyes of the law, freedom of religion, freedom to strike, a revision of the labor code, the integration of minorities, just tax policies, an end to the cycle of poverty, respect for youth, and indubitable attachment to Europe. Let us demand a knowledge based society, because there is only work and success on the basis of knowledge” she told the crowd.

“Every dictatorship survives when the country’s inhabitants do not involve themselves in politics, saving their complaints for the pub, and do nothing to alter their fate. This is why it is necessary to politicize the country: let us confer, discuss, because the fate of the country depends on us. This is what the Hungarian nation wants” said the philosopher.

Heller was followed by media researcher Ferenc Hammer, who told the crowd that the key to exercising power in Hungary was the free press, and that RTL Klub had proven this. “Every bad news from (the Prime minister’s home town of) Felcsút costs Fidesz 1 percent”. When the German RTL leaders negotiate with the government, don’t think of a free press, but of their dignity. Hammer spoke about the vulnerable elderly people, the youth excluded from the possibility of studying, central bank government Matolcsy, the Paks atomic energy plant, state lands, road construction, and the dissipation of Hungary’s future. For this reason today every opposition force must keep one thought in their head: How can we free ourselves form this disaster? Hammer believes that today this is the primary democratic goal, and called on the opposition to be “deceitful and devious.” “Be politicians!”

Budapest 16th district assemblyman Zoltán Vajda (Together) was the last to take the stage. He started off by talking the crowd “Don’t think that it is the job of the EU or Angela Merkel to liberate us from this disease. That is our responsibility, and we will do it.” At this point the crowd began chanting “Orbán scram!”.

Vajda then talked about the kind of Europe that we need. “Not the kind where the people live in fear, but the kind where the possibility doesn’t even arise that they would nationalize private pension funds or deprive anyone of private property. Vajda reminded Merkel that, while getting rid of Orbán was not her responsibility, the European Peoples Party (EPP) bears responsibility. “For this reason we expect them to not to turn a blind eye to Orbán and his mafia government, but rather hold it to account for European values.”

Vajda then asked Merkel whether she would undertake the measures that Orban had. “Madam Chanceller! Do you and the members of your government steal?”

Vajda reminded the German Chanceller that thousands of billions of EU grants were circulating in Hungary, a large part of which was paid for by German taxpayers. From this money it is possible to make worthwhile projects, “but it is also possible to simply steal it.” The crowd started chanting “to prison.” “This is not a joke, we are drowning in corruption” he continued. Crimes which affect us affect European citizens. For this reason we expect three things from the EU: That it insist on transparency in public tenders, that it create a EU attorney general’s office to prosecute abuses of EU monies, and that it strengthen the European Court of Human Rights. He asked Merkel not to forget that Hungary is not the same as Orbán. “We are the people” he said. But he noted that “we also have expectations of ourselves.”

He said that everyone there had a common goal: that there can once again be a Republic. “There is hope, there is strength, and there is a goal.” More and more say that this cannot continue, and we have Orbán to thank for that. “What ties us together is that we are honest, brave people who want Hungary’s happiness,” said Vajda, before telling the crowd “you are the real patriots.”

Everybody must do their part, said Vajda, adding that they would continue to exercise pressure and that they would leave no matter untouched. They would organize more and more demonstrations, because “this is only the beginning.” Change can only start with individuals, and for this reason “do what you can do.” He said the organizers would provide help and invited the protesters to contact them and to visit the www.veddkomolyan.eu website after the demonstration, where everybody could learn what they could do for the common goal. Vajda concluded his speech by announcing that the next demonstration would be held on March 15th.

The demonstration concluded with a singing of the European anthem, Beethoven’s “Ode to Joy”.