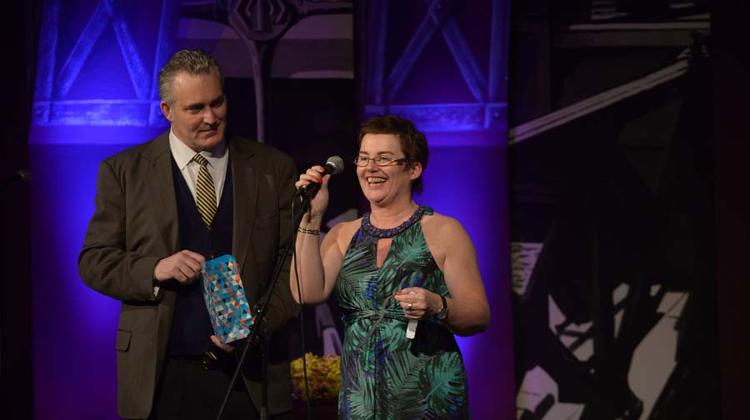 By Mary Murphy (who deserves so much credit for this whole GOTG thing - ed). A stellar performance last Thursday night was witnessed by hundreds of Xpats (expats and internationally minded Hungarians). The final of the 2015 Gift of the Gab, and the final in the five-year series, brought a new standard to the stage. The five finallists, having made their way through their qualifying rounds, gave the audience a night to remember. Important to note, GOTG will be back in September with the final final to pit the five finallists from the five years against each other to see who takes the overall title.

First up last week, Stephen Collison, gave his reasons for always wearing sensible underwear; reasons that involved lipstick-kissed briefs, dragon aunts, and closets. Dónal O'Neill elicited bucket-loads of empathy as he recounted his efforts to learn the mouth organ and clarified the age-old confusion about the missionary position. Miklos Morandini, in what was the cleverest GOTG speech since Gretchen Meddaugh's wonderful Six Degrees of Kevin Bacon, talked about replacing our idolatry of sports with science. Think heart-transplant relay. Jennifer Walker regaled us with stories of her recent travels in India spiced with curried pizzas. And finally, Gerard Lucey introduced us to the concept of manopause. Next time you pass him in traffic, check out the rolex draped around the steering wheel.

* With all to play for and the crowd in fine form, the impromptu round didn't disappoint. Miklos picked two topics straight off: When life gives you lemons, you make lemonade; what do you do when life gives you cheese? and Facebook or Twitter. Not surprisingly, the audience vote for the latter was a resounding silence. Turns out, Miklos is the cheese in our lives and it's up to us to decide what to do with him.

* Steve took the opposite approach resolving to do whatever topic he pulled first: My best friend's worst fault. He blames Hans Peterson for being too encouraging and landing him on stage at GOTG.

* Not satisfied with Ideas are your greatest weapon, Dónal went for a second pick, one the audience fancied, too: The judges. He cleverly kept his sycophancy at bay until the end as he first took us on a tour of his aspirations to be a Supreme Court Judge.

* Having already talked about her trip to India, Jennifer (and the audience) said no to My funniest trip abroad and instead tackled I wish to be a spider. Who knew how great life would be if we had eight hands or legs and a family who didn't have the same attitude as Gregor Samsa's in Kafka's The Metamorphisis.

* Last up, Gerard's pick Culture is not a luxury but a necessity was received by silence as the audience went for Hot flatmates. If you remember Gerard's great qualifying speech about the man he met on his trip to Croatia, it wasn't at all surprising that he'd opt to share a flat with a hot guy sooner than a hot girl.

The judges - Kevin, Viki, Judy, Mark, and Gordon - did their job. The winner of the 2015 Gift of the Gab is Jennifer Deborah Walker.

The night was a great success with many sponsors contributing to the raffle. Viking Services led the way with a 100 000 ft voucher for Knrdy Restaurant. The top prize in the raffle - dinner for two at the Michelin-starred Costes - was donated by XpatLoop.com. And other sponsors included New Orleans, Jack Doyle's, The Caledonia, Becketts, Little Britain, Liquid Gold (Guinness), the Burns Foundation, The Embassy of Ireland, Moszar Café, and Interelocations.

A massive thanks to all the speakers who have taken part this year; to the judges who have engaged so enthusiastically; and to you, the audience for supporting the cause.

A particular thanks to Zsuzsa Bozo for organising the final night and to Kath (tickets), Ilcsi and Zsuzsa (mics), Steve and Debbie (photos), and the inimitable Steve Saracco, who gamely stood in for the absent Jeremy Wheeler. Thanks, too, to The Jookers for keeping the party going with their fantastic music.