Tree Planting In Budapest In Honor Of Earth Day 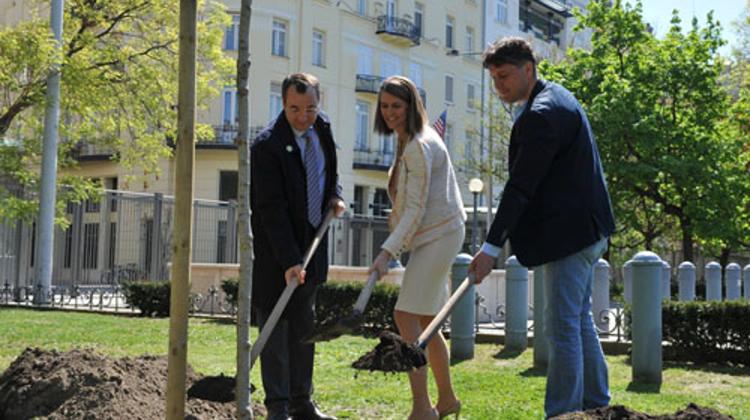 Remarks Ambassador Colleen Bell at the Tree Planting in Honor of Earth Day:

It is a pleasure to be here today to plant this Magnolia tree with the Mayor of the Fifth District and the Provost and Pro-Rector of Central European University to mark the 45th anniversary of Earth Day. The Embassy has been a part of the Fifth District community for 80 years. We are grateful for the friendship and hospitality of the Hungarian people and of all our neighbors in this District. This tree is a symbol of that friendship.

In the United States and throughout the world, Earth Day has become an important occasion to remind us of the necessity of clean air, water, and soil to nurture healthy living and promote vibrant communities. The Embassy family is grateful to work in a beautiful park that is of historical significance. We appreciate the fact that two American leaders are honored in this square. First, Major General Harry Hill Bandholtz, who was the U.S. representative of the Inter-Allied Military Mission in Hungary in 1919, was recognized in 1936 and again in 2003 for stopping invading troops during the First World War from looting the Hungarian National Museum. And second, former President Ronald Reagan was recognized in 2011 for his steadfast opposition to communism.

We also value the partnership we have built with Hungary during the previous 25 years through our joint efforts to establish and support the Regional Environmental Center for Central and Eastern Europe. The Center has done much work in the region to assist governments with introducing laws and implementing actions to help clean-up the environmental damage done during the Cold War. The Center has also helped raise awareness of environmental issues, particularly the importance of tackling the challenges of climate change and fostering sustainable development, which are two critical priorities for the United States.

We are also honored to stand with CEU. The University has been a leader in environmental education in Hungary and this region. Earlier this year, President Shattuck and I launched a partnership to help build a Sustainable University Network of student environmental groups at 10 universities in Hungary. We are excited by the possibilities of this network and its efforts to build upon a great tradition of environmental stewardship in Hungary.

One of the other universities in the Network, the University of West Hungary in Sopron, recently hosted a U.S. Embassy Science Fellow, Dr. Andrew Gillespie from the U.S. Environmental Protection Agency, in their Faculty of Forestry. Dr. Gillespie taught a course and collaborated with Hungarian colleagues to study the impact of climate change on forests in North America and Europe. During his Fellowship, he often spoke about the importance of trees and forests not just in the countryside, but also in cities.

Therefore, I am very happy to plant this tree of friendship in one of the most beautiful urban parks in Budapest. Urban parks provide a beautiful setting for families and neighbors to enjoy each other’s company. They can also improve air quality in cities, provide shade on warm days, and assist with carbon capture to help mitigate the increasing impacts of climate change.

Once again, on behalf of the Embassy family, I would like to thank the Mayor, the Council, the students and civic organizations in the District, the landscaping company – FŐKERT, and Central European University for joining in this effort and helping to clean-up and beautify our shared neighborhood.

My warmest greetings to Ambassador Bell, Mayor Szentgyörgyvölgyi and all who have come together to celebrate Earth Day, express our commitment to protecting the environment, and honor the longstanding friendship between the 5th district of Budapest, CEU, and the United States Embassy by planting a tree in this beautiful downtown space.

At CEU, within our campus just a few short blocks away, we have a tradition of celebrating Earth Day as a time to reflect on our commitment to sustainability both from an academic perspective, as an institution of higher education with a Department of Environmental Sciences and Policy, and an institutional perspective, since we promote environmentally conscious practices and behavior on many levels.

We are also committed to civic engagement within our home community here in the 5th district of Budapest. We have reiterated that commitment by embarking on an exciting campus redevelopment project that will provide the district, its residents and businesses, with a modern, welcoming public space including conference facilities and presentation spaces. We look forward to continuing to be an active part of the civic life of the 5th district. CEU currently hosts over 700 events per year both academic and cultural that are open to the public, and this will continue in our new space.

Our renewed campus will reflect our commitment to sustainability at the highest levels. It will be an energy-efficient, environmentally friendly space for teaching, learning and exchanging ideas. It’s important to note that the design and construction of the project itself has been implemented according to internationally recognized environmental standards.

Last but not least, as a university accredited both in Hungary and the U.S., CEU is pleased to commemorate and reflect upon the longstanding relationship between the two countries. CEU partners with the United States Embassy on many levels throughout the year, and education for sustainable development is currently one of the most significant areas of cooperation.

Thank you very much.