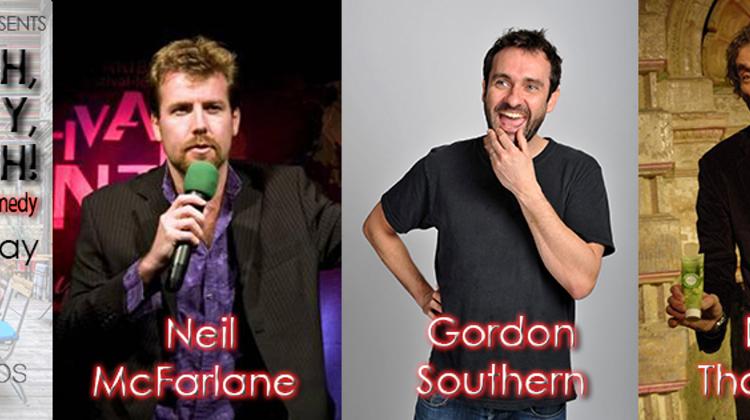 On Wednesday 13 May, Brody Studios presents the eleventh in the series of English comedy nights hosted by Dave Thompson, best known as a brilliant one-liner writer and performer in Harry Hill’s TV Burp, and former Tinky Winky from ‘Teletubbies’.

This comedy night features international stars Gordon Southern and Neil McFarlane. Gordon is the international word clown. His upbeat and energetic delivery combined with his fantastically funny observational comedy and quick witted improvisation has secured his place as an audience favourite all over the world.

He is a regular at many top clubs including the famous London Comedy Store. A talented actor and award winning writer with critical acclaim for numerous projects that he has worked on, Gordon has written for some of the most memorable comedy shows of the last decade.

Neil started his comedy career in Scotland 14 years ago, where he remains a regular act at the highly-regarded Stand Comedy Clubs in Glasgow & Edinburgh. He reached the Scottish regional final of the BBC Comedy Awards in 2001, so technically that means he’s been on the telly (for the 7 people who had BBC CHOICE at the time). If you really want to stretch the point, he’s also been on ’15 to 1’ twice, and has the dubious honour of being the only contestant in the show’s history to have been told off by William G. Stewart for slouching.

Tickets must be purchased in advance:
Contact  Jodie by clicking here +36 70 637 6289 with all enquiries