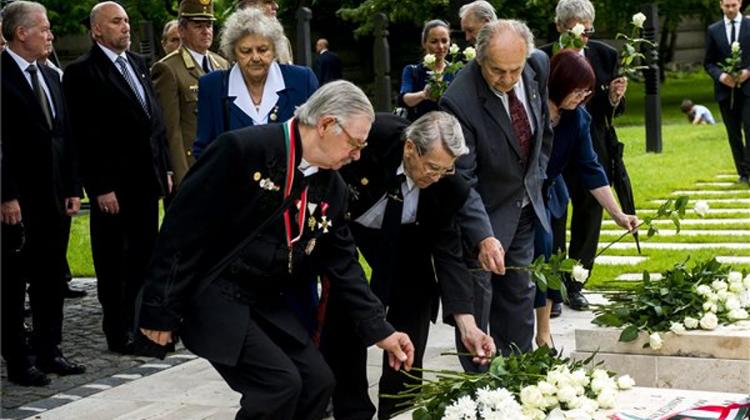 After 57 years, the example set by Hungary’s martyred prime minister Imre Nagy “still demands our respect”, parliament’s deputy speaker Gergely Gulyás, of the ruling Fidesz, said. The hanging and dishonourable burial of Nagy and other martyrs, as well as the mass revenge that followed Hungary’s failed 1956 uprising against Soviet rule, made it clear that the practice of power pursued by communists was incompatible with European civilisation and all the values that made Hungary belong to a Christian state and the western world for a thousand years, he said.

The memorial service held in central Budapest’s Martyrs’ Square was also attended by Chief of General Staff Tibor Benkő and representatives of several state and civil organisations. Imre Lezsák, another deputy speaker, told a memorial event in parliament on Tuesday that Hungarians always joined forces in great moments of history, such as in 1956 and in 1989.

Opposition Együtt party leader Viktor Szigetvári told the event in Martyrs’ Square that Nagy chose the West in 1956 because he recognised that Hungary had no future in the East. “It is a shame that an opposition party in Hungary in 2015 needs to point this out as a relevant issue,” he added.

The opposition Liberals said in a statement that Hungarians should fight against all efforts that aim to shrivel democracy. June 16 marks the day when Nagy was executed in 1958.

A ceremonial reburial held in Heroes’ Square in 1989 has become a symbolic event marking the end of Communist rule in Hungary.