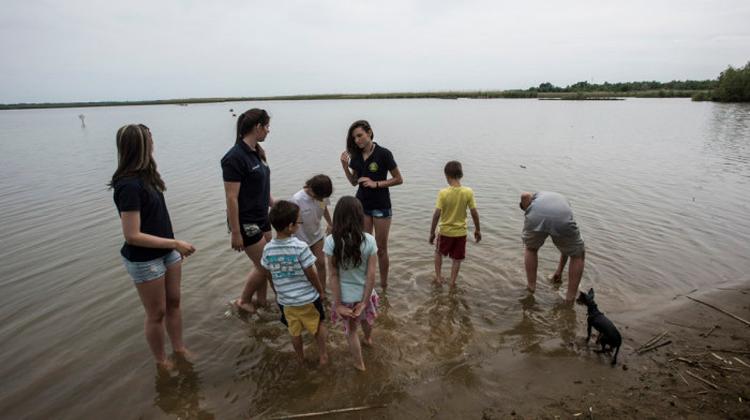 A high schooler from the elite Budapest district of Rózsadomb spends a weekend at lake Tisza. But it is not time with friends to blow their parents’ money while lazing around in the beach. These students make paper airplanes and play football with the disadvantaged children of the local orphanage.

A foundation has made it possible for them to meet. During the program students learn acceptance, and the fact that there is a life, a different life, outside of the walls of their elite school. For the orphans, spending time a sandy beach is like being at the seaside.

“Ákos, come quick, the little one lost a tooth!”

The mouth of the six year-old little boy with glasses is bleeding, but he is not crying. Those surrounding him seem much more frightened than he is. They played football and someone unintentionally hit him with the ball. He sobs twice but after ten minutes, he was already walking around the camping with a pack of chips. He is living in an orphanage in Budapest, but this weekend is his holiday.

He is spending it with the student volunteers at the Age of Hope Foundation at Lake Tisza in Northeastern Hungary. The foundation mainly deals in helping the needy: they distribute clothes and donations, organizing holiday trips for disadvantaged children, or Christmas programs and presents in the poorest villages.

Many of the students come from the sports association, but there also are children from elite high schools in Buda, as well as some who are coming from families of billionaires. They have a GPS trekking tour in the weekend, as well as kayaking, group cooking, football matches, and making paper airplanes. The time spent here counts towards the compulsory high school volunteer requirement. But the vast majority of students do not come for this says Ákos Tóth, the founder of the NGO.

“This kind of volunteering has a great impact on teenagers” says Péter, one of the fathers. His three sons often participate in the programs of Age of Hope advertised at the school. At Lake Tisza there is only one of those sons volunteering right now whom Péter was visiting accompanied by his wife.

“These kids, mainly those who are coming from richer families, are afraid of a number of groups of people such as the homeless and the Roma. They mostly live in the 12th district where they attend elite schools with little opportunity to encounter real life.”

One of his favorite stories is in connection with his own son. He was encircled in Budapest’s Moszkva square by young Roma asking him for money. He did not run away scared as most of his peers would do, but started to converse with them, telling them that he really did not have any cash on him.

Then he left without so much as a bad word. If those guys had been more violent, a chat probably would not have mattered. But the story shows how Péter’s attitude has changed since he is often visiting Roma neighborhoods as a volunteer parent.

Ákos is strict in many aspects of life, which is why he told them not to pick up the little boy with the broken tooth. “This is a rule, we do not carry, hug or cuddle the little ones. We are not their parents. The volunteers are not allowed to form too strong an emotional bond with the children, as it might well be that they will never see each other after this summer” he explains.

Despite that, during the day it is difficult to resist hugging or patting the children. According to Ákos any sense of pity on the part of the volunteers should be concealed from the children, who need to be treated equally. One of the little girls’ mother is in prison, but there are children at the weekend who were taken away from abusive, molesting and even families that used drugs.

They bring approximately ten children on a trip. Among them is a four year-old girl everyone calls Pocahontas because of her long brown hair and little skirt. She does not talk a lot but rather collects flowers for Ákos, bringing them to him. Once I overheard her laughingly remarking “sandy seaside beach” and saw her twirl around twice barefooted. Before that, she waded in the lake. All of the kids here seem restrained, with no trace of loud or boisterous activities. They just run around, playing hide-and-seek.

According to Ákos it is not a bad experience for the children to return to a foster home after such a weekend. “They are happy that they had such a great time, and cannot wait for the next occasion.” In summertime, some of them are brought to the Croatian seaside, as Ákos managed to rent two resorts for a low price. It will however be a difficult selection.

Petra, a 14 year-old with a mild mental disorder, for example is not eligible, even if Ákos states that she is there on every organized event. The short girl has a real leading personality: her voice can be heard all the time, and she is always there where something is happening, having an opinion about everything.

She even remarks that she would never be a journalist, as it is supposedly “unbearable” to write every day. She wants to be a juggler, but this does not interest her at the moment. She is more interested now in the graduation ceremony for the 8th graders. She is in the seventh grade and her class is supposed to organize the event. When I ask her what is so good about that, her answer is: standing in a line and reciting poems. She is always the one reciting poems at ceremonies.

In the camp, children and volunteers sleep in houses containing six or seven beds. The volunteers do the cooking, washing up, shopping, and if need be, attend to the children all day instead of to one another. None of them are reserved.

According to Ákos most of them cannot be stopped from visiting social media sites otherwise. “There is a constant flow of photos, here a selfie, there a picture with the buddies. And when suddenly they upload a photo on Instagram in which they are giving out foodboxes in a Roma slum, their classmates are surprised, asking what it is, and in the end they all want to join.”

Applications to the foundation are constantly coming in. But if Ákos sees that some of the volunteers are not completely dedicated, only participating because of the fun, then he thanks them and asks them not to return.

In the afternoon, one of the volunteers wants to take two kids cycling. One of them is not allowed by Ákos as he does not think he will be safe to cycle alone. The disappointment on the child’s face is visible, but in the end, none of them goes, as according to the volunteer it would not be fair. Instead, all of the kids attend the GPS orientation race.

They form four groups, and start to wonder around villages. Petra is the leader, constantly explaining everything in her deep voice, running between the groups. She only asks me if I could put her water bottle in my bag, as she did not feel like carrying it along. She does not want to talk to me. An adventure is taking place, so I should leave her alone.