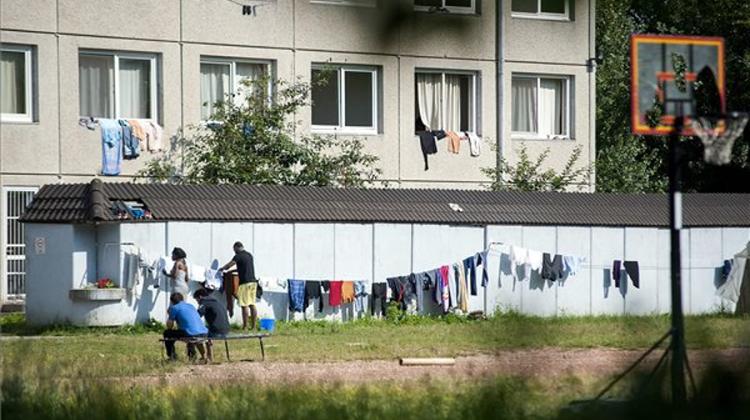 The Vámosszabadi refugee camp in southern Hungary is dangerously overcrowded. There refugees can choose between sleeping side by side on cots indoors or sleeping in tents where temperatures reach 110 degrees. Others opt to sleep in a small wood nearby. There are not enough toilets. Garbage is everywhere.

The experience is not only trying for the refugees but also for the staff. Members of the press have been forbidden by the Office of Immigration and Nationality (BÁH) from visiting the camp. With the help of a Socialist member of parliament, abcug.hu was able to obtain some photographs from inside the camp.

Amidst unbearably crowded conditions, the more fortunate of the refugees sleep slide by side on used cots. Those less fortunate must sleep in tents pitched in the blazing sun. Of the latter, many prefer sleeping in a nearby wood despite having to brave mosquitoes from a nearby lake.

We know this not because we obtained a permit from the Office of Immigration and Nationality to enter the camp. The press is forbidden from entering the camps paid for by Hungarian taxpayers. Both the Hungarian Helsinki Committee and the Hungarian Civil Liberties Union (TASZ) believe that BÁH’s actions constitute an infringement of the right of the free press and citizens to inform themselves, and for this reason TASZ has formally requested the Ministry of Interior to modify this practice, but this has yet to happen. However, since members of parliament may enter refugee camps, we sought one who was willing to do so. In the end Hungarian Socialist Party (MSZP) MP Ágnes Kunhalmi agreed to allow us to accompany her to the Vámosszabadi. refugee camp. In addition to taking the following photographs in the camp, we spoke to some refugees outside the camp about conditions inside.

“Behind the door we sleep in corridors, in tents and on the ground, depending on who find what place for himself,” says Vjacseszlav at the entrance to the camp. He escaped Ukraine with his wife and two daughters. Around 1 pm they left the camp to bathe in the Danube because it had become unbearably hot.

“Conditions wouldn’t be so bad in the camp if it wasn’t so terribly overcrowded,” says the asylum seeker. “However, the crowd is unmanageable. One must fight for a place. Everything depends on whether those already living there allow one to enter their room.”

Those failing to obtain a place for themselves in a room must either sleep in a hot tent or in“the jungle”—a small wood nearby—where they must contend with mosquitoes. Eight sleep to a room on average. Those in charge of running the camp try to keep families together and prevent religious conflict, such as between Christians and Moslems, by keeping them separated.

This is not always an easy task as presently some 20 different nationalities are residing in the camp. For this reason conflict is unavoidable, such as the time two Moslems got into a fight over who was the greater Moslem. In such cases the rules require that the police be called in. However, there is little for them to do because by the time they arrive the parties have usually made up.

The Vámosszabadi refugee camp was originally planned for 216 people–300 with the use of supplementary tents. Presently there are some 750 people competing with one another for limited space. In the panel building, around eight people at a time can access the bathroom and its single toilet, which are in relatively good condition.

However, the crowded conditions can be seen here as well. Jalaluddin from Bangladesh says there are not enough bathrooms. An even greater problem according to him is that hardly anyone speaks English and for this reason are unable to ask for help from their minders.

The inhabitants of the refugee camp receive three meals a day, but some rooms are equipped with cookers where they can prepare food. “The food is not very good,” complains Vjacseszlav. “The soup, for example, is sweet. At first I thought this was some kind of local speciality. But then it turned out it wasn’t.”

Apart from the overcrowding, the biggest problem is the accumulation of garbage. Camp workers are so overburdened that they have no time to clean up.

According to the camp’s website, inhabitants “have the opportunity to take Hungarian lessons and engage in sports activities, cultural activities” as well as group activities in which they learn about Hungarian customs, culture, history and literature.

The refugees we asked were not able to cite many examples of this and complained that there is little in the way of playground facilities for children. Primarily NGOs occupy the children. Inhabitants are not left entirely to their own devices, though. In order to minimize tensions, air-conditioned rooms have been introduced and there is a prayer room for the religious.

The refugee reception station is staffed with general practitioners and pediatricians but no dentists. Attila Gláser, the head of the camp, says it is the responsibility of the Vámosszabadi local government to supply a dentist, but that the town claims it has none to offer. For this reason, it sometimes happens that inhabitants must pay for dental treatment. In some cases refugees with training in dentistry attend to the others.

Making the best of a difficult situation

Ágnes Kunhalmi says it was apparent during her visit that “camp employees are performing superhuman work and are completely exhausted. The doctors often work late into the night, and many prefer to work rather than take their vacations.” For this reason the socialist MP thinks it important they get adequate rest. In this way the camp workers try to make the best of the situation in which they find themselves living together with refugees in bad conditions.

“I saw many sad faces in there,” says Kunhalmi after the visit. “Most of them did not allow me to photograph their faces, which is understandable, of course. Their lives seem hopeless. But at least they are happy to have a roof over their heads.”