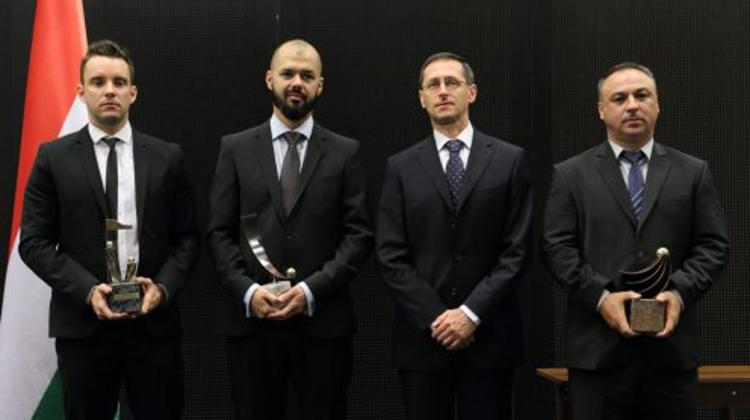 The Government holds enterprises in high esteem and helps them to extra funding by publishing calls for tender of operative programmes until the summer of 2017, Minister for National Economy Mihály Varga said at the presentation ceremony of the Awards for Successful Enterprises in Budapest at which the Minister this time honoured tourism enterprises.

The event, the Minster pointed out, marked the second anniversary of the establishment of the award through which the Ministry for National Economy aims to highlight and distinguish enterprises which assume a significant role in Hungary’s economic progress with their excellence at home and abroad.

The jury has over the past two-year period honoured 63 companies that are still operating today and produce high added value, Mihály Varga stressed.

Macro-economic indicators also show the success of enterprises: in 2014, investment totalled more than HUF 6800bn, and thus the country’s investment rate of 21.3 percent exceeded that of the Visegrád Four. The Minister called it a common success that the economy has been expanding, its structure has become more balanced and last year’s GDP growth of 3.6 percent placed Hungary among the fastest growing countries of the European Union.

The Minister also underlined the fact that the number of people in employment is the highest since the regime change in 1990 and since the change of Government in 2010 this number has risen by 491 thousand, of which 290 thousand people worked in private sector jobs. These positive results, Mihály Varga stressed, have been the consequence of a prudent fiscal policy and not higher state debt.

The estimates of the Government are more and more in line with those of major international institutions concerning the next one-and-a-half years. As the Minister added, he hopes that credit rating agencies will also soon share the view of the Government.

The Government aims to pursue re-industrialization policy and to this end 60 percent of avaialable EU funding is to be spent on economic development.

Speaking of tourism, Mihály Varga said that the sector had a bumper year in 2014 and the positive trend is expected to continue this year.

The event’s guest, Sziget (Island of Freedom) Ltd CEO Károly Gerendai said that the company’s turnover this year totalled HUF 13bn and in spite of fierce competition in this segment the Island of Freedom project has managed to increase the number of visitors. In this season, 69 thousand tickets were sold for the event and the number of tourism nights registered at commercial accommodations reached 400 thousand.

The winner of the “Investor of the Month” award, Demjén Thermal Spa Ltd completed an investment project of HUF 1.5bn in January 2015, which created the largest cave bath of Central Europe. Hotel manager Emil Martini pointed out that the company has been operating a thermal bath resort in Demjén since 2007, which has by now become a renowned tourism complex.

The “SME of the Month” award went to Szent Donát Estate and Márga Bistro, a family enterprise with a 7-ha estate the vicinity of Csopak. As CEO János Deli said, the company aims to attract guests all over the year, also outside the Balaton high season.

ThePass Ltd received the “Startup of the Month” award for an on-line hotel management application which has been used by several hotels in Turkey, Thailand, England, Austria, Switzerland and Germany. Owner Szabolcs Hermann said that the award is an important gesture for the company and they also wish to become a small or medium-sized enterprise or a major investor.