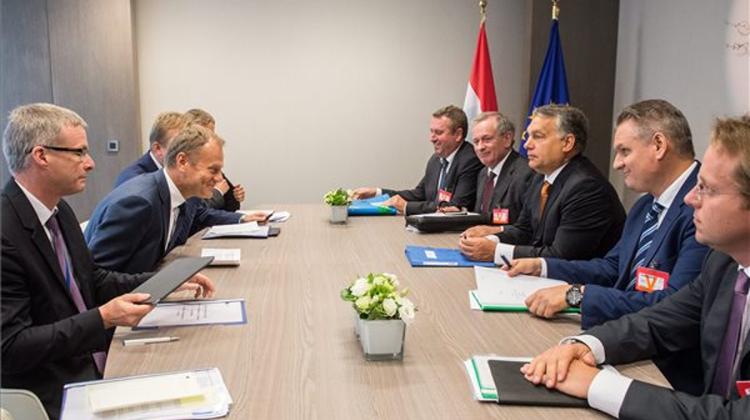 Prime Minister Viktor Orbán have warning that the current migrant crisis may spark an “explosion”, and he defended Hungary’s decision to build a fence along its southern border with Serbia, in an op-ed article published by Frankfurter Allgemeine Zeitung. “What we are witnessing today threatens Europe as a whole…” the premier said, noting that so far this year nearly 150,000 “illegal immigrants” have arrived in Hungary, “three and a half times as many as in 2014 and the year is still not over”.

“Europe is no longer stifled by a ‘refugee issue’ or a ‘refugee situation’ but threatened by a modernage migration wave…” Orbán noted that immigration is also a lucrative business which is exploited by dangerous and unscrupulous criminal gangs, which had earned it nearly 16 billion euros, causing the deaths of 30,000 migrants since 2000.

“What is happening in the high seas, on the roads and along our borders is inhumane, and what Europe is doing is madness.” Orbán put the blame on the EU for what he called an “inappropriate” immigration policy.

“All European politicians who, holding out promises of a better life, encourage immigrants to leave everything behind and head for Europe, risking their lives, are irresponsible,” he said.

The prime minister said that priority should be given to the protection of external borders, and called the Schengen zone one of the greatest achievements of European integration.

For central Europeans, he said, free movement within the zone is an “experience of freedom” and therefore “highly important”.

Failure to protect the borders, however, may endanger the Schengen regime, Orbán said, calling it “rather depressing” that apart from Hungarians and Spaniards, “no one wants to protect Europe’s borders”.

Europe “should understand that those who are invaded cannot take in anyone. And now there is an invasion,” he said. He said Hungary is building the fence on its southern border “not for fun but out of necessity.”

Issues besides border security, such as the question of how many people Hungary intends to take in or whether the quota system should be implemented, “should only be discussed once we’ve managed to stem the flow of migrants,” the prime minister said.

The migrants “were brought up under a different religion, meaning that they represent a culture fundamentally different from ours,” Orbán said, noting that most of the migrants are Muslim.

“This is important because Europe and being European has its roots in Christianity,” he said. “If we lose sight of this, our values may end up being in minority on our own continent,” Orbán added.